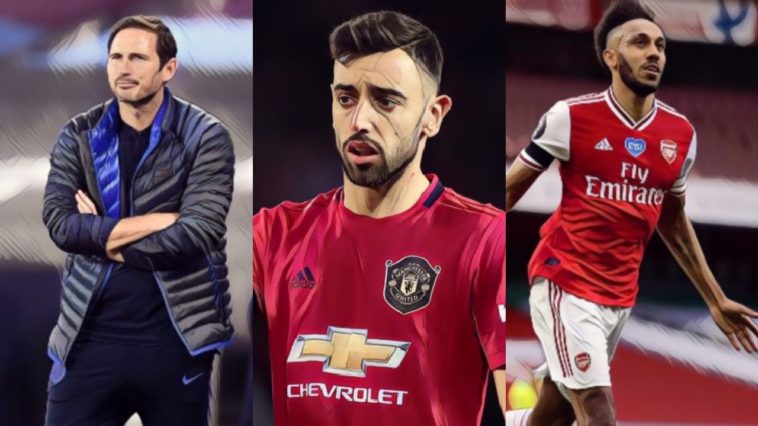 Bruno does it again

Another week, another Bruno Fernandes masterclass, as the Portuguese playmaker made another claim for being the best signing of the season

The Manchester United midfielder scored twice in their 3-0 win over Brighton during the week, leading his team in shots (4), shots on target (2) and passes into the box (6). And he did so having played 120 minutes against Norwich City in the FA Cup at the weekend.

Fernandes has now made eight starts since moving from Sporting, contributing five goals and three assists. His eight goal involvements are the most of any player in the league during that time, while he is also the second top goal scorer – one behind teammate Anthony Martial’s six. He also leads the league in assists and total shots (30).

United have yet to taste defeat since Fernandes’ signing and are the second-most in-form team in the league at the moment behind Wolverhampton Wanderers, having won four of the last five games and drawing the other against Spurs.

Fernandes’ link-up with Paul Pogba has also begun to bear fruit, with United scoring scoring six times in the two matches they started together. Importantly for United, they have also improved considerably at the back, keeping 10 cleans sheets in the league and 23 in all competitions.

Interesting that @ManUtd have kept 23 clean sheets in all comps this season – only PSG in Europe’s top leagues have kept more than that.

Has Lampard done a good job at Chelsea?

On the opening day of the season Chelsea were thrashed 4-0 by Man United at Old Trafford. It was, perhaps, an unfair scoreline on the balance of play and since then the Blues have surpassed the Red Devils, in terms of the table at least (they have since lost twice more to the same opponents).

Manager Frank Lampard received an abundance of praise for the subsequent turnaround, some of which was certainly warranted. The former midfielder integrated a number of youth prospects into the first team, with Fikayo Tomori, Mason Mount and Reece James in particular looking impressive in their first full top flight campaigns, while also playing a style of football that is easy on the eye.

As evidenced by the 3-2 defeat to West Ham United on Wednesday, however, many of the same problems that blighted the south west London outfit on day one have not been fixed. With most of the season now behind us, that should concern Chelsea fans.

Much like United that day, the Hammers found great joy against their local rivals on the break, pouring through the visitor’s defence like a sieve. The hosts could have easily had four goals considering their bad luck with Tomas Soucek’s disallowed effort in the first-half, and Chelsea only kept themselves in the game thanks to a penalty and an exquisite free-kick from Willian.

Of West Ham’s 11 shots in the match, nine were from inside the box, an indication that Chelsea are still giving up high quality chances to the opposition. This is understandable if its happening against the top teams in the league, not one of the very worst.

Indeed, Chelsea’s defence is the second worst in the top half of the table, their 44 goals conceded one behind Burnley. The Clarets (13) are also the only top half team to have endured more defeats than Chelsea’s ten thus far.

They are currently nine points worse off now than they were at the same point last season, after which Maurizio Sarri left the club as an unpopular figure. Just a few months ago Champions League qualification looked a nailed-on certainty, but now they are being hunted down by both Wolves and Man United.

No one expected Chelsea to be the finished article just yet, but the team’s flaws should have been ironed out to a greater extent by now.

Five of the most iconic goal celebrations in Premier League history

Pierre-Emerick Aubameyang nabbed a brace against Norwich City on Wednesday evening in a routine 4-0 victory for Arsenal, taking his tally for the season to 19 goals. That puts him on top of the scoring charts, level with Jamie Vardy, and virtually in pole position to win the Golden Boot for the second year running.

Last year the Gabonese international secured that honour alongside Liverpool’s Mo Salah and Sadio Mané, who each scored 22 goals. Aubameyang has now scored an outrageous 51 goals in 70 league appearances for the Gunners, unsurprisingly the most of any player in the time since he signed for the north London outfit.

The striker has now scored a total of 240 goals in 430 club appearances across his career, meaning he finds the net at an impressive rate of 1.8 games per goal. What’s most remarkable about this is that he has never played for one of the elite clubs, instead consistently putting up huge numbers for the likes of St. Etienne, Borussia Dortmund and his current team.

No Arsenal player has reached a half century of Premier League goals quicker than he has, which makes tying him down to a new deal all the more imperative for the club.

When the Saints go marching in (to an opposition stadium)

Southampton reached the magic 40 point mark earlier this week when they soundly defeated Watford 3-1 at Vicarage Road. That victory means the Saints’ away record shows eight wins, two draws and six defeats; the fifth best record away from home in the top flight.

It’s a remarkable statistic for a side residing 14th in the table and were looking odds-on for a relegation battle at one point in the campaign. Their form away from St. Mary’s has truly been their salvation this season, as they currently possess the worst home record in the league, having won there just four times in 16 games.

Their ten home defeats is the most of any side in the division, which is saying something given the rotten form of some of the teams below them in the table. Perhaps they would have fared even better had all games after the restart been moved to neutral venues.

Liverpool lose on the road again

They may be Premier League champions, but Liverpool were soundly beaten 4-0 by Manchester City on Thursday night. It’s a mere consolation win for Pep Guardiola’s charges, but a reminder that they are still there and will be striving to regain the title next season.

For the Merseyside outfit it was a rare defeat, just their second of the league campaign. But it was also the fifth time in a row that Liverpool have failed to win away from home in all competitions, losing to Atletico Madrid in the Champions League, Chelsea in the FA Cup, and Watford in the Premier League before drawing with Everton at Goodison Park.

They have also failed to score in each of those matches while conceding a startling ten goals.