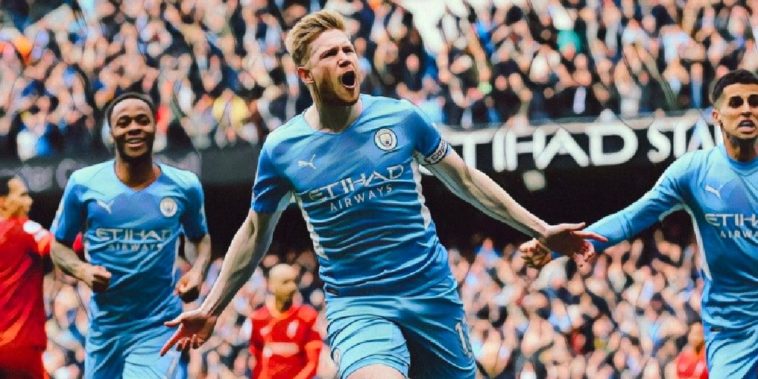 It’s a case of as you were at the top of the Premier League after Man City and Liverpool played out a thrilling 2-2 draw at the Etihad this afternoon.

Pep Guardiola’s defending champions have a habit of starting home games in an electric fashion and today was no different with the Citizen’s skipper Kevin De Bruyne at the forefront for his side. After five minutes the Belgian international split the Liverpool defence, but unfortunately for City, Raheem Sterling fired Gabriel Jesus’ pass straight at Alisson from eight yards out.

Just a minute later, City would be able to forget Sterling’s miss when De Bruyne breezed past Fabinho in midfield and his left-footed shot took a deflection off Joel Matip and spun agonisingly beyond Alisson’s reach and in off the post.

Liverpool looked visibly rattled by City’s rapid start, but on 12 minutes Diogo Jota pulled his side level. The Portuguese attacker has so often been Liverpool’s man for the big occasion since signing for the Anfield outfit in the summer of 2020, and he finished smartly from the last edge of the six yard box after a classy cut back from Trent Alexander-Arnold.

The game continued at a frantic level of intensity thereafter, and while Liverpool did begin to gain a foothold in the game, it was City who looked the more dangerous, with both De Bruyne and Joao Cancelo shooting just wide.

10 minutes before the half-time break City would finally get the goal the quality of their play merited. Cancelo whipped a ball in behind the Liverpool backline and the impressive Gabriel Jesus finished expertly into the roof of the net.

Having been outplayed for large parts of the opening period, Liverpool boss Jurgen Klopp would have expected a response from his side and less than a minute after the restart he would get just that. Mohamed Salah slipped a beautiful ball in behind Kyle Walker and his long term partner in crime, Sadio Mane, raced onto it and fired a fine finish into the top corner.

On the hour mark, Sterling thought he had given his side the lead against his former club with a tidy finish under Alisson after yet another defence-splitting pass from De Bruyne. However, Sterling and City’s celebrations would be short lived with VAR stepping in to rule the goal out for a marginal offside.

Despite a massively improved performance from Liverpool in the second half, Guardiola’s side always looked the more likely to find a winner and in the final minute of injury time substitute Riyad Mahrez was handed a golden opportunity. After being played through by De Bruyne the Algerian elected to try and chip the onrushing Alisson, only to see his effort rise high and up over the crossbar.

Today’s result sees City remain a point ahead of Liverpool with seven games to play and speaking afterward the superb De Bruyne reckoned his side did enough to secure all three points.

“It was hard,” De Bruyne told Sky Sports. ”To be fair I think we played excellent. The way we played was very good and we should score more. It is what it is. It was a great game.

“I think it should [be more before half-time] but we were still winning. The way the second half started is the disappointment. I think we played great and created enough chances to win the game.”

De Bruyne also insisted that he thinks this season’s title race still has plenty of twists and turns before the Premier League title is handed out in May.

”I know people said whoever wins gets the title,” the Belgian playmaker said. ”But it’s too hard, the schedule is too tough for both teams to win every game, but we will try.”

Read – Five of the best ever Premier League ‘title deciders’