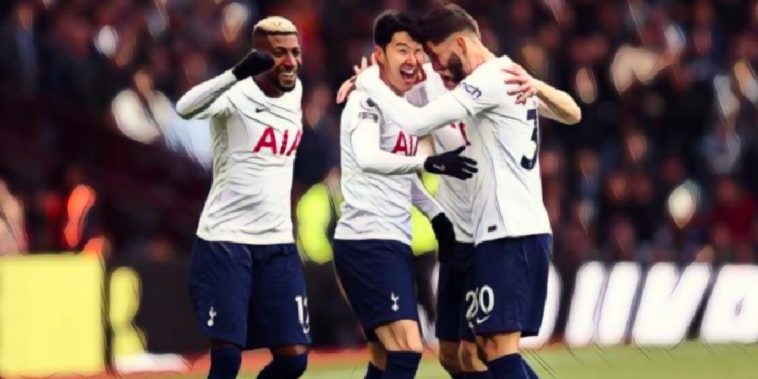 Tottenham bolstered their hopes of what had once looked like an unlikely fourth placed finish with a 4-0 victory over Aston Villa at Villa Park.

Spurs came into the game in fourth place following Arsenal’s 2-1 defeat to Brighton in their three o’clock kick-off, and Antonio Conte’s side got themselves off to the perfect start as they went in front in just the third minute.

Defender Ezri Konsa made a real mess of a headed clearance that fell invitingly to Harry Kane, and while the England skipper’s strike was initially going well wide, it hit Matty Cash and dropped perfectly for Son Heung-Min. The South Korean connected beautifully with the dropping ball, his instinctive left-foot volley flying into the bottom corner.

While Spurs had the lead, it was Villa who were the better side in the first period, with Philippe Coutinho a real bright spark for the hosts, though they were unable to convert any of their 14 first-half attempts, with Hugo Lloris making seven saves.

Villa would be made to pay for not taking their chances, and having taken the lead early in the first half, the North London outfit repeated the trick in the second half. A long punt upfield by Lloris was smartly flicked on by Harry Kane, the striker’s header finding the run of Dejan Kulusevski who latched onto the ball and fired low across Emi Martinez to find the bottom corner.

Spurs extended their lead midway through the second half, and once more, it was Harry Kane who created the goal. The 28-year-old produced a superb guided header by the halfway line to pick out the run of Son, the forward racing in behind the Villa defence and firing past Martinez, in what was Kane and Son’s 40th goal combination.

The South Korean then completed his hat-trick – the sixth of his career – with 18 minutes to play, Kulusevski unselfishly teeing up his fellow forward who was unmarked at the edge of the box, before he stroked home.

17 – Son Heung-min has scored the most non-penalty goals of any player in the Premier League this season:

The win moves Spurs three points clear of Arsenal with seven games to play, though the Gunners have a game in hand, and having thanked the travelling support, Antonio Conte praised his side’s ‘resilience’ and ‘chemistry’.

“We know the difficulty of playing Villa away,” he told Match of the Day. “This stadium had a great atmosphere and I want to thank our fans because they were not in the same number but they pushed us from the start to the end – so to give them this type of satisfaction is great for us. We work to improve the players but also to make our fans satisfied about their team and that happened today.

“We are pleased – not an easy game but we showed resilience in the first half when Villa tried to push a lot and put a lot of pressure on us. Every time we tried to play the ball and have a chance we did score.

“To be resilient is important if we want to be a top team, in every game there are moments when the opponent can create difficulty and if we are not strong you will never win something or do something important.

“We are going in this aspect, I’m very happy because I have a group of players who want to show me that they will improve in many aspects. When you have this you have to be happy to work with them and to try to do something important at the end of the season. Seven games to go and we are showing that we are deserving to stay in the race for a place in the Champions League.

“Hugo [Lloris] was amazing – we are talking about a keeper that has won a World Cup and everything with France, the captain of his national team and us. Important for us because of his experience, today we needed him and he answered very well.

“We created a good chemistry between ourselves and we can speak about Son [Heung-Min], but don’t forget Harry [Kane] and we have players on the bench who are important in Lucas [Moura] and Steven Bergwijn. We need to continue to work with this application and intensity and desire because the club deserve much better than fighting for fifth, sixth or seventh. I like to be competitive.”