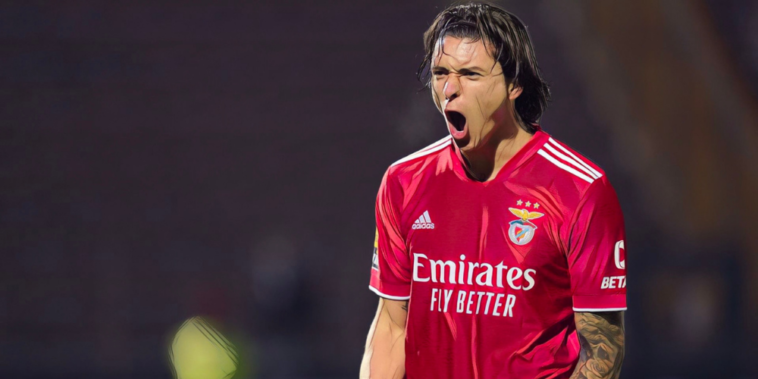 Scouts from several Premier League clubs were in attendance at the Estádio da Luz this week, as the list of clubs monitoring Darwin Nunez grows ever larger.

Nunez’s goal was not enough to secure a result as Benfica were beaten 3-1 by Liverpool in the Champions League’s quarter-finals, but his performance will certainly have left those watching on impressed.

Uruguay might have a population of less than 3.5m, less than half of that in London, but the South American nation most certainly know how to produce centre-forwards of the highest calibre.

Nunez is the latest exciting talent to emerge from Uruguay and looks the heir apparent to Luis Suarez and Edinson Cavani for the national side, with there plenty of similarities between the 22-year-old and the long-term leaders of La Celeste.

Nunez came through the ranks at Peñarol before his big break came with a move to Europe, signing for Spanish Segunda División side Almeria in 2019.

Just one season with Almeria was enough to capture wider attention and Benfica wasted little time in snapping up the promising forward, spending a club record £20m to bring Nunez to the Portuguese capital.

Nunez had scored 16 goals in 32 appearances for the second-tier side, who – somewhat wisely – inserted a clause that will earn them 20% of a future transfer, as Europe’s elite begin to circle.

Luis Suarez had been among those to champion his compatriot’s talents during his initial breakthrough, revealing he had implored Barcelona to take a chance on Nunez.

“I recommended Darwin to Barcelona,” Suarez said in an interview with journalist Gerard Romero.

“I have 15 years of international experience, so I know a thing or two about forwards. I told them: ‘pay attention to this one, he is very good, he has very interesting things.’

Nunez’s first season with Benfica saw him score 14 goals and provide an impressive 10 assists across all competitions, but the current campaign has seen the forward explode.

He is the leading scorer in Portugal’s Primeira Liga with 21 goals from just 19 league starts for The Eagles, whilst he has added a further five goals in the Champions League.

Those teams have 21 European Cups between them. 😳 pic.twitter.com/CeeSn0w0TE

Two goals in the club’s 3-0 group stage thrashing of Barcelona introduced Nunez to Europe’s elite competition, before his header proved decisive as Ajax were eliminated in the last 16.

His goal in the defeat to Liverpool was another example of his confidence around the area, capitalising on Ibrahima Konate’s mistake to keep a cool head and finish with composure.

That goal was Nunez’s 28th of the season in all competitions, a leading total among u23 players in top-flight European football. Not even Erling Haaland or Dusan Vlahovic, two of the most exciting forwards in the sport, can match those numbers in 2021/22.

It’s little surprise that Europe’s biggest clubs are circling for Nunez, who has emerged as an attainable and attractive option among a collection of promising centre-forwards on the continent.

Brighton, Newcastle and West Ham have all tried and failed to prise Nunez from Benfica in recent windows, though there is a sense that the forward is destined, with all due respect, for bigger things.

Manchester United and Arsenal have both been linked and it is not difficult to see how Nunez could improve both sides should a move to materialise.

Benfica are through to the quarter-finals for the first time since 2015/16 ✅@slbenfica_en | #UCL pic.twitter.com/A2VOHWcite

Nunez’s athleticism seems perfectly suited to the rigours of the Premier League, his 6ft 1in frame posing problems for centre-backs and aligned with dribbling skills that have tormented defences this season.

Far from an orthodox target man despite the attributes to play the role, Nunez’s best comes when running the channels and driving inwards at defenders, seeking to commit centre-backs and fire efforts on goal.

There’s variety to his finishing, too. Of his 21 league goals scored this season 13 have come from his stronger right foot, though four headers and four left-footed goals demonstrate he can find alternative avenues to goal.

Statistically, Nunez compares favourably to the men he could replace in either North London or Manchester. The underlying numbers behind his goal record better both Alexandre Lacazette and Cristiano Ronaldo, outperforming the duo in terms of goal-per-game, shooting accuracy and conversion rate in league action in 2021/22.

Lacazette’s conversion rate of just 12.12% is dwarfed by the 38.89% of Nunez this season, the latter statistic also considerably better than Ronaldo (19.35%) has managed since his return to Old Trafford.

When assessed with the Premier League’s leading scorers, it becomes even more apparent that Nunez has excelled in converting the chances that have come his way this season.

Nunez’s mobility and versatility further make him an appealing option for Premier League sides, a forward comfortable in multiple roles and with the dynamism to stretch defences.

The Uruguayan has featured from the left and in a deeper role since signing for Benfica and that multi-functional ability could lead to a big-money move this summer, with forward lines and centre-forwards now more flexible than ever before.

His unpredictable movement pulls defenders out of position and his pace and power are suited to high-octane football and leading the line.

Nunez has often worked better in partnership, but has the qualities to emerge as a sole focal point. In Suarez and Cavani, he perhaps has the ideal mentors with the national side as he fine-tunes his game.

He has scored twice in nine caps for Uruguay – including a debut goal against Peru – and will be a certain inclusion in their World Cup squad for Qatar 2022, having missed the 2021 Copa America through injury.

Weaknesses remain in his game and his ball retention – both in terms of passing and hold-up play – require improvement, but at 22 there are few forwards with as high a ceiling.

Premier League sides have had success in recent windows with imports from the Iberian Peninsula, with Bruno Fernandes and Luis Diaz two names who have made an immediate impact since swapping Portugal for England.

Nunez could be the latest in a lineage of exciting arrivals from the Primeira Liga, though English clubs will face competition from sides in Spain, with Atletico Madrid reported suitors, and elsewhere across Europe for his coveted signature.

Champions League football will almost certainly be a requirement for any side hoping to sign Nunez in the summer window, his fee set to be in excess of £60m as Benfica – one of European football’s great developers and sellers – prepare for another handsome profit.