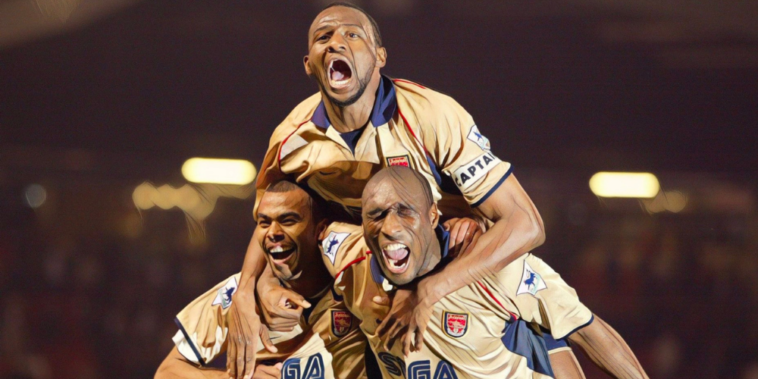 Manchester City and Liverpool meet in the Premier League this weekend, a fixture which could have huge consequences for the destination of the title.

Just a single point separates the Premier League’s top two ahead of their showdown on Sunday, with Liverpool having reduced the gap to the leaders following a ten-game winning run.

The two sides have formed a modern rivalry after going head-to-head for silverware in recent seasons and with an FA Cup semi-final clash also on the horizon, the next few weeks could add some unforgettable chapters to the tale of the two teams.

This weekend’s meeting is being billed as a potential title decider at the Etihad and ahead of the clash we’ve decided to look back at five iconic clashes between sides going head-to-head for Premier League glory.

Newcastle United seemed set to be crowned as Premier League champions following a brilliant beginning to the 1995/96 campaign, with Kevin Keegan’s ‘Entertainers‘ opening up a significant lead in the title race.

The Magpies were 12 points clear in late January, but proceeded to implode in infamous fashion as Manchester United clawed back the deficit on Keegan’s side.

The two teams met at St James’ Park in a decisive clash on March 4, with four points separating the sides as the Red Devils arrived in the North East.

Newcastle had compiled a 100% home record up until that point, but an Eric Cantona goal – alongside an inspired goalkeeping performance from Peter Schmeichel – secured a 1-0 win for the visitors.

Sir Alex Ferguson’s side slashed the leader’s lead to just a single point and Newcastle never recovered, their stuttering finish to the season continuing as the Red Devils were crowned champions.

Realistic hopes of a first league title in 69 years were shattered and despite another runners-up finish the following season, the Magpies have never come closer to a Premier League crown.

Wenger’s first full season concluded with a thrilling run of victories for the Gunners, who won an unprecedented ten games in a row to claw back a deficit and claim the Premier League title.

The momentum of the title race swung in Arsenal’s favour in mid-March, as a 1-0 win at Old Trafford put the destination of the Premier League in their own hands.

Arsenal had never won, or even scored in, an away fixture at Manchester United in the Premier League era, but Marc Overmars’ late goal secured all three points and moved the Gunners within six points of the leaders with three games in hand.

Arsenal’s win was the second in their ten-game winning run, wrapping up the title with a 4-0 thrashing of Everton at Highbury on May 3.

Manchester United’s rivalry with Arsenal remains the defining battle of the Premier League era, with the two teams sharing the championship for eight straight seasons between 1996 and 2004.

It’s a rivalry that included ferocious encounters, thrilling ties and genuine needle, with both sets of players containing a simultaneous respect and dislike for the other – all the ingredients required for an epic rivalry.

The 2001/02 season once again saw the teams contest the Premier League title and the fixture list provided Arsenal with the chance to seal the title – and a domestic double – at the home of their great rivals and the defending champions.

Arsene Wenger’s side repeated their win of four years earlier in an authoritative performance at Old Trafford, weathering early pressure before Sylvain Wiltord’s goal sparked wild celebrations from the visitors on enemy soil.

Sir Alex Ferguson had been dismissive of Manchester City during the club’s initial emergence, his famous quip after a 2009 derby win comparing Manchester United’s billionaire-backed rivals to a nuisance next door.

“Sometimes you have a noisy neighbour. You cannot do anything about that. They will always be noisy. You just have to get on with your life, put your television on and turn it up a bit louder.”

The 2011/12 season saw the noisy neighbours begin to shout that little bit louder, however, as the fast-rising Blues became embroiled in a Premier League title race with their great rivals.

Ferguson’s side had been cruising to another league title and were eight points clear with six games of the season remaining, but dropped points to Wigan and Everton provided City with a chance to capitalise.

The two teams met at the Etihad in late April and Vincent Kompany’s powerful header was the difference as City took control of the Premier League title race with two games remaining.

City failed to falter over the remaining two games, though required a stoppage-time winner from Sergio Aguero on the final day of the season to secure the championship.

In any ordinary Premier League season, January 3 would perhaps be too early to call any clash a ‘title-deciding’ fixture.

Liverpool were riding a wave of momentum heading into their trip to Manchester City in 2018/19, however, unbeaten in 20 games from the start of the season and seven points clear of the defending champions.

Three points would have given Jurgen Klopp’s side a huge advantage, whilst City knew a win was required to close the gap on the league leaders.

In a clash packed full of incident and excitement it was Pep Guardiola’s side who reignited the title race, as goals from Sergio Aguero and Leroy Sane slashed Liverpool’s lead at the summit.

Roberto Firmino had cancelled out Aguero’s fierce opener after a well-worked goal from the visitors, before Sane’s low effort across Alisson proved decisive.

Earlier, John Stones had scrambled an effort off the goal-line, with the technology showing the ball had failed to cross by just 1.12cm.

That fine margin proved decisive in the outcome of the title as both teams ended the season with remarkable winning runs, Liverpool ending the campaign with nine straight wins.

City, however, failed to blink, compiling a 14-match winning run to be crowned champions and finishing just one point clear of their Merseyside rivals at the top.