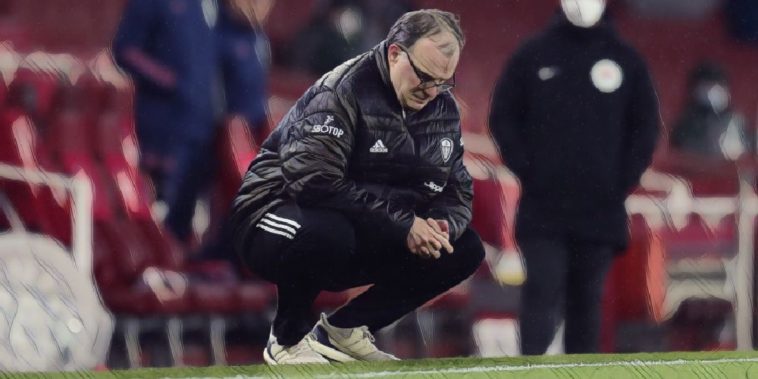 Marcelo Bielsa has opened up on Leeds’ results against the ‘big six’ this season and says his side have struggled to play as ‘equals’ against the Premier League’s best.

Leeds have enjoyed an impressive return to the Premier League this season after a 16-year absence from England’s top flight, currently sitting 10th in the division and eyeing a top-half finish ahead of the run-in.

The Whites have received plenty of plaudits for their expansive style of football this season, though their attacking approach has also seen the newly-promoted side on the wrong end of some notable results against the ‘big six’.

Leeds have conceded 3+ goals in defeats to Liverpool, Manchester United, Chelsea, Tottenham and Arsenal this season, though showed their qualities during a shock 2-1 win at Manchester City last weekend.

Bielsa’s side stunned the champions elect in stoppage-time at the Etihad, securing their most impressive result since returning to the Premier League this season.

Leeds next host Premier League champions Liverpool on Monday and Bielsa admits his side are yet to show they can match the league’s ‘traditional top six’ ahead of a huge clash at Elland Road.

“If we guide ourselves from what’s happened this season, from the results or performances, we can see against the traditional top six, only against Arsenal were we able to play against equals in the first half of the home game,” he said at his pre-match press conference.

“The second half of that game [0-0 draw at home in November] we played with one man more.

“In the game against Manchester United, we did not deserve a better result. Perhaps the margin should not have been so high, but they deserved their win, the same with Tottenham. The two Chelsea games were difficult especially the first. The draw against Chelsea we deserved, but in a game they dominated we did not deserve to win it.

“The two games against Manchester City, at home the draw was fair and in the first half of this game [last Saturday] they were better than us and in the second we were a man down.

“My conclusions are not the same as yours. We haven’t been able to play as equals against the traditional top six. To anticipate when this will happen is not prudent. These types of things, more than announce them, you have to demonstrate them and up until now we haven’t managed it.”