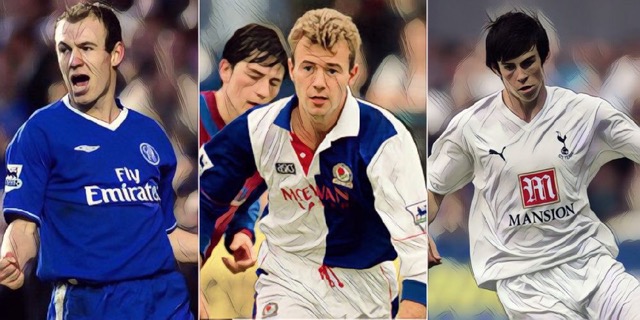 Jude Bellingham will play his football at Borussia Dortmund next season after the Bundesliga side won the race to secure one of English football’s most sought after talents, the teenager agreeing a long-term deal at the Westfalenstadion.

Bellingham’s emergence at Birmingham City saw him linked with several of the Premier League’s leading sides before signing for Dortmund, with Manchester United having registered a strong interest in the midfielder before being pipped to his signature.

Bellingham, however, is not the only prospect to have turned down the Red Devils’ advances throughout the years and following his decision to sign for Dortmund, we’ve decided to look at six of the best young stars to snub a move to Old Trafford:

Amongst the most naturally talented footballers England have produced, Paul Gascoigne had the world at his feet after bursting onto the scene with Newcastle United, the midfielder attracting interest from several major clubs in 1988 after a season in which he was named as the PFA Young Player of the Year.

Manchester United had made their interest known and a verbal deal was agreed between Sir Alex Ferguson and Gascoigne, the youngster having given his word that he would be heading to Old Trafford next season.

Safe in the knowledge he had secured England’s brightest talent, Ferguson headed on holiday, only to see Tottenham enter the fray and snatch Gazza’s signature from under the Red Devils’ noses.

The promise of a house for his parents and a reported sun-bed for his sister had persuaded Gascoigne his future was in north London, much to the anger and disappointment of the rejected Ferguson.

Gazza spent three seasons with Spurs and helped the club to FA Cup success in 1991 before joining Lazio, providing many moments of genius and establishing himself briefly as one of the world’s best.

There remains a huge sense of what might have been, however, had Ferguson added a generational talent – albeit a flawed genius – to a Manchester United side who would later dominate English football throughout the nineties.

Gazza – 15 of the best quotes about the flawed genius

Alan Shearer twice rejected Sir Alex Ferguson and Manchester United during his career, the first coming following his prolific breakthrough as a young player at Southampton in 1992.

The Saints were demanding a British transfer-record for the Geordie goalscorer and it was a fee United were willing to pay to get their man, though the club’s delay in finalising a deal allowed big-spending Blackburn to steal a march.

Blackburn had just won promotion to the top tier ahead of the Premier League’s inaugural season and were prepared to invest heavily to make an impact, Shearer convinced to sign for the newly-promoted side after conversations with Kenny Dalglish and owner Jack Walker.

He scored 112 goals in just 138 league appearances for Blackburn and fired the club to Premier League title success in 1995, before joining boyhood side Newcastle – again rejecting interest from Old Trafford – in a world-record deal the following year.

Shearer scored over 200 goals for the Magpies and became the greatest goalscorer in Newcastle and Premier League history, and whilst his status as a legend of the game is assured his silverware collection contains just a solitary title won at Ewood Park.

United signed Eric Cantona just months after Shearer first turned the club down, a signing which proved the catalyst for a dominant period in English football history as Ferguson’s side won seven of the first nine editions of the Premier League.

Manchester United’s hopes of signing Arjen Robben were dashed following the influence of their former chief executive, with Peter Kenyon having opened talks over a deal for the promising winger before moving to billionaire-backed Premier League rivals Chelsea.

Robben had been viewed as long-term replacement for Ryan Giggs and had toured United’s facilities ahead of a proposed move from PSV Eindhoven, only for Kenyon to make a late raid after leaving his position at the Red Devils to move to Stamford Bridge.

Chelsea’s lucrative offer put the brakes on the Dutchman’s move to Manchester and he instead headed to the capital, joining in a deal worth £12.1m ahead of Jose Mourinho’s first season in charge in 2004.

Robben won back-to-back league titles with Chelsea but perhaps failed to showcase his very best during three years in English football, later heading to Real Madrid before a move to Bayern Munich in 2009.

The former Netherlands international established himself as one of world football’s finest talents during a decade with the German giants, winning eight Bundesliga titles and the Champions League amongst an extensive collection of major honours.

Gareth Bale’s name has been continually linked with a move to Manchester United throughout his career and the club have shown genuine interest in signing the winger on several occasions, notably following the teenager’s impressive breakthrough from a thriving Southampton academy.

Bale had starred during his debut season as a first-team regular for the second-tier side, with England’s leading clubs taking note of the Welshman’s performances for the Saints in the Championship.

With a joint British record of 4️⃣ Champions League wins, he’s had some career! ?

Just look at these goals…? pic.twitter.com/mx7Jy5gG1L

United had registered an interest in the starlet but it was Tottenham who secured his signing, Bale heading to White Hart Lane after an initial fee of £5m was agreed with Southampton. Bale later admitted that the prospect of regular first-team football was a key factor in his decision to reject United for Spurs.

“Man United were interested in me but I wanted to play first-team football,” Bale said, in an interview with Match of the Day magazine.

“I thought I had a better chance of getting that at Tottenham.

“The manager at the time, Martin Jol, told me he wanted me to go straight into the first team.”

After overcoming a difficult start, Bale established himself as one of the Premier League’s leading lights, twice winning the PFA Player’s Player of the Year award before a world-record move to Real Madrid.

His move to Spanish football has brought a wealth of success including two La Liga titles and four Champions League trophies, Bale having scored over a century of goals for Real to become arguably British football’s most successful export.

Another Welsh youngster making a name for himself in the lower leagues, Aaron Ramsey was centre of a tug-of-war between Manchester United and Arsenal following his emergence at Cardiff.

Ramsey seemed set to head to United – the club he had supported as a boy – with the Red Devils having agreed a fee with the Championship side and many believed the youngster felt a move to Old Trafford was the best for his development.

Sir Alex Ferguson’s side were so confident of landing the midfielder that they prematurely announced a deal had been agreed for his signing, a declaration which irked the teenager who was yet to say yes to the move.

Ramsey instead headed to Arsenal, having been persuaded by the warm welcome he and his family received from Gunners’ boss Arsene Wenger. He spent more than a decade with the north London side and was an influential figure in their successes of the era, winning the FA Cup three times and twice scoring winning goals in the final.

He joined Juventus last summer on a free transfer in a bid for further success, the Bianconeri currently on the verge of securing a ninth successive Serie A title and in the hunt for an elusive Champions League.

Kings of the Bosman: Five of Juventus’ best free signings

Raphael Varane’s precocious talents had attracted the interest of Sir Alex Ferguson and the Manchester United manager was desperate to land the youngster ahead of Europe’s elite, heading to France to finalise a deal for the promising Lens centre-back in 2011.

Varane was just 17-years-old at the time but his potential was abundantly obvious, Real Madrid entering the race to secure his signing and using French legend Zinedine Zidane as their trump card in persuading the youngster to head to Spain.

Ferguson recalled his side’s failed attempts to sign Varane in his book, Leading:

“In 2011, I hurtled down on the train from Euston to Lille to sign the young French defender Raphael Varane.

“David Gill was getting into the finer points of the contract with Lens, Varane’s club, when [Real Madrid ambassador] Zinedine Zidane got wind of this and somehow scooped him up for Real Madrid from under our noses.

“I don’t think Jose Mourinho, who was managing Real Madrid, had even seen Varane play.”

Varane has since flourished into one of the world’s best centre-backs and continues to play a hugely influential role in a Madrid side now managed by Zidane, winning three La Liga titles, four Champions League trophies and the 2018 World Cup with France.