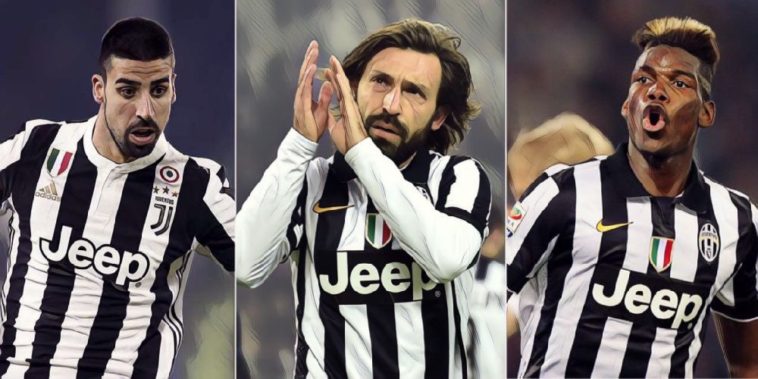 The undisputed kings of the Bosman bargain, there is no club in world football who can match Juventus when it comes to the acquisition of high-profile free agents.

Italy’s most successful club has dominated the division in recent years owing largely to their ability to manoeuvre in the transfer market, the club’s savvy recruitment team moving quickly whenever spotting a cost-efficient opportunity to strengthen.

Their continued success has led to an abundance of silverware over the course of the past decade, the Bianconeri the envy of many sides who have invested millions without close to their return.

We’ve decided to look back at some of the club’s brilliant Bosmans, here are five of Juventus’ best free signings:

AC Milan’s decision to allow Andrea Pirlo to leave for rivals Juventus on a free transfer must surely still rankle amongst the club’s hierarchy, the midfielder’s switch to Turin amongst the catalysts for the current sustained period of success for the Old Lady.

Pirlo had established himself as one of the finest midfielders in Italian football during his time at the San Siro, winning two Champions Leagues and two league titles alongside the World Cup with Italy.

Juventus goalkeeper Gianluigi Buffon – a teammate of Pirlo’s at international level – described the free transfer of the experienced playmaker as the ‘signing of the century’ and it would prove one of best pieces of business of the modern era.

Pirlo quickly became a fundamental part of a Juventus team which won four consecutive Scudetto, arguably enjoying the best period of his career to win three successive Serie A Footballer of the Year awards.

Pirlo’s performances as the club’s midfield conductor further enhanced his legacy as one of the greatest Italian footballers of all-time, an effortlessly talented playmaker and a hugely important figure in the modern history of Juventus.

Paul Pogba’s frustrations at not being handed a first-team opportunity at Manchester United saw the young midfielder seek pastures new, heading to Juventus on a free transfer in the summer of 2012.

Pogba continued to thrive over the following three seasons to establish himself as an indispensable member of the Juventus side, operating off the left-hand side of a midfield three and rampaging forward to devastating effect.

Named in the Serie A Team of the Year for three consecutive seasons, Pogba also finished as the leading assist provider in Italy’s top tier during his final season with the Bianconeri.

His performances saw him recognised as one of the finest young talents in world football and in the summer of 2016 former side United came calling – securing a world-record £89m deal to take the midfielder back to Old Trafford.

Signed for a compensation fee of around just £800,000 due to Pogba’s age, it marked an incredible profit for Juventus on arguably the club’s most memorable Bosman bargain.

Athletic Bilbao were resigned to losing their talismanic forward as his contract neared its expiry in 2013, the towering target-man having scored over a century of goals after coming through the academy ranks at the Basque side.

As ever, Juventus were ready and waiting to capitalise on one of the market’s most high-profile free agents and Llorente penned a two-year deal with the Italian giants.

The forward enjoyed a hugely productive debut season and scored 18 goals in all competitions, forming a fine understanding with strike partner Carlos Tevez as Juventus won the title with a record 102 points.

His influence waned following the arrival of Alvaro Morata but he remained an influential and important member of the dressing room, a selfless contributor who made a big impression in two seasons before returning to Spain with Sevilla.

Juventus secured the signing of a full-fledged German international at arguably the peak of his powers during the summer transfer window of 2015, Sami Khedira signing on a free transfer after five years at Spanish giants Real Madrid.

Khedira won seven trophies during his time at the Bernabeu and was a key part of the club’s midfield until an injury-hit final two seasons, though Juve moved quickly to capitalise on his contract situation as Madrid deliberated on whether to extend his stay.

The deal has proven to be one of Juventus’ best free transfers in recent years, Khedira winning four consecutive Serie A titles and three Copa Italia trophies since his arrival in Turin.

A serial trophy winner in Germany, Spain and now Italy, the industrious Khedira remains an important part of a Juventus squad stacked deeply with midfield talent.

Aaron Ramsey followed in the footsteps of the aforementioned Pogba and former Liverpool midfielder Emre Can in swapping the Premier League for Juventus on a free transfer, the midfielder arriving as the club’s latest Bosman deal last summer alongside PSG’s Adrien Rabiot.

The Welsh international spent over a decade at Arsenal and established himself as one of the club’s most influential players, but a breakdown in contract negotiations saw the star pen a lucrative contract in Turin.

It’s been a debut season of adaptation and frustration for Ramsey thus far, though he remains in contention to win a maiden league title with Juventus leading a tense title race by just a single point at present.

Ramsey revealed that Juventus wanted to sign him ‘at all costs’ last summer and his creativity and energy can prove a huge asset in his preferred role behind the club’s forward players.

The 29-year-old is arguably at the peak of his powers at present and will hope to force his way into Maurizio Sarri’s talented midfield on a regular basis, though still looks likely to make the club a huge profit should his Italian adventure ultimately result in a return to English football.