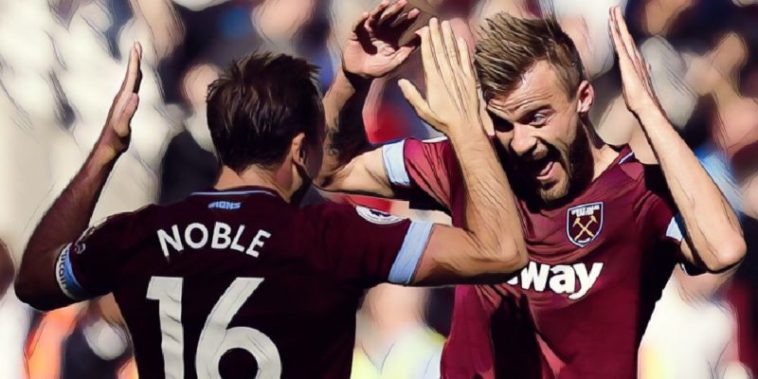 For the second season in a row, West Ham triumphed over Manchester United at the London Stadium, Manuel Pellegrini’s side running out comfortable 2-0 winners over an abject Red Devil’s side.

So poor is this current Manchester United, that the Hammers barely had to get out of second gear to win the game, with fine strikes from Andriy Yarmolenko and Aaron Cresswell doing the job for the home side.

Showed some solid handling on a couple of occasions, and made a crucial close-range stop from Harry Maguire with the scores still at 1-0.

Showed massive energy to get up and down the flank all day, and limited the threat of the lightning-quick Daniel James.

Positionally suspect at times during the opening exchanges, but all in all a solid day at the office for the French defender.

Had to walk the tightrope after an early booking for clearing out Pereira. Rarely looked troubled by United’s attacks for much of the afternoon, which of course can be looked at two ways.

Solid in defence and got forward well at times. Put the icing on the cake for the Hammers, curling in a sublime free-kick top bins late on.

Reads the game so well and distribution is always simple yet intelligent.

Has real quality when cutting in from the right and took his goal brilliantly, smashing home into the corner, giving De Gea no chance.

A real captains performance for West Ham stalwart, used all his experience to unsettle a United side clearly lacking in experience and confidence.

Yet to quite live up to the hype, but tidy in patches and will improve the more top-flight games he plays.

So often West Ham’s go-to man, the Brazilian was strangely subdued for large parts, although much of that was down to the fact he was up against the impressive Wan-Bisakka.

Not his best game by any stretch, but his sheer physical presence put United’s centre-backs on the back foot and gave his side a foothold in the final third.

Kept possession well after his introduction, helping his side to close out the victory.

Made a couple of decent stops and had no chance with either goal. The Spaniard’s new contract must be for a shit ton of money, as there is no way he signed it thinking he’d be picking up silverware anytime soon.

One of only a couple of United players that can hold their head high after today’s latest abject performance. Made one brilliant recovery tackle on Fornals in the first period and won his battle with Anderson. Needs to improve his quality in the attacking phase however.

Predictably struggled against a big target man, as he has done since he came to the Premier League. Distribution was poor, slicing the ball out of play on two occasions. Handed a big-money contract during the week, for basically being the best of a bad bunch in recent times.

The year is 2064, Manchester United are losing 2-0 away to Tranmere, while Gary Neville insists that what Ole Gunnar Solskjaer really needs is two or three more transfer windows

Nowhere near the commanding figure he has been in the first few games of the season throughout. Centre-back or not, he simply had to score when presented with a glorious chance five yards out, but hit his effort straight at Fabianski.

Clearly limited and public enemy number one among United’s at times pathetic fanbase. However, Young, unlike most his teammates, has played in top teams and with top players and it is very noticeable how often he admonishes his fellow players for their lack of game smarts.

The 22-year-old’s work-rate and desire make his a likeable young player, but on days like today, it’s crystal clear he just haven’t have the quality on the ball to be a regular for Manchester United.

Has the turning speed of an artic lorry and his lack of mobility was exposed several times during the first half, as West Ham pressed the Serb and he duly coughed up possession. Once a top level midfielder, though those days are long gone.

Showed good energy at times and put one superb ball into the box that Mata really should have scored from, however, let’s be realistic he’d struggle to get a game for most mid-table Premier League sides.

Increasingly obvious the decision to give Ole Gunnar Solskjaer the United job was based on emotion, short-term results and a complete lack of imagination. This is Manchester United, arguably the biggest club in the world. Such a poor decision #mufc

His composure on the ball and ability to pick the right pass have for years masked his physical limitations, but today, the attributes that he is renowned for deserted him badly. Missed a sitter from a few yards out and failed to play his teammates through when the opportunity presented itself on several occasions.

It’s never nice to see a player go off injured, but let’s not dress this up, this was another no-show from Rashford in the central striking position. Offered nothing in terms of link-up play and movements, his only contribution was going on pointless sprints to try block Fabianski’s kick. How long before Solskjaer starts regretting putting his faith in the much-hyped youngster as his main striker?

Solskjaer backed himself into a corner with Rashford. Helped him get new contract but not good enough. A wide forward/impact sub at best. Not his fault, but this is MANCHESTER UNITED.

Brought ‘energy’ as Solskjaer would say. Now almost 10 months since he provided an assist or scored a goal in the Premier League.