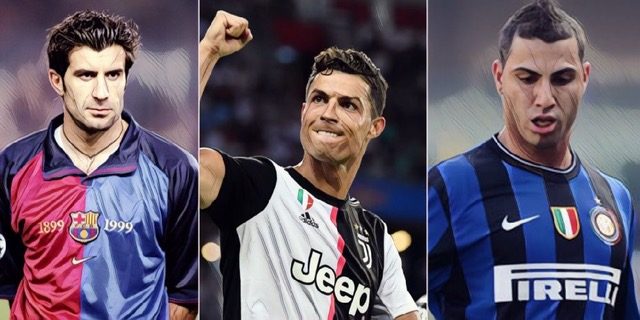 Portuguese football has long been dominated by the powerhouse clubs of the nation, the league’s ‘big three’ of Benfica, Porto and Sporting Lisbon having shared all but two of Portugal’s top flight titles ever played.

The latter of the leading trio may have fallen some way adrift during the course of the past two decades, a somewhat surprising notion given the wealth of talent produced by Sporting in the Portuguese capital.

“Effort, Dedication, Devotion, Glory.” Those are the four words young players see first and last as they enter and leave the Sporting academy, a youth system which has produced two Ballon d’Or winners and, incredibly, developed eight of the starting side that delivered Portugal’s first major trophy at the 2016 European Championships.

Sporting’s focus on allowing young players to showcase their talents and express themselves has led to the emergence of some of the most exiting Portuguese players of the modern era – the Verde e brancos having somewhat specialised in honing fleet-footed wide players.

Here’s a look at five of the best Sporting Lisbon academy products:

The poster-boy for both the Sporting academy and any young player seeking the attitude to reach the top, Cristiano Ronaldo has come some way since first showcasing his exhilarating talent in the youth set-up at the Portuguese side.

Ronaldo, of course, originates from the island of Madeira before making the move to the capital as a 12-year-old, working his way into the club’s underage sides and later becoming the first player in history to represent the under-16, under-17, under-18, B-team and first-team all within the same season.

The Ronaldo that came through the youth system at Sporting was a far cry from the player who has established himself as one of the game’s all-time greats, an electric winger with a penchant for showmanship.

Since leaving Sporting as a teenager for Manchester United, Ronaldo’s game has reached almost unparalleled heights, winning the Champions League on five occasions and league titles in England, Spain and Italy.

The all-time record goalscorer for Portugal, Real Madrid and in the Champions League, Ronaldo captained the national side to that maiden trophy success four years ago and is quickly closing in on a century of international goals – a feat no other European player has ever achieved.

“Messi is a freak, a one-off and clearly the best ever, but what Cristiano has done to be anywhere near his levels speak volumes about the man. He came here from an island with nothing: a skinny boy with many bad habits who liked to run at defenders. Now he is a complete player: a beast. We use him as an example in every room here: from the gymnasium, to the psychology classrooms and the dressing rooms. He sacrificed himself to get everything he has now.”

The first Ballon d’Or winner to come through the Sporting youth system, Luis Figo was recognised as arguably the finest footballer in Portugal’s history prior to the emergence of the aforementioned Ronaldo.

The street-kid from a working-class suburb of the capital would flourish following his nurturing in the Sporting set-up, making his debut as a 17-year-old and making an instant impression, earning senior international recognition just a year later.

Figo was a sublimely talented footballer, providing effortless creativity and delighting the Sporting fans with a series of trademark feints, step-overs and daring dribbles.

He moved to Barcelona in the mid-nineties as a replacement for the great Michael Laudrup and enjoyed a multitude of success under the guidance of Johan Cruyff, winning two La Liga titles and a series of cup successes.

Figo’s career, somewhat regrettably, will forever be synonymous with his crossing of Spains greatest rivalry, leaving Barcelona for Real Madrid in a world-record transfer in 2000, the year he was crowned as just Portugal’s second Ballon d’Or winner after Eusebio.

His move to the Bernabeu proved vindicated, however, as he helped Los Blancos to two league titles and the Champions League, before winning four consecutive Serie A titles in the latter stages of his career at Inter Milan.

Ricardo Quaresma is another wide talent whose mercurial talents were allowed to flourish at Sporting, though his career has been perhaps been one of unfulfilled potential for a player possessing sensational natural ability.

Quaresma broke into the Sporting first-team shortly after the turn of the millennium and made a huge impression on the capital club, playing a key role in a domestic double winning campaign under the guidance of head coach Ladislau Bölöni.

The winger, blessed with lightning pace and majestic trickery, was widely acknowledged as being more naturally gifted than the aforementioned Ronaldo, with the two stars – born just 18 months apart – carrying a huge weight of expectation on their shoulders.

Quaresma and Ronaldo – possessing similar skill sets and troubled upbringings – formed a close bond, but hopes of the two dovetailing at the summit of European football failed to come to fruition as the former struggled following a move to Barcelona as a teenager.

Returning to Portuguese football just a year later at Porto, Quaresma enjoyed the best period of his career and won a further three Primeira Liga titles, though later enjoyed all too brief stints at the likes of Inter Milan and Chelsea.

His career may not have reached the heights once predicted but Quaresma remains a firm favourite of the footballing hipster, an outrageously gifted showman and the master of the Trivela.

Premier League fans will be familiar with the talents of Joao Moutinho, the midfielder having starred over the course of the past couple of seasons as part of the Portuguese contingent at Wolves.

The playmaker, however, has long been one of the classiest performers in European football having honed his talents in the set-up of the Sporting Lisbon academy.

Moutinho began his journey in the club’s youth system as a 13-year-old, quickly progressing through the ranks before making his first-team debut as a teenager and helping the side to the final of the UEFA Cup in his debut season.

The midfielder’s first full season saw him play every single minute of the club’s league campaign as he established himself as a key component in the Sporting side, later becoming the second youngest captain in the club’s history behind inaugural captain and founder Francisco Stromp.

Moutinho won two Portuguese Cups with Sporting before souring his relationship with the club following a move to rivals Porto, where he enhanced his reputation as one of Portugal’s finest talents, winning three league titles.

Dictating the play with a fine passing range from a deep-lying midfield role, Moutinho won another league title in France after a big-money move to Monaco and starred as Portugal won the European Championships in 2016, his 121 international caps behind only Cristiano Ronaldo and Luis Figo.

Another fleet-footed winger to star for Sporting before moving to one of European football’s giants, Nani graduated from the club’s academy system and soon caused great excitement amongst the Lisbon side’s supporters, drawing comparisons to former wide favourites in Ronaldo, Quaresma and Simao Sabrosa.

Nani’s ability to beat opposition full-backs soon gained admiring glances from the continent, with the youngster following in the footsteps of compatriot Ronaldo in heading to Manchester United in 2007.

The Portuguese international spent eight years at Old Trafford and produced a series of memorable moments, scoring a host of sensational individual efforts and winning four league titles and the Champions League amongst his major honours.

Named as the club’s Player of the Season and in the PFA Team of the Year during the Red Devils’ title-winning campaign of 2010/11, Nani often mixed sublime moments with inconsistency.

After leaving United he has enjoyed a nomadic career taking in spells at the likes of Fenerbahce, Valencia, Lazio and a return to Sporting, the 112-cap international currently enjoying a stint in MLS with Orlando City.