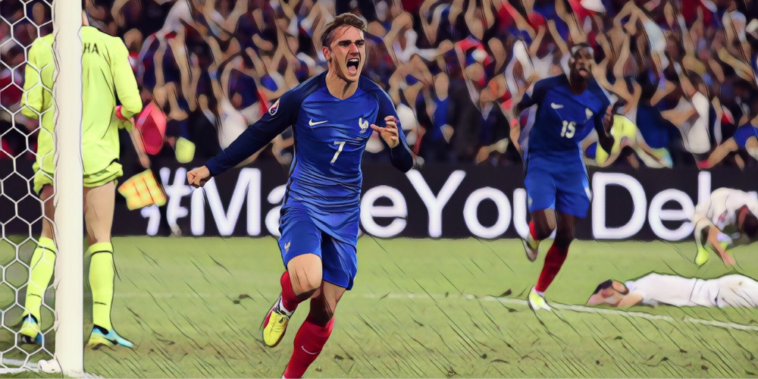 The European Championship is just around the corner as the continent’s best compete in the quadrennial showcase, with holders Portugal hoping to retain the title after success against France five years ago.

Over the course of this summer’s rescheduled tournament, we’ve looked back at past editions, remembering some of the best players and performances from previous European Championship finals.

Our latest look back revisits the 2016 tournament as the Portuguese claimed a first-ever major tournament success, defeating the hosts after extra time in the final.

Elsewhere Wales made a huge impression to reach the semi-finals, whilst England suffered an embarrassing exit after crashing out to tournament debutants Iceland in the last 16.

Here are five of the best players from Euro 2016.

Antoine Griezmann was named as the Player of the Tournament after spearheading the host nation’s run to the final, the forward scoring six times to win the Golden Boot award.

Griezmann scored a vital winner against Albania in the group stage before exploding in the knockout rounds, netting twice in a 2-1 comeback win against Ireland in the last 16 before netting once more as Iceland were beaten in the quarter-finals.

He starred once more to net twice as Germany were beaten in the semi-finals, though was unable to inspire Les Bleus to final success as the French failed to find a way through the Portuguese resistance.

Griezmann, however, proved himself as one of the world’s finest forwards and was the inspiration behind France’s pursuit of the trophy, a tournament which laid the foundations for their World Cup triumph in Russia two years later.

Cristiano Ronaldo has had better moments, performances and tournaments than Euro 2016, but there can be no overlooking his influence on Portugal’s maiden triumph at a major competition.

Captaining the side, he helped the Selecao through a testing initial group phase, drawing all three fixtures to sneak through to the latter stages as one of the best third-place finishers.

Ronaldo scored twice – including one stunning back-heeled effort – in a thrilling 3-3 draw with Hungary that secured Portugal’s passage to the last 16, before rising high to plant a towering header beyond Wayne Hennessey as Wales were beaten in the semi-finals.

⏪ Rewind to his incredible finish against Hungary at EURO 2016!

Ronaldo was denied the moment he craved as he was substituted through injury in the showpiece, though reemerged on the touchline to will his side on to an extra-time triumph over France.

He finished the tournament with three goals and three assists from seven fixtures played, ending Euro 2016 as the first captain to lift major silverware for Portugal.

Wales entered Euro 2016 as rank underdogs in the nation’s first major tournament appearance since 1958, though upset the odds to reach the semi-finals in a fairytale venture in France.

Key to their success was the presence of the then most expensive footballer in history, Gareth Bale having twice won the Champions League with Real Madrid before taking to a major international tournament with Wales.

Bale was brilliant and scored in all three of Wales’ group stage games, Chris Coleman’s side finishing top of a group that including rivals England, with their leading name the architect of their success.

He joined Michel Platini and Thomas Hassler as the only players to score from multiple free-kicks at a European Championship, whilst he embodied everything that was good about Wales with his willingness to work tirelessly in addition to providing moments of attacking quality.

Bale’s ability to break forward with electric pace was the key weapon in Wales’ armoury as The Dragons beat Northern Ireland and Belgium in the knockout rounds before bowing out to eventual champions Portugal.

Arguably the best defender at the tournament alongside the likes of Leonardo Bonucci and Jerome Boateng, the veteran was a pillar of defensive strength in the latter stages as Portugal contained some of Europe’s finest to emerge victorious.

Pepe had learned more than his fair share of trade tricks during a career of huge success at Real Madrid and used every ounce of his experience to marshal the Portuguese backline.

The centre-back was solid as Portugal eliminated surprise package Wales in the last four, before dominating against the French favourites in the final as Fernando Santos’ side frustrated the hosts to edge a narrow win.

So often the pantomime villain, he was the toast of his nation post-tournament after playing a key role in crowning Portugal champions of Europe.

Dimitri Payet entered the tournament off the back of a sensational debut campaign in the Premier League, the midfielder making an instant impact after signing for West Ham.

Payet was simply brilliant throughout the Premier League season and continued that form into the European Championship, scoring a stunning 89th-minute winner as France defeated Romania in their opening group game.

The star repeated the trick with another late intervention to beat Albania in Les Bleus‘ next fixture and was arguably the leading light of the group stage, providing France with a creative outlet and producing several spectacular moments.

His influence waned across the latter stages as Griezmann took charge of France’s pursuit of glory, though his spectacular contributions in the early stages of the tournament earn him selection here over the likes of Toni Kroos and Mesut Ozil.