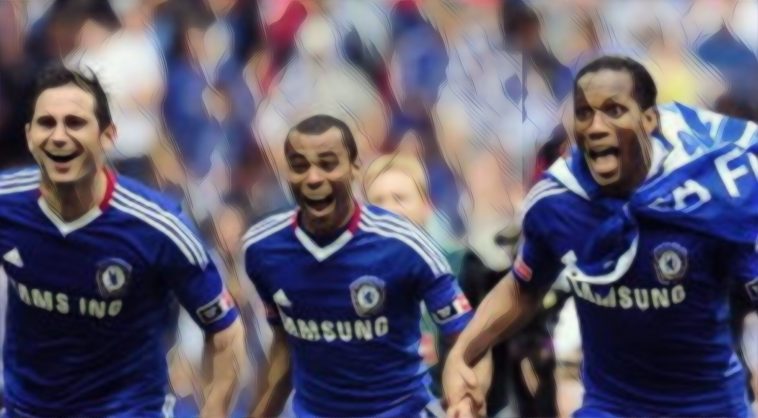 The past ten years have been a decade of great success for Chelsea, bringing the Premier League title to Stamford Bridge on three occasions in addition to becoming the first London side ever to lift the Champions League.

A host of other cup successes would also follow, the Blues having played host to some fine talent throughout the course of the past decade, and as the year and with it the decade reaches an end we’ve decided to compile our dream XI.

The long serving goalkeeper played a key role in the club’s early successes of the decade, forming part of the spine of Carlo Ancelotti’s double-winning team in 2010 before helping the club to Champions League success.

Cech played a crucial role as the club were crowned champions of Europe for the first time, saving an Arjen Robben penalty in the final victory over Bayern Munich, in which he also made three stops in Chelsea’s shootout success.

No player in Premier League history has ever kept more clean sheets than the former Czech Republic international. League Cup, FA Cup and Europa League success came his way before a move to Arsenal in 2015, the veteran bringing an end to a stellar Chelsea career following the emergence of Thibaut Courtois.

A difficult selection, with Branislav Ivanovic pushing him incredibly closely for a place in our team, but we’ve opted for the inclusion of the club’s current captain, who has been a model of consistency since his unheralded arrival from Marseille in 2012.

The Spaniard has made over 350 appearances for the club and has won a host of major honours, including being part of two title-winning sides and twice lifting the Europa League.

Nicknamed ‘Dave’ by his Chelsea colleagues, Azpilicueta has filled a variety of roles across the back four including at left-back and in the centre of defence, but slots into his preferred right-back position here.

Another fairly unheralded signing, Cahill joined from Bolton Wanderers in January 2012 and within six months was crowned a Champions League winner.

That success would prove to be one of eight major honours Cahill won during his time at the club, whilst the respect he commanded saw the defender named as club captain following the departure of John Terry. A key figure for a succession of managers, Cahill earns his place at the heart of our dream defence.

The academy graduate who went on to become one of the greatest players in the club’s history, much of Terry’s success would come before the turn of the decade though he did add to his extensive collection of silverware in the years leading up to his retirement in 2018.

Three Premier League titles, two FA Cups and the Champions League would be added to his medal haul in that time, though he would miss out on the latter success in heartbreaking fashion after being suspended for the final victory over Bayern Munich.

An all-time great of the Premier League and Chelsea, the ‘Captain, Leader, Legend’ banner that still adorns Stamford Bridge in his honour is a testament to his success.

Best of the 2010’s: Each top six club’s player of the decade

Ashley Cole increased his record haul to six FA Cups with a further two over the past decade, while also lifting the Premier League, Champions League and Europa League during a period of much success in South West London.

His reputation as a big game player was once again evident with a stand-out performance as Chelsea were crowned European champions in 2012, nullifying the threat of former Blues star Arjen Robben before emphatically dispatching his penalty in the shoot-out victory.

Chelsea have yet to truly replace the former England defender since his departure in 2014, which perhaps says a lot about his influence in the side.

The finest player of his ilk in world football, Kante would be a likely inclusion in an overall Premier League Team of the Decade such has been his impact at first Leicester City and then Chelsea.

After helping the Foxes to an improbable title triumph he made the switch to Stamford Bridge, repeating the feat in his debut season and being crowned as the PFA Player’s Player of the Year.

The pocket-dynamo’s relentless ability to break up attacks and win possession has been well documented, earning a reputation as one of the finest box-to-box midfielders. A vital cog in the club’s recent successes, he remains a key figure for Frank Lampard’s side.

The best player ever to wear a Chelsea shirt? Certainly a contender. Lampard spent 13 seasons at Stamford Bridge, developing a reputation as one of the finest goalscoring midfielders in world football and winning an extensive collection of silverware.

The Premier League, Champions League, FA Cup and Europa League were all lifted during the past decade, whilst Lampard also eclipsed Bobby Tambling’s record to become the highest goalscorer in the club’s history. A memorable career in South West London was brought to an end in 2014, his legacy and place in this side firmly assured.

The Brazilian international has spent six seasons at Chelsea and gets into our team courtesy of his remarkable consistency, having excelled during some of the club’s leaner years in recent times.

A consistent threat down the flank, Willian has provided many moments of quality and played a key role in two title-winning teams. The 31-year-old has made over 300 appearances and scored over 50 goals since arriving from Anzhi Makhachkala in 2013, winning five major honours in the process.

Best of the 2010’s: The greatest goals of the decade

Chelsea’s best player during the past decade, the brilliant Belgian produced countless highlight reel moments during a seven-season stay at Stamford Bridge.

Arguably the club’s key player in two title-winning seasons, he was named the PFA Player of the Year and Football Writer’s Footballer of the Year in the first of those successes under the guidance of Jose Mourinho.

Blessed with electric dribbling skills and an ability to ghost past players, few wingers have danced through defences quite as easily as Hazard at his Premier League peak.

The winger left the club for Real Madrid in the summer, though not before a two-goal haul to help the club to Europa League success over Arsenal in May.

The menacing Diego Costa proved to be a defender’s nightmare during a memorable three-year spell at Chelsea, bulldozing his way through Premier League defences as the shithouse focal point of Jose Mourinho’s title-winning team of 2015. The forward again played a crucial role as Chelsea were crowned champions under Antonio Conte two years later.

Who else but the Ivorian to spearhead this side?

Drogba may have joined Chelsea way back in 2004, though arguably his most defining moments came after the turn of the last decade. An inspirational figure as Carlo Ancelotti’s side secured a domestic double, Drogba would finish as the Premier League’s top scorer that season in addition to netting the winning goal against Portsmouth in the FA Cup final.

Two years later he would prove the hero again as Chelsea secured Champions League success, scoring a late equaliser in the final against Bayern Munich before converting the winning penalty in the shoot-out victory. Another FA Cup final winner came that same year, before departing for the Chinese Super League.

Drogba returned to the club for a second, short spell, however, winning the Premier League title and League Cup in his final season as a Chelsea player before moving to MLS. The man for the big occasions, Drogba is the easiest inclusion in this Chelsea Team of the Decade.