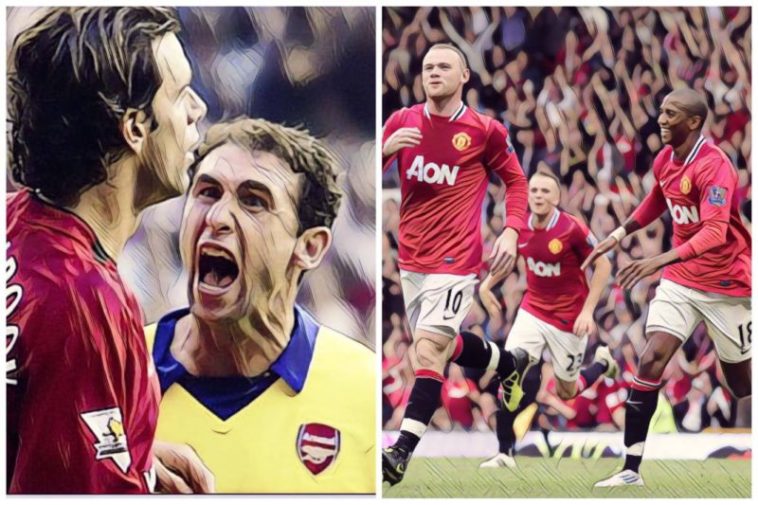 For many football fans of a certain age the game between Arsenal and Manchester United is the definitive Premier League fixture.

While both sides may have fallen some way from their glory days and the epic Wenger/Fergie rivalry these games still drum up plenty of interest.

So ahead of their latest clash at Old Trafford tomorrow, we’ve decided to take a look back at five classic encounters between the old foes…

It’s difficult to look beyond this one, David Beckham put Manchester United ahead from distance before Denis Bergkamp levelled the score. Deep in stoppage time, the Dutchman had the chance to win it for the Gunners from the spot but Peter Schmeichel saved his effort and when Ryan Giggs picked up Patrick Vieira’s misplaced pass, he set off on a run that would go down in history.

Arsenal made the trip to Old Trafford in May 2002 knowing that just a point against their bitter rivals would secure the Premier League title. In fact, Sylvain Wiltord’s 55th minute goal did more than that. It was a goal that won the title at their rivals ground, it ensured Arsenal had made it through the entire season without losing an away game and secured the London club’s second double in four years. Not a bad day’s work.

The following year Manchester United arrived at Highbury three points clear in the league, but Arsenal had a game in hand. A victory for the Gunners would give them the advantage and the momentum going in to the end of the season.

Ruud Van Nistelrooy gave the visitors a first-half lead, but a double from Thierry Henry seemed to have given Arsenal the win. The Gunners had barely finished celebrating when that man, Ryan Giggs, popped up again with a heartbreaking equaliser which secured the draw and helped the Red Devils regain the title by five points.

Just a few months later the rivalry between the two clubs was taken to a new level. This is probably the most iconic 0-0 draw in Premier League history. Eight yellow cards, a red for Arsenal Captain Patrick Vieira and a missed 91st-minute penalty from Van Nistelrooy that prompted Martin Keown to jump in front of and roar in to the face of the Dutch striker. Inches from defeat, Arsenal went on to finish the season unbeaten and win back the title from their northern nemeses.

Sorry Arsenal fans, probably best to look away now, we would 8-2 see you upset about this one.