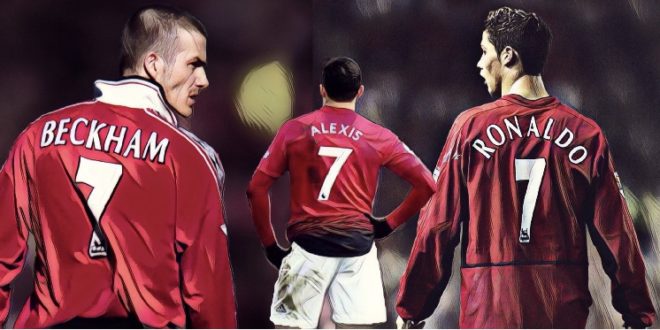 It’s arguably the most iconic shirt at one of world football’s biggest clubs, the number seven at Manchester United has a certain responsibility for its wearer.

Made iconic by the likes of George Best, Bryan Robson, and Eric Cantona, the fabled jersey has an air of mystique about it, meaning that any player handed it is immediately expected to be the Old Trafford outfits main attacking force.

However, in recent years players who’ve donned the famous shirt have underwhelmed to say the least and with current occupant, Alexis Sanchez headed for the Old Trafford exit door, we’ve decided to revisit and rank each of United’s number sevens of the Premier League era…

The man who many credit as the catalyst behind United’s dominance of English football, Sir Alex Ferguson’s signing of the French forward from fierce rivals Leeds proved one of the most inspired decisions of his illustrious career.

The story is told that Leeds, then champions of England, had enquired about Manchester United full-back Denis Irwin, only for their attempts to be rebuffed and Ferguson asked on Cantona’s availability.

To his surprise, Leeds were willing to allow the forward to leave and in November 1992 he made the switch to Old Trafford. Cantona would help transform what had up until then been a disappointing season for United, firing the club to a first league title in 26 years.

The charismatic and controversial Cantona may have been handed a nine-month ban for an attack on a Crystal Palace fan, though his contribution to United’s success can not be underestimated.

Over the next four seasons, he would help the club to three more league titles and two FA Cups, winning the PFA Player’s Player of the Year and FWA Footballer of the Year awards during that time.

He would leave the club in 1997, later being voted as the Premier League’s Overseas Player of the Decade.

Perhaps the first footballer to truly cross into the world of celebrity, Beckham became a superstar during his time at Old Trafford.

Handed the number seven shirt following Cantona’s departure, Beckham’s pin-point delivery and repertoire of free-kicks established him as one of the best creative talents in world football.

In eight seasons as a first-team regular, Beckham would win six Premier League titles, including being part of the famed treble-winning side of 1999.

He would lead the Premier League for assists in three seasons out of four between 1998 and 2001, whilst also finishing as runner-up for both the Ballon d’Or and FIFA World Player of the Year (twice) awards during that time.

Real Madrid would come calling in the summer of 2003, making the former England captain their latest galactico after 85 goals in 394 United appearances.

Beckham’s departure for Spain saw Sir Alex Ferguson place his trust in an untested 18-year-old, signed from Sporting Lisbon and encouraged by the Scot to take the iconic seven shirt.

That teenager was Cristiano Ronaldo, who over the next seven seasons would develop from a tricky talent with a tendency to ‘showboat’ into arguably the world’s best player.

Striking up a formidable partnership with fellow young talent Wayne Rooney, the duo would fire United to three consecutive league titles between 2007 and 2009, with Ronaldo twice winning PFA Player’s Player of the Year and FWA Footballer of the Year double.

His finest season came in 2007/08, Ronaldo hitting 42 goals in all competitions to fire United to a Champions League and Premier League double, winning his first Ballon d’Or in the process.

After six seasons Real Madrid inevitably came calling, signing the Portuguese superstar in a world-record £80m deal, Ronaldo cementing himself as an all-time great during his time in Spain.

Sir Alex Ferguson pounced for the free signing Owen in 2009, the United boss capitalising on Newcastle’s relegation to secure the services of the England forward.

Owen had been regarded amongst the world’s finest finishers during his spells at arch-rivals Liverpool and Real Madrid, winning the Ballon d’Or in 2001, but injuries had hampered his progress and his best days were behind him.

Despite this, Ferguson believed Owen would make a valuable addition to his squad, offering experience and quality around the penalty area that could prove important following the loss of Ronaldo.

In three seasons Owen would never establish himself as a fixture in Ferguson’s side, though a derby winner in the sixth minute of stoppage time against Manchester City endeared him to the club’s support.

He’d win an elusive Premier League title in 2011, before leaving for Stoke after scoring 17 goals in 52 appearances for the club.

Signed in the summer of 2009, Valencia initially wore the number 25 at Old Trafford following his arrival from Wigan Athletic.

The Ecuador international had impressed at the Lancashire side, with the hope he could bring pace and power to the flanks at United.

Valencia was handed the prestigious shirt after being named as the club’s Player of the Year in 2011/12, inheriting the shirt from Owen as a reward for his performances.

Following a dip in his performances, Valencia decided to vacate the shirt in 2013, wearing it for the final time against Sevilla and reverting back to number 25.

Valencia would give United a decade of service before departing in 2019, even being named as club captain. We’ve ranked Valencia as a whole during his time at the club, though his best displays were in the number 25.

The marquee signing to bring in the Louis van Gaal reign at Old Trafford, United decided to smash the British transfer-record to sign Argentine winger Di Maria for £59.7m from Real Madrid in 2014.

Di Maria has just helped the Spanish giants to Champions League success, and his arrival was keenly anticipated by the United faithful.

Handed the iconic seven shirt, hopes were high that the winger could help transform United’s fortunes following their struggles since the retirement of Sir Alex Ferguson.

Di Maria started brightly in the Premier League, starring in the opening weeks of the new season but his form soon drastically dipped.

A break-in at the player’s home is said to have unsettled the player, whilst his form on the pitch deteriorated as he sought a move away. After just one season at the club he requested to leave, joining Paris Saint-Germain in the summer of2015.

The Dutch winger arrived with a burgeoning reputation after helping PSV Eindhoven to the Eredivisie title in 2015, finishing as the division’s top scorer with 22 goals.

His performances prompted United to splash £25m on the emerging talent, beating the likes of Arsenal and Liverpool to his signature, but after showing promise by scoring his first two goals for the club against Club Brugge, he soon began to struggle.

He would score just two Premier League goals in his first season at the club, before falling out of favour following the arrival of Jose Mourinho as manager.

Just four league appearances followed after the Portuguese manager’s appointment, before Depay was sold to French side Lyon for an initial £16m in January 2017.

A hugely anticipated arrival, United secured the signing of the Chile forward in a straight swap for the under-performing Henrikh Mkhitaryan as the forward’s contract ran down at the Emirates.

Sanchez had been amongst the Premier League’s finest players during his spell in North London, scoring 60 goals in 122 appearances following a big-money move from Barcelona.

United had beaten rivals City to his signature, offering Sanchez a Premier League record contract worth a reported £500,000-a-week. The move has proven nothing short of a disaster, Sanchez scoring just three league goals since joining the club in January 2018 and looking a shadow of the player he was at Arsenal.

Injuries and inconsistency have hampered his progress, though he has never rediscovered his previous form and his unhappy spell at the club looks set to end.