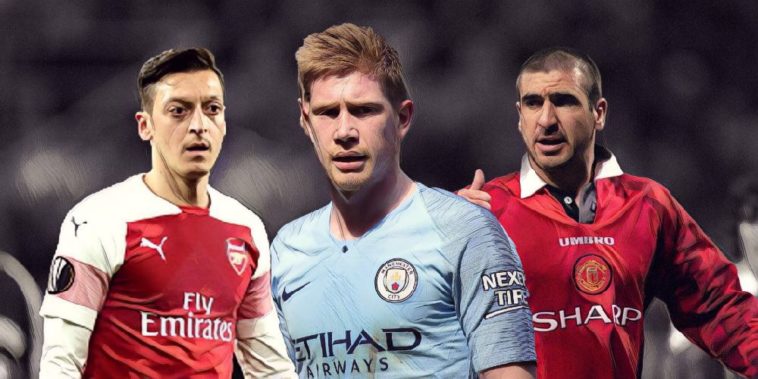 Kevin De Bruyne registered his 50th Premier League assist for Manchester City last weekend, the Belgian international having been a prolific creator since his arrival at the Etihad in 2015.

The 28-year-old is widely regarded as one of the best creative talents of modern times, but where does he rank amongst the best in Premier League history?

Here are the five fastest players to have reached 50 Premier League assists:

Only Manchester United legend Ryan Giggs sits above the Spaniard in the Premier League’s all-time assists table, Fabregas having created 111 goals in 350 appearances during spells at both Arsenal and Chelsea.

His ratio of 0.32 assists per game is the highest of any player in the top 10, whilst he is also the fifth fastest in history to reach the 50 landmark.

Having emerged as a teenager under Arsene Wenger at Arsenal, the midfielder took just 165 games to reach the landmark of 50 Premier League assists.

The Arsenal legend is widely regarded as one of the Premier League’s all-time greats, having been part of three title-winning sides under Arsene Wenger.

Bergkamp sits fifth in the list of all-time assist providers, though only three players reached 50 faster than the ‘Non-flying Dutchman’.

A scorer and provider in equal measure, the forward reached the 50 landmark in 146 games, with no player registering more assists than Bergkamp during the 1998/99 season.

15 of the best quotes by Dutch Master Dennis Bergkamp

Few players have been as influential in Premier League history as the French forward, who proved the catalyst behind Manchester United’s dominance of English football.

Having arrived from rivals Leeds in 1992, Cantona inspired United to a first league title in 26 years and twice finished as the highest assist provider in the division during a trophy-laden Old Trafford career.

It took Cantona just 143 games to reach 50 Premier League assists, a record that would not be broken until 2018…

15 of Eric ‘The King’ Cantona’s best ever quotes

For all of his critics in recent times, there can be no doubt that Ozil at his best is one of the elite creative forces in English football. His detractors may point to his inability to influence the biggest contests, though his record marks him out as the second most prolific creator in Premier League history.

The German took 141 games to reach the 50 landmark, teeing up Shkodran Mustafi against Watford in March 2018 to break Cantona’s long-standing record.

His finest season came in 2015/16, where his 19 assists came just one short of equalling Thierry Henry’s record for most in a single campaign.

The City midfielder possesses vision and a passing range that few can match, and having racked up four assists in the opening three weekends of the new Premier League season, he looks likely to continue to climb the all-time list.

De Bruyne is currently 26 assists behind former Tottenham and Manchester United forward Teddy Sheringham in 10th place, though he has some way to go to eclipse Ryan Giggs’ record total of 162.