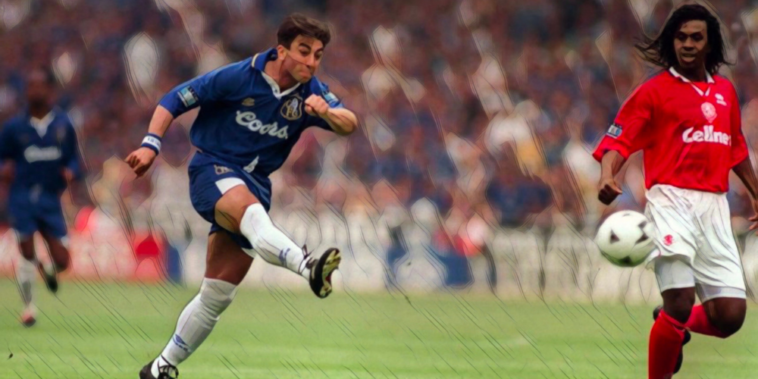 The FA Cup is football’s oldest national football competition and the final remains one of the most eagerly anticipated dates on the English calendar.

Chelsea and Liverpool will go head-to-head for the trophy at Wembley this weekend, with the players from each side possessing a chance to write their names into the competition’s unique and storied history.

Ahead of Saturday’s showpiece we’ve decided to look back at some of the most memorable FA Cup final goals of all time.

The 1981 final was forced into a replay after a 1-1 draw between Tottenham and Manchester City, with the sides meeting once again five days later at Wembley.

The Argentine picked up the ball some 40 yards from goal and with a succession of blue-shirted opponents ahead of him. Taking matters into his own hands, Villa surged forward at the City backline before jinking into the penalty box, feinting past one challenge, and another, before firing a low effort past Joe Corrigan.

#OnThisDay in the 1981 #FACup Final replay, Ricky Villa did 𝐓𝐇𝐈𝐒 for @SpursOfficial 🤩 pic.twitter.com/3Gz3B1HFFX

An evenly-matched final had needed something special to decide it and Villa provided the moment which wrote his name into FA Cup folklore.

Stuart Pearce had a reputation for thumping strikes of a football and in the 1991 FA Cup final thundered Nottingham Forest into the lead.

The free-kick had been awarded after an infamous foul from Paul Gascoigne, with the Tottenham midfielder stretchered from the field after injuring himself whilst launching into a wild challenge on Gary Charles.

Pearce made matters worse for Gascoigne and Spurs, blasting home the resulting free-kick with a ferocious strike.

Spurs, however, fought back to win the trophy in extra-time as Paul Stewart’s equaliser and Des Walker’s own-goal saw the North Londoners become the first club to win the FA Cup on eight occasions.

Ruud Gullit’s pre-game talk likely centred around starting the 1997 FA Cup final well, but even the Chelsea manager will not have envisaged just what a start his side would make.

It took just 42 seconds for Roberto Di Matteo to open the scoring in spectacular style at Wembley, driving from inside his own half before lashing a fierce effort in off the underside of the crossbar.

Di Matteo’s drive was the fastest goal scored in an FA Cup final at Wembley – a record since broken by Louis Saha in Everton’s 2-1 defeat to Chelsea in 2009.

What. A. Hit. #OnThisDay in 1997, Roberto Di Matteo started the Final with a 𝗯𝗮𝗻𝗴 💥#EmiratesFACup @ChelseaFC pic.twitter.com/Rx2mPlsG0r

The Italian’s goal set Chelsea on their way to a 2-0 win and a first major trophy in 27 years, whilst the midfielder repeated the trick with the only goal of the game in the 2000 final win over Aston Villa.

Ray Parlour didn’t score many goals for Arsenal and he certainly didn’t net many better than his opener in the club’s 2002 FA Cup final win over Chelsea.

The words of Tim Lovejoy are now forever associated with Parlour’s peach in Cardiff, as the TV presenter and Chelsea fan dismissively muttered a sentence he regretted just seconds later.

Working in a comedic commentary role alongside Arsenal-supporting Bradley Walsh, Lovejoy’s words came back to haunt him in spectacular fashion as Parlour burst forward to bend an unstoppable finish into the top corner.

A pearler from Parlour, #OnThisDay 💥

Freddie Ljungberg scored an equally impressive goal in a 2-0 win as Arsenal bounced back from defeat in the previous season’s final to seal part one of a domestic double under Arsene Wenger.

Steven Gerrard often carried a weight of expectation at Liverpool and the 2006 FA Cup final was perhaps the performance that saw the midfielder turn full ‘Roy of the Rovers’.

The Reds were favourites against a spirited West Ham side but found themselves two goals down inside the opening half an hour in Cardiff, a Jamie Carragher own goal and Dean Ashton’s strike putting the Hammers on course for an upset.

Gerrard dragged Liverpool back into the contest, first picking out Djibril Cissé to pull a goal back before lashing home an equaliser from Peter Crouch’s knockdown.

An entertaining final swung back in West Ham’s favour as Paul Konchesky’s cross deceived Pepe Reina, only for Gerrard to add one stunning last twist in the tale.

As the designated period of stoppage time was announced to the Millennium Stadium, Gerrard unleashed a thunderbolt to blast a loose ball beyond Shaka Hislop and force extra time.

Liverpool won a thrilling final on penalties and Gerrard’s place in the competition’s history was assured. Even by the standards he set, it’s difficult to imagine he’s ever hit a football sweeter.