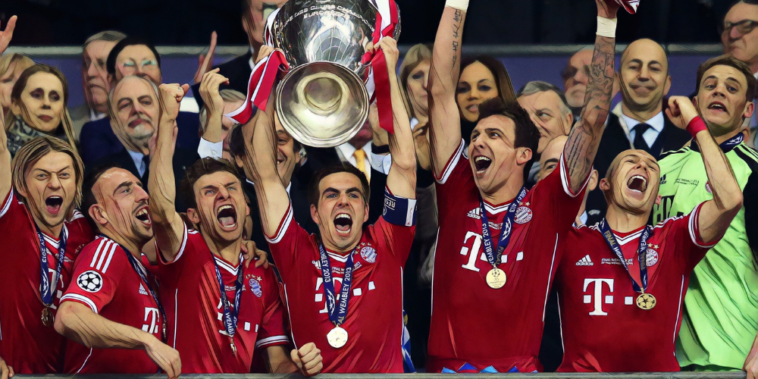 Bayern Munich rank amongst the elite clubs in world football and have a rich and storied history in continental competition, the German giants having been crowned champions of Europe on six occasions.

The fifth of those triumphs came following the first ever all-Bundesliga Champions League final, as Bayern scored a late winner to defeat rivals Borussia Dortmund at Wembley.

Jupp Heynckes’ side were in pursuit of a treble, having fallen at the final hurdle the previous season, finishing as runners-up to Dortmund in league and cup and to Chelsea in the Champions League.

Bayern’s victory exorcised the demons of the Champions League final defeat at their own Allianz Arena a year earlier, having conceded a dramatic late equaliser to Chelsea, who survived a missed Arjen Robben penalty in extra-time before winning via a shoot-out.

We take a look back at the Bayern XI who earned Champions League redemption at Wembley in 2013.

The greatest goalkeeper of his generation and one of the very finest to have adorned the gloves, Manuel Neuer has spent a decade at Bayern and picked up silverware with incredible regularity.

Neuer was in his second season as number one and made 50 appearances in all competitions during that campaign, part of 434 he has made since crossing to Bavaria from Schalke.

Dortmund started the final the better side with Neuer called into action on several occasions, making a succession of saves including a fine stop to deny Jakub Błaszczykowski.

His presence was – and remains – crucial to Bayern, as the German giants picked up club football’s most prestigious honour.

Phillip Lahm was the perfect example of professionalism and German efficiency, a footballer who won almost everything and was a genuine world-class talent in multiple roles.

Either at full-back or in midfield the World Cup winner rarely disappointed, enjoying a lengthy career at Bayern and captaining the side to their 2013 Champions League success against Dortmund.

Lahm spent the entirety of his career – a two-season loan at Stuttgart aside – as a Bayern player, winning eight Bundesliga titles amongst 21 trophies accumulated.

Another stalwart of the modern Bayern, Jerome Boateng side for the German giants in 2011 following a brief and unsuccessful Premier League spell at Manchester City.

Boateng has since been a fixture in the side and has won two continental trebles with Bayern, forming part of the side that conquered Europe in 2012/13, before repeating the feat in 2019/20.

Boateng has enjoyed some fine moments at Bayern, though the then 25-year-old struggled during the opening exchanges of the 2013 final as Dortmund threatened to run riot and was fortunate he had Neuer to bail him out on occasion.

Dante, like centre-back partner Boateng, struggled to live with Dortmund’s effervescent attack during the first half and was booked for a foul on Marco Reus, before conceding a penalty following a clumsy challenge on the same player in the second half.

Ilkay Gundogan stroked home the spot-kick to equalise for Dortmund, though Bayern snatched a late winner as Dante’s first season since arriving from Borussia Monchengladbach ended in treble success.

The Brazilian spent three seasons with the club and won consecutive Bundesliga titles before signing for Wolfsburg.

Impressed at both ends of the pitch during the final with a 20-year-old Alaba underlining his status as one of the world’s best young defenders, with the Austrian having since spent the entirety of his career to date with Bayern.

Bayern’s 2012/13 treble success saw Alaba win the second of a staggering 10 Bundesliga titles he has won, alongside the first of two Champions League winners’ medals.

A world-class talent in either the backline or midfield, his summer departure to Real Madrid on a free transfer is a huge blow to the German champions.

Bayern Munich smashed the Bundesliga transfer record to sign Martinez in a €40m deal ahead of the 2012/13 season, with his debut campaign ending in dream fashion as the club were crowned champions of Europe.

Martinez made 43 appearances in all competitions and starred during the semi-final win over Barcelona, helping Bayern dominate in midfield against international teammates Andres Iniesta and Xavi.

Schweinsteiger’s final was almost over before it started after an injury in the warm-up, though the midfielder took his place in the side and helped snuff out danger as Dortmund pushed forward in the first half.

The Germany international drove Bayern on in the second period to claim a Champions League winners’ medal, having been on the losing side during the club’s defeats in 2010 and 2012.

Schweinsteiger ranks as one of the most influential players in Bayern’s modern history, winning eight league titles during a glittering career that delivered 500 appearances for the club, whilst he was named as Germany’s Footballer of the Year during their 2012/13 treble season.

Arjen Robben’s late goal saw Bayern score a dramatic winner to win the Champions League, the ultimate redemption for the winger whose missed penalty had proven so costly in defeat to former club Chelsea the previous season.

Robben was arguably the best player afield and provided the assist for Bayern’s opener before waltzing through the Dortmund defence to score the winner, sparking jubilant celebrations from the Munich contingent at Wembley.

Robben’s match-winning moment was perhaps the highlight of a career where his best moments came in Germany, spending a decade at the Allianz Arena to become an iconic figure in Bayern’s history.

One of the leading lights of Bayern’s march towards silverware success, Franck Ribery was named as UEFA Men’s Player of the Year following the 2012/13 season and found himself on the Ballon d’Or podium behind only Cristiano Ronaldo and Lionel Messi.

The winger – who provided 24 goal involvements in 24 league starts that season – struggled to truly make his mark on the final, though it was Ribery’s clever pass that lead to Bayern’s opening goal.

Ribery spent 12 seasons providing the Bayern side with French flair, forming a devastating double-act with fellow winger Robben as the Bundesliga behemoth won trophy after trophy.

Thomas Muller has made a habit of turning up on the biggest occasions, but was surprisingly subdued despite Bayern’s success in their all-German clash with Dortmund at Wembley.

Muller had thought he’d won the Champions League for Bayern after scoring seven minutes from time against Chelsea in the previous season’s showpiece, but got his hands on a winners’ medal the following season.

Muller came through the academy system at Bayern to become of the best and most unique German players of a generation, scoring 214 goals in 518 appearances to date and winning 28 trophies in total.

Mandzukic spent just two seasons with the club and scored 48 goals in just 88 appearances before signing for Atletico Madrid, later making a unique piece of history after scoring in Juventus’ champions League final defeat to Barcelona in 2015.

The forward became just the third player to score in a European Cup/Champions League final for two different clubs, with Cristiano Ronaldo (2008 with Manchester United, 2014 and 2017 with Real Madrid) and Velibor Vasovic (1966 with Partizan, 1969 with Ajax) the only other players to have achieved the feat.