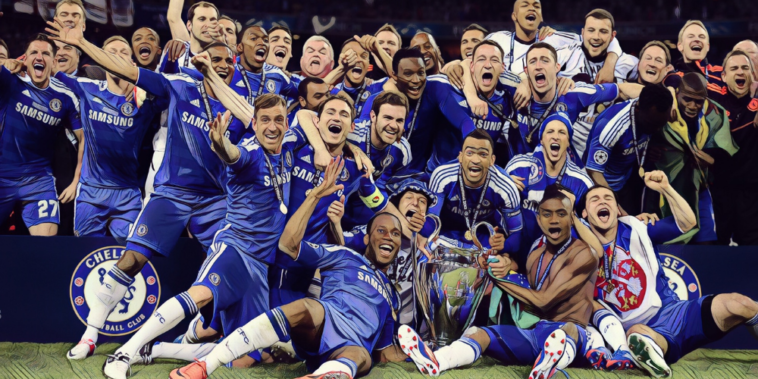 Chelsea face Manchester City in the final of the Champions League on May 29, the west Londoners into their third showpiece and first since becoming London’s first European champions in 2012.

Chelsea have enjoyed a fine record in the Champions League since their transformative takeover, with no Premier League side having ever reached the semi-finals on more occasions.

Despite emerging as regular contenders in the latter stages since the turn of the century, their 2012 triumph came as a shock result as an understrength side upset the behemoth of Bayern Munich in their own backyard.

Thomas Muller’s 83rd-minute goal looked to have won it for the Germans, only for Chelsea to snatch a late equaliser through Didier Drogba to force extra-time and then penalties.

Chelsea’s success was all the more impressive given the absence of four players through suspension, including influential club captain John Terry.

Here is a look back at the Chelsea side that were crowned European champions in 2011/12.

Didier Drogba’s heroics took most of the headlines in Munich, but there were few more influential performances than that of Petr Cech who had one of his finest games in a Chelsea shirt on the big occasion.

Undisputedly one of the great players of the club’s modern history, Cech was a pivotal figure in the final, making a string of saves including saving a penalty from former Chelsea winger Arjen Robben in extra-time to keep the scores level.

The former Czech Republic international then remarkably guessed the right way on every Bayern penalty in the ensuing shoot-out, saving from Ivica Olic and Bastian Schweinsteiger to help crown Chelsea Champions League winners.

Jose Bosingwa spent four seasons with Chelsea and capped his final campaign with Champions League success, starting the final at right-back given the suspension of Branislav Ivanovic.

The former Portugal international made 125 appearances for the west Londoners in all competitions, though left following their 2012 triumph to sign for Queens Park Rangers and suffered the ignominy of Premier League relegation just a year after collecting a Champions League winners’ medal.

In the absence of John Terry it was left to David Luiz to lead the Chelsea backline against Bayern, with the Brazilian defender having often mixed the sublime and the ridiculous throughout his career.

Fortunately for the Blues this was one of the defender’s more impressive showings in a smash-and-grab Champions League final win, their success built on disciplined and organised defending with Luiz at the heart of their triumph.

Luiz spent two spells at Chelsea either side of a stint at Paris Saint-Germain, winning six major honours during his time at Stamford Bridge.

Gary Cahill swapped an ultimately unsuccessful relegation battle with Bolton for the bright lights of the Champions League stage mid-way through the 2011/12 campaign, the winter window signing thrust into club football’s biggest occasion against Bayern.

Cahill stood strong in the face of relentless pressure from the Germans alongside Luiz, in a performance which typified his contribution to the Chelsea cause as the centre-back became one of the club’s most decorated players before leaving for Crystal Palace in 2019.

No stranger to a fine performance when it matters most, Ashley Cole was a stand-out performer as Chelsea overcame the odds to beat Bayern, the left-back up against the impressive Arjen Robben throughout.

Cole was unable to get forward as he would have hoped but stuck to his defensive task impressively, making a number of vital blocks in the second half and stepping up to convert his penalty in the shoot-out.

Arguably the best left-back of his generation and a player who rarely disappointed amid the pressure of the biggest occasions.

Mikel’s career with Chelsea included just six goals from 374 games over an 11-year spell and his final performance was another unlikely to be found on a highlight reel, safe and assured possession as he shielded the backline.

Frank Lampard captained the side in the absence of long-term teammate Terry, with the midfielder hoisting aloft the trophy alongside the suspended club captain as Chelsea exorcised their demons of final defeat to Manchester United in 2008.

The club’s Champions League success was amongst the highlights of a record-breaking career with the Blues, one which saw Lampard become Chelsea’s leading scorer of all time with 211 goals in all competitions.

Lampard’s silverware haul also three league titles and four FA Cups amongst his 11 major honours, his achievements seeing him regarded as one of the best English players of his generation and arguably Chelsea’s finest ever player.

Juan Mata’s peripheral role at Manchester United makes it easy to forget just how good the Spaniard was in his first two seasons with Chelsea, winning back-to-back club Player of the Season awards.

Mata was coming towards the end of an exceptional debut campaign as Chelsea won the Champions League, the summer signing’s wonderful delivery headed home by Didier Drogba for the Blues’ dramatic leveller.

His missed penalty in the shoot-out ultimately didn’t cost his side as Chelsea were crowned winners, before Mata raised his levels sensationally with 19 goals and 35 assists in a staggering 2012/13 campaign.

Jose Mourinho’s arrival as manager stifled his creativity and led to an untimely exit, but Mata’s best performances undoubtedly came in Chelsea colours.

Another player included in the absence of some notable names, Salomon Kalou was tasked with providing the industry missing given Ramires’ final suspension.

The Ivorian worked hard down the right channel to help deal with the threat of Franck Ribery, though it was not enough to earn the winger a new contract as he was released following the final win.

Kalou had been a valuable squad player during six seasons at Chelsea, scoring 60 goals in all competitions and winning seven major trophies. Now 35, he is the fourth-highest scoring player in his nation’s history, with 27 goals in 96 caps, and most recently played for Brazilian side Botafogo.

Incredibly thrust into Chelsea’s starting side for his Champions League debut, the more natural left-back occupied an advanced position in a bid to assist Cole in dealing with Robben down the Bayern right.

Bertrand came through the academy at Chelsea but failed to establish himself as a first-team regular, making just 28 league appearances before moving to Southampton, where he has become a fixture in the Saints’ side over seven seasons.

The now 30-year-old was named in the PFA Team of the Year during his debut season on the South Coast and has won 19 caps for England at senior level.

Has there ever been a player who revelled the biggest occasions more than Didier Drogba?

It was the Ivorian’s final moment in a Chelsea shirt before a second one-season spell two years later, Drogba regarded as arguably the club’s most influential player after a stunning career that included four league titles, 164 goals and an incredible goalscoring record in major finals.

Florent Malouda and Fernando Torres were the two players introduced from the bench during the final, the former perhaps unfortunate to see Ryan Bertrand included ahead of him given his contributions in recent campaigns.

Torres arrived as the most expensive player in British football history from Liverpool in 2011, though failed to replicate the performances he showed on Merseyside despite some fine moments, including a goal in the semi-final win over Barcelona that led to Gary Neville’s notorious goalgasm.