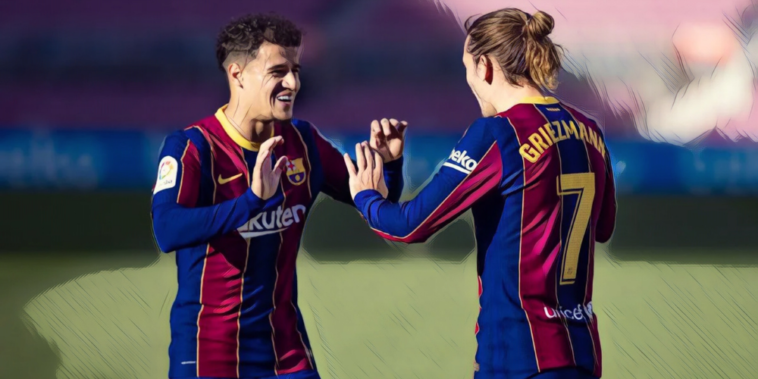 Barcelona’s concerning financial situation has led to huge uncertainty at the Camp Nou, with the club informed they are unable to register new signings amid their current predicament.

Names such as Sergio Aguero, Eric Garcia and Memphis Depay have been signed on free transfers, though none of that trio are able to begin their Barcelona career until costs have been cut as the Catalans seek to abide by La Liga’s rulings.

Perhaps more crucially, Barcelona’s salary-cap crisis means no new deal has yet been agreed with Lionel Messi, who as it stands is a free agent following the expiration of his deal earlier this month.

Having secured Copa America success with Argentina this summer, the six-time Ballon d’Or winner will want his future sorted as soon as possible and a fire-sale may ensue at Barcelona in a bid to both cut costs and raise necessary funds.

We’ve decided to look at five Barcelona players who Premier League clubs will be targeting this summer.

Perhaps the biggest name who could become available this summer, Griezmann is understood to be Barcelona’s highest-paid player following the expiration of Messi’s contract and the sale of the France international would go someway to reducing the club’s costs.

Griezmann signed for Barcelona in a €120m deal from Atletico Madrid in 2019 after five successful seasons in the Spanish capital, though has largely failed to replicate those performances since making the move to Catalonia.

The presence of Messi has left the 30-year-old without a clear and defined role, Griezmann having operated in a number of positions across the frontline, scoring 13 goals and providing seven assists in La Liga during the 2020/21 campaign.

Atletico Madrid has been mentioned as a potential destination with talks of swap deals involving the likes of Saul Niguez and Joao Felix, but Barca are wary of again strengthening a domestic rival, having seen Luis Suarez inspire Atleti to the league title last season after a cut-price move from the Camp Nou.

Chelsea has been mooted as a destination for Griezmann on a loan deal and the west London side are perhaps amongst the few major clubs capable of affording the Frenchman’s wages in the current climate.

Thomas Tuchel is keen to sign a new forward amid continued links to Erling Haaland and Griezmann could emerge as interesting alternative, even if the versatile star is not the genuine out-and-out number nine the Blues are seeking.

“Stay here and they will end up building a statue in your honour. Go somewhere else, to Barcelona, to Bayern Munich, to Real Madrid, and you will be just another player. Here you can be something more.”

Those are the words of Jurgen Klopp amid transfer talk surrounding a Liverpool exit for Philippe Coutinho, who after five impressive seasons on Merseyside earned his ‘dream’ move to Barcelona in a £142m deal.

The move has since proven a major disappointment and one of the large reasons for Barcelona’s crippling financial situation, Coutinho the most costly of a series of market mishaps in a questionable period of recruitment.

The Brazilian had looked the ideal player for the Spanish side during his time in the Premier League, but despite winning back-to-back league titles struggled to find a role following an initial bright start.

He spent the 2019/20 season on loan at Bayern Munich and won a historic treble, though it proved largely a peripheral role with the Bavarians opting not to trigger the option to sign him on a permanent basis.

Coutinho returned to the fold and featured under Ronald Koeman last season before being ruled out for the second half of the campaign with injury, but his future appears to be away from Barcelona and he has been linked with a return to English football.

Arsenal and Tottenham have been named as potential destinations for the 29-year-old, whilst a reunion with former Liverpool manager Brendan Rodgers at Leicester and a shock transfer to Everton have also been speculated.

Provided he can stay fit, Coutinho could be a more than useful addition to any of those sides, though both player and club will have to incur huge financial losses for any deal to materialise.

Martin Braithwaite has reportedly been told he can leave Barcelona this summer following the signings of Sergio Aguero and Memphis Depay, the forward having started just 11 league fixtures for the Spanish side last season.

Braithwaite was a surprise and emergency signing from Leganes in February 2020 and formed part of the Denmark side that reached the semi-finals of Euro 2020 this summer.

Whilst far from prolific, the 30-year-old is a versatile forward capable of operating across the frontline and has been linked with a quartet of Premier League clubs, with West Ham, Brighton, Burnley and Norwich City reportedly monitoring his situation.

Recent reports have suggested that Barcelona are seeking a fee in the region of €15m for the former Middlesbrough player.

One of the strangest financial deals Barcelona have completed in recent seasons, Miralem Pjanic arrived last summer in a big-money swap deal that saw Arthur Melo head in the opposite direction to Juventus.

The decision to send the 24-year-old Melo to Italy (€72m) and sign the then 30-year-old Pjanic (€60m) saw just €12m arrive at Barcelona and the Bosnia international most certainly represented a short-term gamble.

That Pjanic is a fine player and Melo largely flattered to deceive at Barcelona is besides the point, the gamble has backfired and the Catalan side now have an ageing and expensive asset who started just six league games last season.

Hindsight is a wonderful thing and perhaps few saw the meteoric rise of Pedri coming, but the teenager’s performances have now left Pjanic – one of the club’s highest earners – surplus to requirements.

New Tottenham sporting director Fabio Paratici is reportedly keen on a deal to take the Bosnian to north London, having previously operated at Juventus during Pjanic’s hugely successful four-year spell in Turin.

Pjanic is a fine passer and would add quality to the Spurs midfield should a deal be agreed, but Barcelona may have to once again accept a loan move to rid the 31-year-old from their wage bill.

Samuel Umtiti has become somewhat of a forgotten man at Barcelona having been stricken with injury problems across the past three seasons.

Umtiti formed part of the France side that won the World Cup in 2018, but has started just 29 league fixtures since Les Bleus’ triumph in Russia and could be allowed to leave for the right price this summer.

Still just 27-years-old, he has been previously been linked with the likes of Arsenal and Manchester United, whilst Tottenham could emerge as potential suitors with the north London side keen to strengthen at centre-back.

The signing of Eric Garcia, coupled with the presence of Clement Lenglet, Oscar Mingueza, Ronald Araujo and the experienced Gerard Pique, means chances are likely to be restricted for the Frenchman should he remain in Catalonia.

His injury record will be a major concern to prospective interested parties, but a cut-price deal could prove an eventual bargain if Umtiti can find his fitness on a consistent basis.