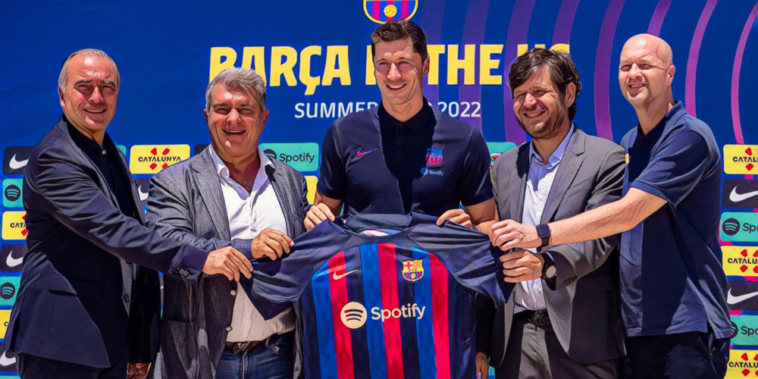 Barcelona are set to turn to a fourth ‘lever’ as the club desperately seek to raise funds and register their new signings ahead of the La Liga season.

La Liga have rejected an attempt from the Catalans to use the club’s own funds to inflate the value of asset sales, as the Spanish side have looked for ways to address their financial issues and strengthen the squad this summer.

Despite the concerning financial situation at the Camp Nou, Barcelona have been among the biggest spending clubs in Europe with their marquee arrivals including Robert Lewandowski, Raphinha and Jules Kounde.

According to the Guardian, Barcelona will now look to sell a further 25% of their content production company, Barça Studios, for an estimated figure of €100m. It is hoped that the additional income will allow the club to finally be able to register their new signings before the club’s first La Liga fixture against Rayo Vallecano this weekend.

Barcelona had accounted for €667m (£562m) brought in this summer as a result of the use of ‘economic levers’ to raise much-needed funds. The Spaniards have sold just under 25% of Barça Studios, alongside two packets of future television rights. Alongside a new sponsorship deal with Spotify, sales of first-team stars and increased revenue, Barcelona have accounted a total of around €850m as the club look to simultaneously strengthen and meet La Liga’s FFP regulations.

However, La Liga’s audit found the amounts received directly for the sale of television rights to Sixth Street accounted for just €517m. The remaining €150m has been paid by the club itself which, while legal, has not been deemed by La Liga as new income.

Barcelona set up a company called Locksley Investments and spent €150m of its own money to purchase television right from the 26th year, having agreed a deal with Sixth Street for the sale of two packages for the next 25 years. This allowed for the value of the television deal to be increased, though La Liga have rejected the interpretation of this as new funds.

Barcelona are still attempting to offload players in a bid to raise funds and had hoped the sale of Frenkie de Jong would prevent their ‘fourth economic lever’ from being activated. Manchester United agreed a fee for the midfielder earlier in the summer, while Chelsea are also interested in signing the 25-year-old.

Complications regarding unpaid wages to De Jong and a reported reluctance to be forced out have seen a deal stall however. Reports on Monday have also claimed that Barcelona are attempting to annul De Jong’s most recent contract with claims that it is illegal.

Pierre-Emerick Aubameyang – who has been linked with Chelsea – and Memphis Depay are among the other senior stars free to leave.

Barcelona are also negotiating salary reductions with several names, including Sergio Busquets, Jordi Alba and Gerard Pique, as the Catalans desperately look to make room in their salary cap and register the new arrivals.