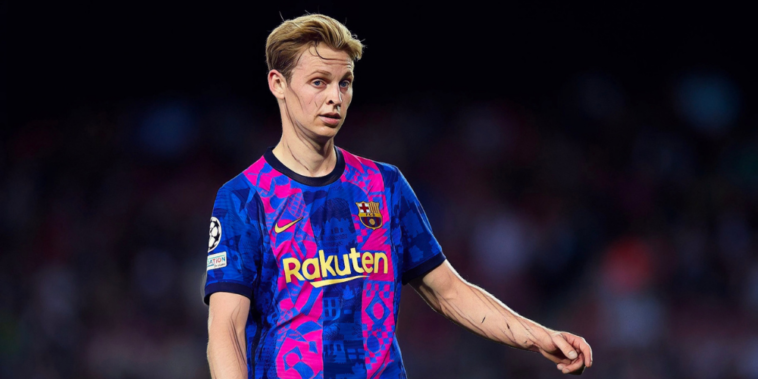 The saga surrounding Frenkie de Jong’s future has taken another twist with Barcelona hoping to ‘annul’ the midfielder’s current contract.

De Jong’s future has become the saga of the summer transfer window with Barcelona’s financial issues leading to a complicated and messy situation at the Camp Nou.

According to The Athletic, the latest twist involves Barcelona seeking to annul the midfielder’s existing contract and return to the deal he was previously on. The Catalans are alleging that the terms granted by the club’s previous board ‘involved criminality and provide grounds for legal action against those involved.’

Barcelona are understood to owe De Jong wages that were deferred in a bid to ease costs during the Covid-19 pandemic, but are attempting to reach an agreement with the Dutchman on those unpaid wages. However, there has so far been no compromise between the 25-year-old and the club.

Barcelona have reportedly wrote to De Jong and his representatives, claiming to have found evidence of criminal actions in relation to his contract renewal signed in October 2020.

De Jong signed a new two-year extension with the Catalans running until 2026, in which he accepted a reduced salary for the 2020/21 and 2021/22 campaigns, with the €18m loss to be redistributed across the following four campaigns.

However, Barcelona believe there is room to ‘initiate criminal proceedings’ against the former board and have informed De Jong of the alleged wrongdoing. The club have also told De Jong that he and his representatives may also be implicated, though the previous board have denied any wrongdoing over the deal. Barcelona have also informed De Jong of their intention to annul his current contract and return to the agreement signed after his arrival from Ajax in €75m.

The Spanish side are open to the potential sale of De Jong this summer and agreed a fee with Manchester United earlier in the transfer window, but the financial issues – alongside uncertainty surrounding the player’s interest in a move to Old Trafford – have since seen a deal stall.

Chelsea are also interested in a deal to sign De Jong and are prepared to meet Barcelona’s asking price and cover the midfielder’s unpaid wages, while the west Londoners have the attraction of Champions League football this season.