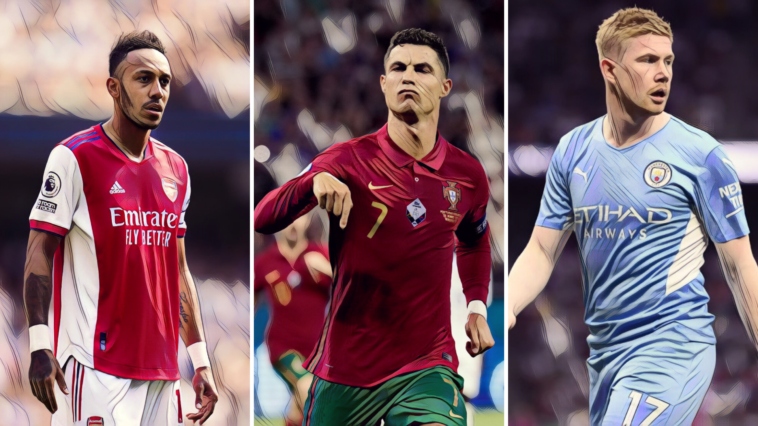 Cristiano Ronaldo is back in the Premier League after completing a romantic return to Manchester United, with the Red Devils securing a deal with Juventus for the five-time Ballon d’Or winner.

Ronaldo has signed a two-year deal with the option to extend by a further seasons, and becomes the highest-paid player in the Premier League.

Following the 36-year-old’s return to Old Trafford, we look at the Premier League’s biggest earners.

Pierre-Emerick Aubameyang’s signing of a new deal at Arsenal last September came as a huge relief to the Gunners, the club captain ending speculation over his future after putting pen to paper on a lucrative new deal.

Aubameyang had scored 54 league goals across his first two-and-a-half seasons at the Emirates, but his performances have dropped significantly since signing his contract extension.

The Gabon international struggled for form last season in a situation that echoed that of Mesut Ozil, another Arsenal player whose standards slipped after penning a record-breaking contract in north London.

De Gea had been a figure of class and consistency in a turbulent period for the Red Devils, winning the club’s Player of the Season accolade for four consecutive seasons between 2015 and 2018.

The 30-year-old has spent a decade with the club and remains first choice, though has seen a period of mixed form and the emergence of Dean Henderson threaten his undisputed status over the past two seasons.

Grealish’s record-breaking price-tag was followed by a huge long-term contract at the Etihad, reported to be worth £380,000-a-week including bonuses.

That figure makes the 25-year-old the highest-paid English player in the top tier at present.

Grealish trails only Kevin De Bruyne in terms of earnings at Manchester City, the midfielder signing a new contract earlier this year that will tie him to the Etihad until 2025.

De Bruyne has established himself as one of world football’s finest players since returning to the Premier League at City and last season entered the divisions’s all-time top 10 for assists.

His average of 0.43 assists per game is higher than any of the players above the Belgian in the all-time rankings and he is now just three short of moving past David Beckham.

De Bruyne has been named as the PFA Player of the Season in each of the past two campaigns and remains the leading light amongst a collection of stars in Pep Guardiola’s squad.

Romelu Lukaku’s record-breaking move to Chelsea this summer came alongside a bumper pay-packet, the west Londoners parting with £97.5m to sign the forward from Inter Milan.

Lukaku has raised his game to new standards since leaving Manchester United for Italy two seasons ago, scoring 64 goals in 95 appearances and being named as Serie A’s Most Valuable Player following Inter’s title success last season.

Thomas Tuchel identified the Belgium international as the player to lead the line for Chelsea, who will be hoping for a prolific return on their investment that has included a long-term contract worth £450,000-a-week.

Ronaldo’s return to Manchester United comes alongside a Premier League record contract, with the five-time Ballon d’Or winner set to earn a staggering £480,000-a-week during his second spell in English football.

It’s a huge outlay for a player who will turn 37 next season, but Ronaldo’s 29-goal league campaign for Juventus last season proved there’s plenty left in the tank.

Ronaldo’s haul saw him become the first player in history to win leading scorer accolades in England, Spain and Italy, and the Portugal captain will be aiming for a second Premier League Golden Boot this season.

However, Ronaldo’s contract is still some way short of the wages earned by PSG superstars Lionel Messi (£1m-a-week) and Neymar (£600,000-a-week).