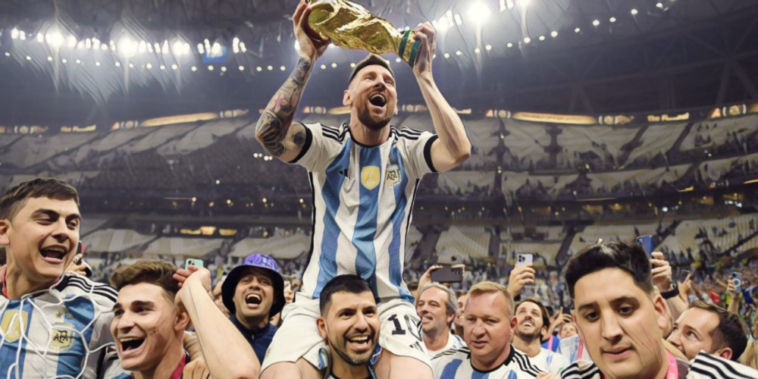 Lionel Messi wrote the perfect script after leading Argentina to World Cup success this winter, with the all-time great bowing out on the world stage in dream fashion.

Messi was the star of Argentina’s triumphant campaign in Qatar, as he scored seven goals – including two in the final – to crown the South Americans world champions for a third time.

Messi’s magical performances were recognised with the Golden Ball award, as he became the first man to win the accolade on two occasions. The seven-time Ballon d’Or winner also became just the fourth man to win the World Cup and Golden Ball in the same tournament, since the award’s official introduction in 1982.

Here are the four men to have achieved the feat.

Paolo Rossi’s inclusion in the Italy squad for the 1982 World Cup created controversy, with many against his participation after recently returning from a two-year ban for his role in a Serie A match-fixing scandal.

Rossi made just three appearances in the 1981/82 season for Juventus, but Italy manager Enzo Bearzot gambled on the forward and would be rewarded for his leap of faith. After an initial slow start at the tournament, Rossi illuminated the latter stages for the Azzurri.

"Your whole life is inside that trophy" 🏆#OTD in 1982, @PablitoRossi helped Italy win their third world title. The @azzurri legend shared his memories 🇮🇹🙌 pic.twitter.com/6O0UGB00Jq

He scored a stunning hat-trick in a 3-2 win over favourites Brazil, with Rossi at the centre of one of the World Cup’s great games with an iconic individual performance. In the semi-final he scored twice more as Italy edged past Poland, before opening the scoring in the final victory over West Germany.

His six goals earned Rossi both the Golden Boot and Golden Ball awards, as Italy celebrated a third World Cup triumph. In terms of the official awards, he is the only man to have won all three accolades in the same tournament, though Garrincha (1962) and Mario Kempes (1978) were retrospectively handed the unique hat-trick.

There’s been no shortage of great players who have inspired their side to World Cup success, but rarely has one carried the weight of expectation quite like Diego Maradona.

Mexico ’86 was the height of Maradona, as he embarked on a one-man crusade to lead Argentina to their second world title. He scored five goals and provided five assists in a sensational tournament, where his performances earned him the Golden Ball award.

The quarter-final win over England is perhaps the most memorable game of his career, as he scored two goals – one that caused outrage and another that created astonishment – to send Argentina into the last four. His first came via his hand as he punched the ball past Peter Shilton, but the officials missed the incident and Maradona’s ‘Hand of God’ was born.

Moments later he scored a scintillating solo goal, skipping past a succession of English opponents in a slaloming run that began inside his own half.

Maradona scored twice more, including another brilliant individual effort, as Belgium were beaten in the semi-finals, before creating the winner for Jorge Burruchaga against West Germany in the final.

That summer was the peak of Maradona’s brilliance, a talent that some still regard as the greatest of all time.

Romario almost missed the 1994 World Cup after a fall-out with Brazil coach Carlos Alberto Parreira, but returned in time to salvage their qualification campaign.

He scored both goals in a 2-0 win over Uruguay to reach USA ’94, where he starred to be named as winner of the Golden Ball.

Romario arrived at the tournament after a sublime season at Barcelona, in which he had scored 30 goals in 32 league appearances for the Spanish side. In the USA he partnered Bebeto in a formidable frontline, one which inspired Brazil to a fourth world title.

🔙 The 15th #WorldCup ended in ecstasy for Brazil #OnThisDay in 1994 🇧🇷

🥇 Those toe-pokes, that header, the shootout penalty in the Final, the @adidas Golden Ball… it undoubtedly belonged to @RomarioOnze 🤩pic.twitter.com/V86umnm8E5

Romario scored five goals at the finals, netting in each group game against Russia, Cameroon and Sweden, before adding his fourth of the tournament in a thrilling quarter-final win over the Netherlands. Brazil faced Sweden in a semi-final rematch and Romario’s header proved decisive to book the Selecao’s spot in the decider.

A goalless draw with Italy saw the final decided on penalties and Romario converted the second spot-kick for the South Americans. He was a fitting winner of the Golden Ball award and later won the 1994 FIFA World Player of the Year award.

When historians look back on the 2022 FIFA World Cup, it will be remembered as Lionel Messi’s tournament.

In what was pre-announced as his final chance at the ultimate success, Messi led Argentina to a third world title and completed his list of major accolades. Messi had suffered four previous major final defeats with the national side, before the 2021 Copa America ended his wait for success with La Albiceleste.

Victory in the Finalissima added more silverware and proved Argentina could compete with Europe’s best, and the South Americans arrived in Qatar on a 36-game unbeaten run. After a shock setback against Saudi Arabia, Messi led the team through the tournament with a string of standout showings.

He scored seven goals and provided a further three assists, while he retained his unwavering belief even when Argentina threatened to snatch defeat from victory. His tournament was littered with unforgettable moments, from his eye-of-the-needle assist against the Netherlands to his bamboozling of Josko Gvardiol in the semi-final win against Croatia.

In the final he went toe-to-toe with Kylian Mbappe, as the old generation took on the new in an engrossing final that saw two superstars drive their teams onwards. It was Messi who prevailed, with his long-awaited World Cup success adding weight to his claim as the greatest footballer the game has seen.