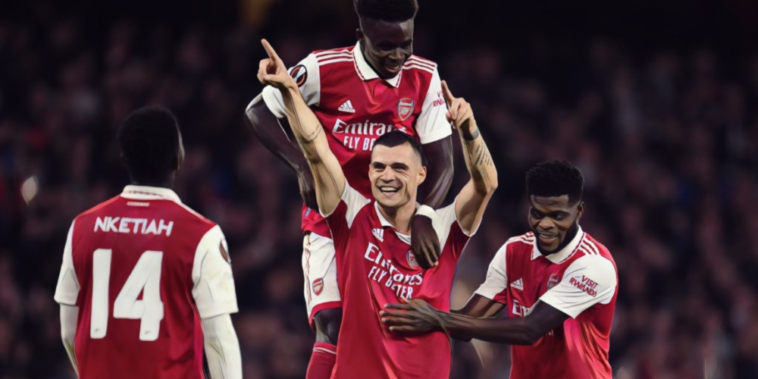 Mikel Arteta has praised the contribution of Granit Xhaka this season, after the midfielder’s goal secured Arsenal’s progress to the Europa League knockout rounds.

Xhaka struck the winner as Arsenal beat PSV Eindhoven 1-0 at the Emirates on Thursday, with the Switzerland international maintaining his fine form this season.

The 30-year-old has had a remarkable redemption at Arsenal and captained the side during the win over PSV, capping an impressive performance with a low effort into the bottom corner for the game’s decisive goal.

Arteta was full of praise for the midfielder, who was stripped of the captaincy under former manager Unai Emery and came close to leaving the club, at his post-match press conference.

“He deserves that,” he said. “He has faced adversity in difficult moments, he has put his arm up when he had something different to do. His work ethic, the way he is as a person, the way he treats everyone around the club, and the love for this football club and profession is unquestionable, he fully deserves that and I’m really happy to see him enjoying his career.”

Xhaka has impressed in a more attacking role this season, scoring three goals and providing three assists in all competitions, and Arteta has been delighted with his performance level since tweaking Xhaka’s role.

“We believed he had the qualities to do that, and sometimes it’s just unlocking something in the players mind and be more open and be receptive to all the things, he’s been extremely open and his work rate all the time to learn is fantastic, and now I think it’s paying off.”

Arsenal’s win over PSV was the club’s eighth in succession in all competitions, while it was the Gunners’ third straight 1-0 win. Arteta was pleased with another clean sheet from his side, who appear to be growing in confidence as the season progresses.

“Great to have clean sheets, I think today we should’ve scored many more goals, the same in the first half against Leeds, that will come but I’m really pleased with the performance and how we played.”