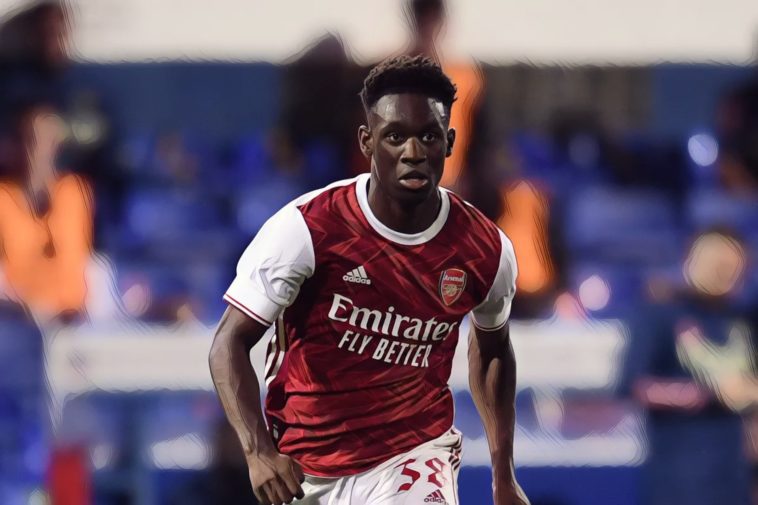 Mikel Arteta believes that Folarin Balogun can help take Arsenal ‘to the next level’ and has revealed the club are trying to ‘convince’ the youngster to sign a new contract at the Emirates.

Balogun has just months remaining on his current contract and came close to leaving the north London side during the summer, with Brentford and Sheffield United amongst the clubs to have expressed an interest in the forward over the past year.

The latter saw a £3m bid rejected during the summer as Arsenal chose to keep hold of the teenager, who remains in contract talks over an extension after making his senior debut as a late substitute against Dundalk in the Europa League last month.

Balogun has travelled with the Gunners’ squad for their clash with Molde in the same competition this evening and will be hoping for further involvement, with Arteta admitting he is desperate to secure the long-term future of the academy graduate.

“You can see the talent is there, the ambition is there and he can fit with our stricture and progress in the future.

“He’s part of the DNA and myself and the club are working to try to extend his contract. We’re trying to change the situation that we are in at the moment with him, and trying to convince him that this is the right place for him.”

After coming close to leaving during the summer it has been a rapid change in fortunes for Balogun who is keen to follow the likes of Bukayo Saka and Eddie Nketiah into the first-team setup, and Arteta has revealed the changes he has seen in the 19-year-old, who he says can form part of a young contingent that can take the club ‘to the next level’.

“I have decided that I want to keep the player. The moment that I started to see more of the player and change certain things that I didn’t agree with, we decided to give it a go, tried to convince the player, try to show him what we want to do with him, why he fits in with what we are trying to do at the club.

“The young talent and the top talent that we produce at the academy is with the final aim to put them in the first team.

“When I signed for this club it was one of the things that excited me the most because I love to work with them and it’s part of our DNA and the history of the club. When we have them, let’s keep them and we really think they are players that can take us to the next level.”