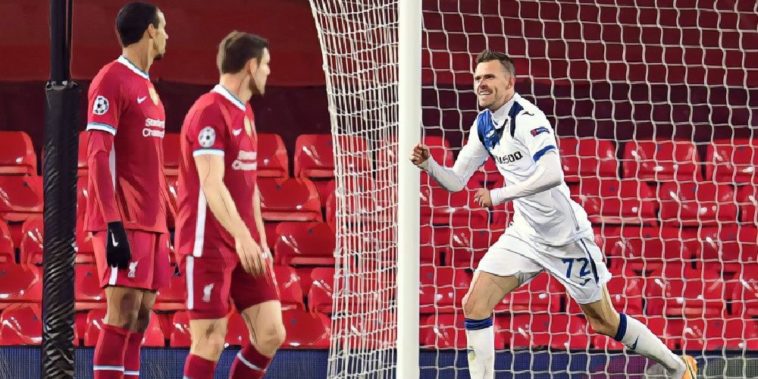 Liverpool missed the chance to book their place in the knockout stages of the Champions League, suffering a 2-0 loss to Atalanta at Anfield.

Jurgen Klopp made a number of changes for the visit of the Italian outfit, with Mohamed Salah returning to the side following his coronavirus enforced absence, while the likes of Divock Origi, Kostas Tsimikas, Neco Williams and Rhys Williams were all handed starts.

As it was, it was a somewhat underwhelming first half on a cold evening at Anfield, the hosts mustering just a solitary shot as last season’s quarter-finalists had the better of the play.

Liverpool continued to struggle after the break, and they eventually fell behind on the hour mark, a brilliant curling ball from Alejandro Gomez from the left finding Josep Ilicic, who slid in at the back post to poke home past Alisson.

Four minutes later and things went from bad to worse for the Reds, another ball from Gomez in towards the back post was nodded back into the middle, with Robin Gosens pouncing to double the visitors’ advantage.

Liverpool made a number of changes but were unable to really affect the game, the home side having an all-round off day, with the Serie A outfit heading back to Bergamo as deserved winners.

Atalanta are the first team to beat Liverpool at Anfield in 90 minutes since Chelsea in September 2018.

The result is Liverpool's first loss in the Champions League group stage in over six years 🤯 pic.twitter.com/uCmvTA6Fq7

Speaking afterwards, Jurgen Klopp admitted his side deserved to lose, before having another whinge about the fixture scheduling.

“It was not a good game. From both teams, didn’t create a lot, until they scored the goals,” he told BT Sport.

“A deserved defeat in a difficult game. The ref didn’t whistle a lot and that makes it even more difficult, for both sides. It was unbelievably intense and you need some breaks.

“When the first half is gone, you usually settle but for some players who didn’t play for a while, it was very intense for them. We didn’t find a way in the game.

“Easier to talk about a good game. We had moments but not real chances. It could happen to other teams. You ask us to go Saturday at 12:30, which is nearly a crime. That is nothing to do with the result, but congratulations to you.

“Thumbs up, no injuries and we go again.”

Next up for Liverpool is a trip down to the South Coast to face Brighton at the AmEx in the 12:30 kick off on Saturday, before hosting Ajax in the Champions League next Tuesday.