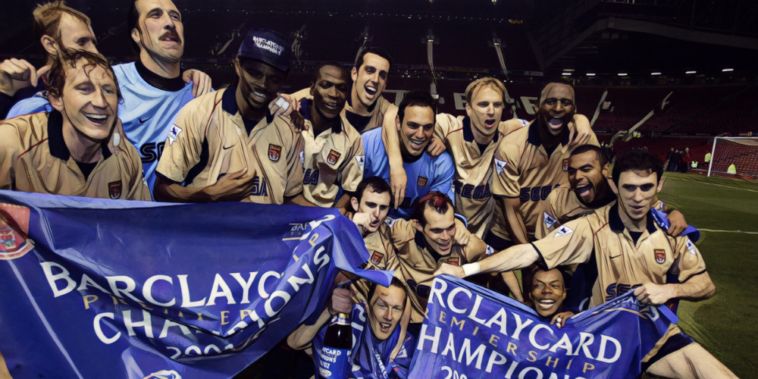 Arsenal against Manchester United proved the most iconic Premier League rivalry during the late nineties and early 2000s, the two sides winning every league title across an eight-year period at either side of the turn of the millennium.

Fixtures between the two sides were always highly charged and pressured affairs, including a title-decider at Old Trafford in the penultimate fixture of the 2001/02 Premier League campaign.

Arsene Wenger’s side had claimed the FA Cup with victory over Chelsea four days earlier and were chasing a domestic double, the Gunners in the knowledge that victory would win the title and dethrone the defending champions in their own backyard.

The north Londoners were without key players in Thierry Henry, Robert Pires and Tony Adams, whilst Dennis Bergkamp was deemed only fit enough for the substitutes’ bench, but a 1-0 win sealed the title and secured a second domestic double in just five seasons.

Arsenal’s 2001/02 vintage is perhaps the least celebrated of their three Premier League title-winning sides, but a formidable team nonetheless and one well worth remembering.

Here is a look back Arsenal XI that clinched the league title at Old Trafford in 2001/02.

After missing more than four months of the season, he returned in February for the run-in as Arsenal finished the season with a 13-game winning run to seal the title, the England international keeping 10 clean sheets in just 17 league appearances.

Seaman was selected as England’s number one for that summer’s World Cup, though his misjudgement of Ronaldinho’s looping free-kick saw the Three Lions exit to Brazil in the last eight.

Lauren was one of the Premier League’s most reliable right-backs during his Arsenal peak, twice winning the league title with the Gunners and – alongside every outfield member of this XI – forming part of the club’s ‘Invincibles’ side two years later.

The right-back missed part of the season due to his African Cup of Nations commitments as Cameroon won the trophy, before returning to play an important role in Arsenal’s title success, memorably scoring a decisive late penalty in a 2-1 north London derby win over Tottenham.

Lauren spent six seasons with the Gunners and made 242 appearances before moving on to Portsmouth, where he lifted the FA Cup alongside former Arsenal teammates Kanu and Sol Campbell in 2008.

Part of the old guard that blended with Arsene Wenger’s arrivals to create three title-winning teams, Keown made 449 appearances for Arsenal across two spells with the club.

The defender was known for his uncompromising style and revelled in battles with opposition forwards, often relentless in his aggression to regain possession and nullify attacks.

Keown was included in the starting side at Old Trafford in the absence of club captain Tony Adams, with the veteran’s experience remaining valuable to the Gunners over the next two seasons, before finishing his career with spells at Leicester and Reading.

Sol Campbell burnt bridges and broke friendships after making one of the most controversial moves in Premier League history ahead of the 2001/02 season, the Tottenham captain joining north London rivals Arsenal on a free transfer.

Campbell had established himself as one of the best centre-backs in the division at Spurs, but crossed the capital divide in search of silverware with his decision rewarded during a memorable debut campaign.

The England international scooped a domestic double and remained a cornerstone of the Arsenal side over the next four seasons, adding a further league title and two additional FA Cup winners’ medals.

Cole was a fixture in Arsenal’s best teams of the Premier League era after coming through the academy ranks, breaking into the team the previous season before becoming an undisputed first-choice in 2001/02.

Cole was a brilliant defender and a player capable of influencing games when pushing further forward, the club’s domestic double part of five major honours he won in north London.

The left-back left in acrimonious circumstances to join Chelsea in 2006 and continued to compile an extensive collection of silverware while at Stamford Bridge, winning eight more major trophies including one league title and the Champions League.

Capped on 107 occasions for England, he is the most decorated player in FA Cup history with seven career wins.

No player has made more Premier League appearances for Arsenal than Ray Parlour, a midfielder whose relentless running and commitment made him a hugely popular figure on the terraces.

Christened the ‘Romford Pele’, Parlour rose through the ranks with the Gunners before making his debut as a teenager in the early nineties, remaining a central figure under a succession of managers throughout the Premier League era.

Parlour scored one of the great cup final goals against Chelsea in the days before the Old Trafford win, where his industry and grit helped the Gunners seal a victory that crowned the club champions.

"It's only Ray Parlour" 😉 pic.twitter.com/NErpCWNAGa

The midfielder remained with the club until their 2003/04 title success, though injuries restricted his impact during his latter seasons before a free transfer move to Middlesbrough.

Patrick Vieira’s playing style was a microcosm of Arsenal’s football, a midfielder who combined silk with steel to provide a colossal presence in the centre of the pitch.

Vieira remains one of the best midfielders of the Premier League era and won three league titles during his time with Arsenal, taking over the captaincy from the retiring Adams following the club’s 2001/02 double success.

The France international brought bite and brilliance to the side, a player capable of breaking lines with assured passing or lung-busting runs forward in that familiar long-legged stride.

No player made more than Vieira’s 54 appearances in all competitions during the 2001/02 season and few played a more influential role in the club’s triumphs.

Edu became the first Brazilian to win the Premier League during the 2001/02 season, in what was the midfielder’s first campaign with Arsenal after signing from Corinthians.

He played a bit-part role in the club’s success with just eight league starts for the season, though partnered Vieira for the vital win at Manchester United in the absence of several senior names.

Edu spent four seasons with the Gunners before leaving for Valencia, returning to the north London side after being appointed as the club’s inaugural technical director in 2019.

Freddie Ljungberg arrived at Arsenal as an unknown quantity before becoming one of the club’s modern greats, playing the best football of his career with the Gunners including a brilliant 2001/02 season.

The Sweden international scored 17 goals across all competitions, including a stunning effort against Chelsea in the FA Cup final, his performances seeing Ljungberg named as the Premier League’s Player of the Season.

The mohawked-midfielder’s tireless third-man running was a vital part of Arsenal’s attacking play for almost a decade, with Ljungberg later returning to the club as part of the coaching staff, enjoying a brief spell as interim manager in 2019.

Wiltord signed for Arsenal in a club-record deal following that tournament and became a valued member of the Gunners’ squad, reaching 13+ goals in all competitions in three consecutive campaigns.

The forward started at Old Trafford in the absence of Henry and Bergkamp and ultimately sealed the title for Arsenal, reacting first to Ljungberg’s spilled shot to fire home 10 minutes into the second half.

Leading the line alongside Wiltord was Kanu, one of Africa’s greatest footballing exports and a popular figure for his achievements at Arsenal.

Kanu arrived in the Premier League with an already impressive medal haul after winning the Champions League with Ajax and Olympic Gold with Nigeria, his brilliant footwork and care-free demeanour winning admirers in England’s capital.

He spent six seasons with Arsenal and scored 43 goals in 197 appearances, the two-time African Footballer of the Year twice winning league titles with the Gunners before spells at West Brom and Portsmouth.