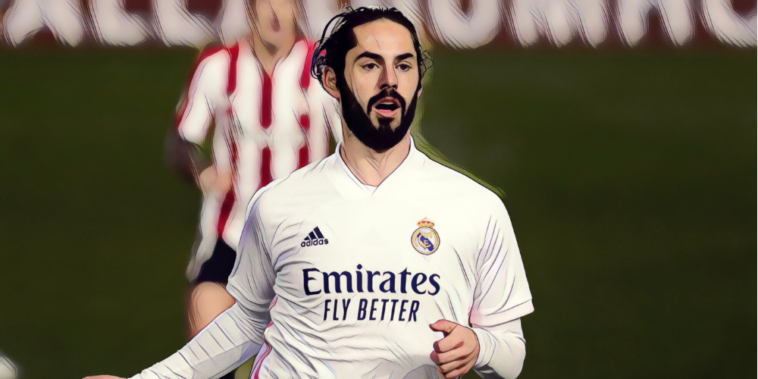 Arsenal are keen on signing Real Madrid midfielder Isco on a ‘short term loan deal’ until the end of the season as the club bid to solve their lack of midfield creativity.

Mikel Arteta is desperate to add some invention to his midfield options during next month’s transfer window with the Gunners having struggled for creativity during the opening months of the campaign, scoring just 16 goals in 16 league fixtures to languish in the bottom half of the division.

After making their worst start to a season in more than half a century Arsenal have revived their fortunes with back-to-back wins over Chelsea and Brighton over the past week, though recruitment plans are now underway ahead of the opening of the transfer window on January 1.

According to the Telegraph, Real Madrid’s out-of-favour midfielder Isco heads a list of potential targets, with the north London side hoping to strike a loan deal for the Spain international until the end of the season.

Isco has struggled for opportunities under Zinedine Zidane this season and has started just three league fixtures, and the 28-year-old is understood to be keen on leaving the Spanish champions as he bids to boost his hopes of making the Spain squad for next summer’s European Championships.

Sevilla have also expressed an interest in signing the midfielder with Isco keen on the switch, though AS reported yesterday that Zidane is reluctant to lose the player in January amid concerns injuries could leave Los Blancos short of depth.

Arteta was asked about speculation linking Arsenal with a move for Isco following the 1-0 win at Brighton on Tuesday night, though remained coy on potential interest and said recent results won’t change the club’s approach to the window.

“The last few results won’t change our approach to the window. And obviously, we can’t talk about any individual players.”

Isco signed for Real Madrid from Malaga in 2013 and has scored 51 goals in 318 appearances for the club in all competitions, winning two league titles and four Champions League trophies amongst his wealth of major honours.

The midfielder has also scored 12 goals in 38 caps for the Spanish national side, though has not received an international call-up for more than a year.