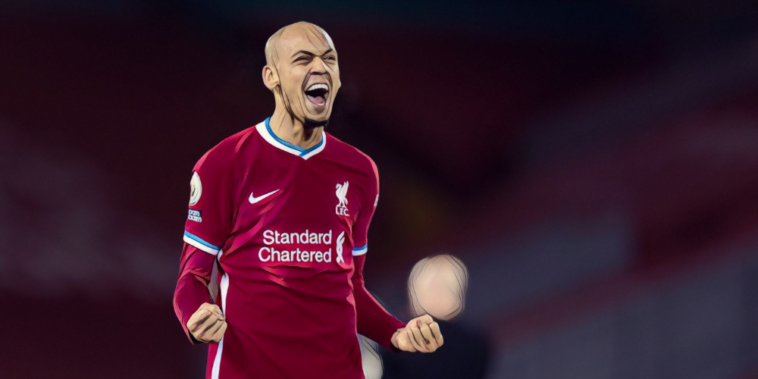 Fabinho has opened up on his adaptation to playing at centre-back for Liverpool amid the club’s defensive injury crisis this season.

The midfielder has been utilised in an unfamiliar defensive role for much of the campaign with the Premier League champions having been hit by a series of injuries, with centre-back duo Virgil van Dijk and Joe Gomez both ruled out with long-term knee issues.

Joel Matip’s ongoing fitness problems also remain a concern and the Cameroonian limped off during Sunday’s 1-1 draw with West Brom with an adductor injury, leaving Liverpool without a recognised senior option at centre-back.

Fabinho’s form in the position has been a major boost to Jurgen Klopp with the Brazil international having thrived in a deeper role, and the 27-year-old admits he has been pleased with adaptation and performances so far this season.

“In my first season, I’d already played as a centre-half and last season, I don’t remember exactly when, but I played some games there, too,” Fabinho told Liverpoolfc.com.

“The manager had prepared me to play in this position, so it was not a surprise when I had to play there because of the injuries and I am happy because it’s worked out good so far.”

Fabinho’s transition has been hugely impressive and the midfielder puts his success down to work on the training ground, revealing how Klopp has helped him with the ‘small details’ and outlining the importance of communication with his teammates.

“The manager has tried to help with small things, positional things or sometimes when to play a long ball or step forward with it,” Fabinho added. “Things like this – the small details – so I can get better. He doesn’t talk too much about it, he has just tried to give me the confidence to play the position.

“I always say the communication is very important with my partners when playing there – the other centre-back, the full-backs and the midfielders. The boys have helped me a lot and now I am used to playing in this position, so I have more confidence to play there. I just want to help the team to play good football and be as good as possible.

“As I said, I know in this position I have to be more communicative with all the players because I can see almost everything on the pitch. I try to help my partners in their positions when they have to close the left or right sides.

Read Also – Best of 2020: Five of the greatest goals from the last year of club football