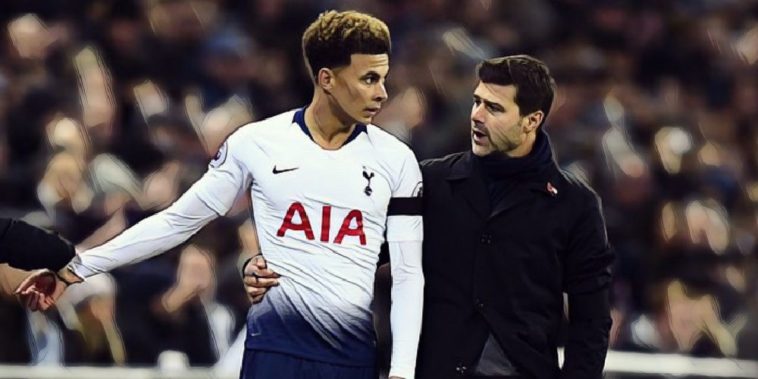 Tottenham are ‘expecting’ Mauricio Pochettino to make enquiries for a number of players as the club’s former manager prepares to take charge of Paris Saint-Germain.

Pochettino is expected to be named as the new manager of PSG following the French champion’s sacking of Thomas Tuchel last week, with the Ligue 1 outfit having made an indifferent start to the season to trail both Lyon and Lille in the title race.

The Argentine has been without a club since leaving Spurs last November and will return to a side where he spent two years of his playing career, his task to maintain PSG’s domestic dominance and bring a maiden Champions League title to the French capital.

According to Eurosport, Spurs are ‘expecting’ their former manager could look towards north London as he seeks to strengthen his squad in next month’s transfer window, the out-of-favour Dele Alli headlining a list of four potential transfer targets including Hugo Lloris, Harry Winks and former PSG full-back Serge Aurier.

Alli was linked with a move to the Parisians during the summer and has endured a difficult spell with Spurs since the arrival of Jose Mourinho as manager, making just three substitute appearances in the Premier League since being withdrawn at half-time against Everton on the opening weekend of the season.

PSG announce the sacking of manager Thomas Tuchel, with Mauricio Pochettino reportedly lined up to replace him pic.twitter.com/tlCrLB0dPC

The 24-year-old is understood to be keen on testing himself abroad and would be provided with an idealistic platform to rediscover his best form at PSG, competing in the Champions League under the guidance of the manager who signed him and handed him his opportunity at Tottenham.

Fellow midfielder Winks is another player who has been linked with an exit despite Mourinho having indicated his desire to keep the 24-year-old, Everton also reportedly monitoring the player who has fallen down the pecking order following the summer signing of Pierre-Emile Hojbjerg.

Winks is keen for regular opportunities as he bids to boost his hopes of making the England squad for Euro 2021, whilst Serge Aurier has also emerged as a target for a shock return to Paris.

The Ivorian previously spent three seasons with PSG before moving to Spurs in 2017 and despite featuring regularly this season, faces strong competition for a starting berth from Ireland international Matt Doherty.

The fourth player understood to be on Pochettino’s radar is goalkeeper Lloris, though prising the Spurs and France captain from the Premier League in the winter window appears unlikely.

Christian Eriksen has also been linked with a switch to Paris with the midfielder having struggled to make an impact at Inter Milan since leaving Tottenham in last year’s January window, the Denmark international having found himself on the periphery under Antonio Conte and expected to leave in search of regular first-team football.