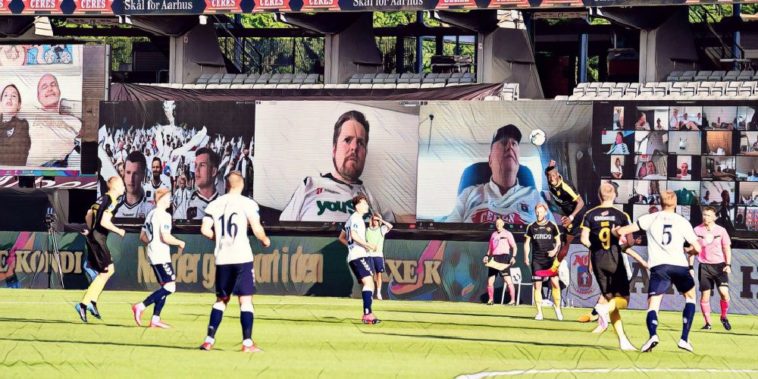 Arsenal are one of ‘several Premier League clubs’ said to be exploring the possibility of a ‘virtual stand’ following the innovative attempt to recreate an atmosphere in the Danish Super League.

AGF Aarhus have installed a huge screen running across one stand, displaying the images of 10,000 of the club’s supporters connected to their behind-closed-doors match against rivals Randers via video-conferencing tool, Zoom.

Each supporter is able to log in from the comfort of their own homes with their images displayed pitchside, and clubs around the world are now considering the method of also creating a virtual crowd as several major league’s prepare for a return to action in the coming weeks.

Denmark became only the second country in western Europe – after Germany’s Bundesliga – to return to action, and the ‘virtual stand’ created by AGF has prompted calls from ‘several Premier League sides’, as per ESPN.

The screen is 130 feet long and 10 feet high (40m x 3m) and clubs have requested information on the logistics of the technology, seeking information on whether it can help create an ‘immersive fan experience’ and help restore the ‘home advantage’ that statistics indicate is being lost during behind-closed-doors contests.

The Premier League is set to return later this month with the first fixtures of the league’s restart scheduled for June 17, with the majority of fixtures set to take place at club’s home stadiums.

According to the report, Arsenal are one of the clubs to have contacted the Danish side in a bid to discuss how the Emirates Stadium could be modified ahead of the league’s return.

AGF believe the solution provides many benefits, with broadcasters able to cut to celebrating supporters. The club also played pre-recorded sound into the stadium to create atmosphere, whilst supporters were placed in smaller meetings with the fans they would usually sit alongside on a regular match-day.

AGF’s ‘virtual stand’ came after the club reached out to Zoom and rented huge screens from a local sponsor, though there are a number of complexities to the idea. Broadcasting rights mean fixtures cannot be directly viewed via Zoom, meaning supporters must watch the fixture on television and log into the video-conference on an alternative device.

There is also the issue of practicality at Premier League stadiums, with the presence of a running track at AGF’s stadium allowing for the erection of big screens lower to pitch level, while AGF also had to upgrade the WiFi in their stadium to be able to effectively run the system.

Two fans were also thrown out of the Randers game after ‘exposing themselves’ on-screen, the club having employed 50 moderators to monitor each of the supporters in virtual attendance, a huge consideration for any Premier League side seeking to upscale the concept.

Bergkamp discusses the best players he played with at Arsenal