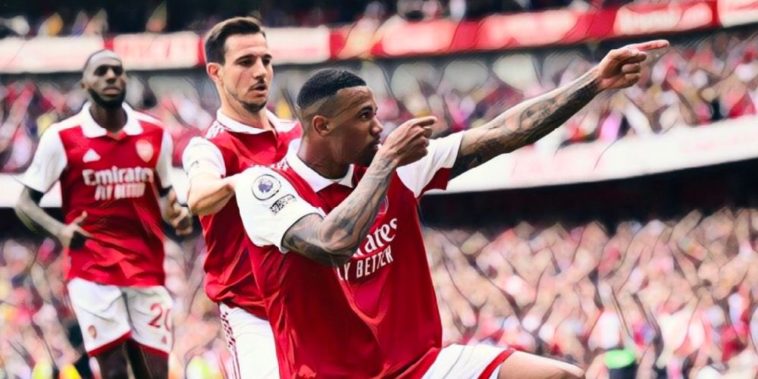 Arsenal convincingly beat Everton 5-1 although the Gunners’ season ultimately ends in disappointment as they were pipped to a fourth-place finish by arch-rivals Spurs.

Mikel Arteta’s side opened the scoring after 27 minutes when former Arsenal man Alex Iwobi handled in the area and Gabriel Martinelli stroked home from the spot. Four minutes later and the home side were two ahead, young striker Eddie Nketiah glancing home from a corner.

The Toffees would pull one back in first-half injury through on-loan Man United midfielder Donny van de Beek, the Holland international ghosting into the area to tap home a Dominic Calvert-Lewin cross.

Arsenal killed the game off just before the hour mark though with set-piece goals from defenders Gabriel and Cedric Soares, before Norweigan playmaker Martin Odegaard rounded off the scoring with a classy finish late on.

Just a couple of weeks ago Arsenal were in pole position to finish fourth until two poor displays resulted in disappointing losses to Spurs and Newcastle, and despite today’s win Gunners manager Arteta admitted missing out on the top four is a bitter pill to swallow.

”We did what we had to do. We knew we needed a miracle and it didn’t occur,” Arteta told his post match press conference.

”The league table it doesn’t lie. Last season Chelsea with 67 points was in the CL this year we have 69 and we’re out of it.

”I cannot assess the season today. I’m still in a lot of pain after Monday. We tried to squeeze the lemon with every drop. That feeling of guilt and not reaching that level is painful.”