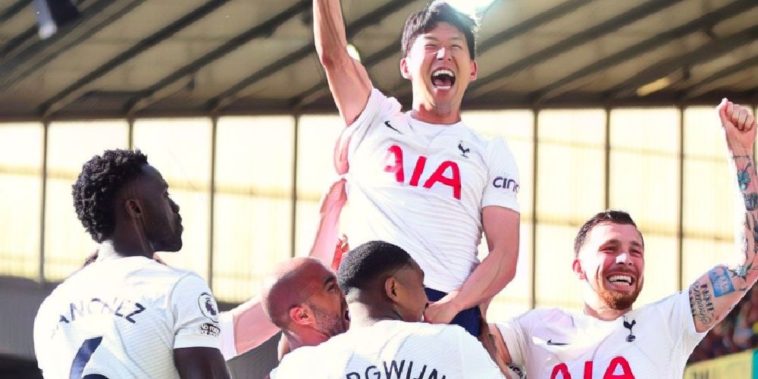 Antonio Conte’s side’s excellent form in recent weeks meant they travelled to East Anglia knowing a win would see them finish in fourth above North London rivals Arsenal, and it was no surprise that Dejan Kulusevski and Harry Kane were able to take advantage of some truly dreadful Norwich defending to all but seal the deal by half-time.

Just after the hour mark, January signing Kulusevski fired home a superb left-footed volley before the clinical Son Heung-Min bagged his 22nd and 23rd of the season; goals that see the South Korean attacker share the Golden Boot with Liverpool’s Mohamed Salah.

Speaking afterwards Son was buzzing to get his hands on the Golden Boot and hailed the impact of Italian coach Conte who guided Spurs to a top four finish after taking over in November.

“Until my goal I was really frustrated that I missed big chances. I told the players I missed the easiest chances and scored one of the toughest tones. I didn’t give up. I wanted to score today. The team helped me a lot at half-time. They wanted to help me, you could see it today.

“This season was a great lesson. Next season we can look forward to the Champions League. Everyone deserves to be there.

“Conte gives us so many different things. Before he came here nobody believed we’d reach the Champions League.”