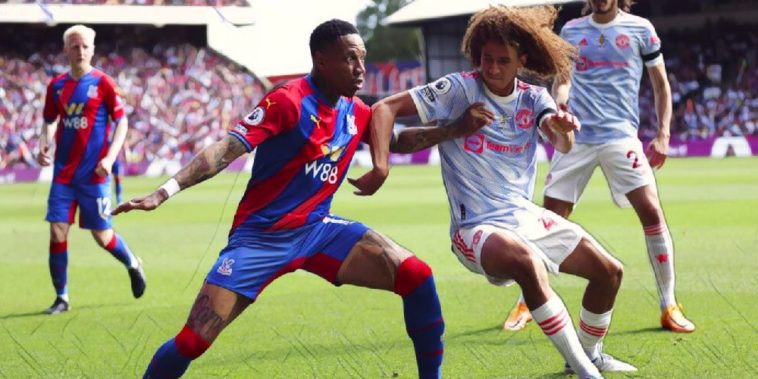 Manchester United stumbled into the Europa League despite slipping to a 1-0 loss to Crystal Palace.

After what has been a truly woeful season that was already guaranteed to end in Manchester United’s lowest points total in their Premier League history, they came into the final game of the season still needing a result to confirm their place in the Europa League.

Cristiano Ronaldo was out of the game with a recurrence of his hip flexor issue, while Marcus Rashford, Jadon Sancho and Luke Shaw were also not involved for the trip to Selhurst Park.

Despite the need for the victory, United – under the watchful eye of Erik ten Hag in the stands – certainly didn’t come out of the traps flying, and in the 37th minute, they fell behind to the dangerous Wilfried Zaha, the Ivorian taking advantage of some poor defending before firing into the bottom corner against his former side.

At the same time on the South Coast, West Ham took the lead in their game against Brighton to leave United staring the prospect of playing in the Europa Conference League football in the face.

However, Brighton produced a second-half comeback thanks to goals from Joel Veltman, Pascal Gross and Danny Welbeck, helping United to qualify for the Europa League despite collecting a paltry 58 points and finishing with a goal difference of zero.

Speaking after the game, Ralf Rangnick analysed his side’s latest underwhelming performance, and said Brighton had done his side a favour.

“Yes, I think Brighton did us a favour to turn the game around. They were losing 1-0 at half-time and scored three goals in the second half,” he told MUTV. “We would have loved to take care of ourselves.

“In a way, the game was indicative of the last couple of weeks, especially when we played away from home.

“We tried, we had big opportunities in the first half to score ourselves, but we didn’t. Especially in the first half, we had too many unforced errors, bad giveaways, and that was exactly the way that we conceded the goal. In fact, it was our assist. The goalscorer was Zaha but the ones who gave the assist was ourselves.

“The way that we defended that shot was also not the way that you have to defend in this league. We had a few opportunities in the second half, but it was not clinical enough, that’s why, in the end, we conceded another defeat away from home.”

United now face a summer of upheaval, with a number of players set to depart the club, while incoming boss Erik ten Hag set to bring in a host of new faces. Rangnick said he was ‘optimistic’ and ‘postive’ for the club’s future.

“We knew [what work lies ahead] before that game. We wouldn’t have needed that fixture today to know that, but I’m optimistic, I’m positive,” he said.

“With the new manager – and Erik [ten Hag] is a top manager – together with our board, with our scouting department we can make sure that we get the necessary reinforcements, the players that help to raise the level of quality again. And then, hopefully, bring Manchester United back into the top four.”

The interim boss thanked United’s travelling support after what has been a dismal season, the Red Devils losing six consecutive games on the road, and collecting their lowest points total since they got just 48 points in the 1989/90 season.

“The fans are amazing. This is one of the biggest assets that the club has and this is why it is so important that we are all working together to get Manchester United back on track and back into the top [four].”