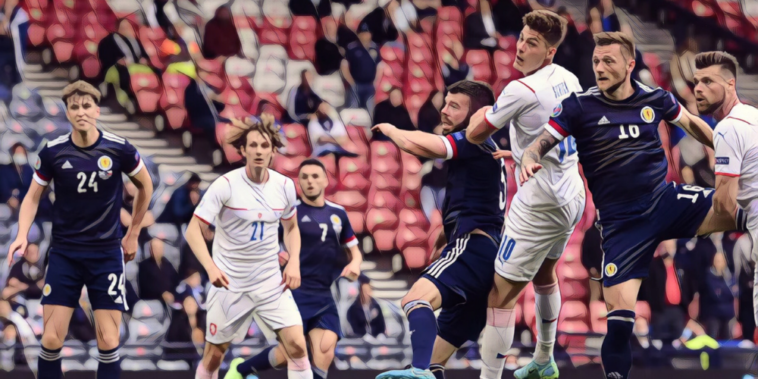 Stuart Armstrong says Scotland were punished for failing to be clinical following the nation’s 2-0 defeat to the Czech Republic in their Euro 2020 opener.

Scotland’s first major tournament appearance since the 1998 World Cup ended in defeat at Hampden Park, as Patrick Schick scored twice for the Czechs either side of the interval.

The Bayer Leverkusen forward rose above Grant Hanley and Liam Cooper to glance home a header, before scoring a stunning second from almost 50 yards to double the Czech’s advantage.

Scotland created chances throughout but failed to find genuine quality in the final third, and Armstrong admits his side were punished for failing to take the opportunities that came their way.

“It was a difficult one, the game was very compact, there wasn’t much space, and we were playing too many long balls for our liking,” the midfielder told the BBC.

“When we passed it, we did quite well but it was hard to break them down.

🇨🇿 Patrik Schick with an effort that will go down in EURO history 🔥#EURO2020 pic.twitter.com/BqINLIPSMH

“Disappointed with the way the first goal went in, apart from that we defended pretty well, and they showed real qualify for the second goal. Not to say we didn’t have chances second-half, we did, and tried to push. They were clinical. At this level you do need to be clinical.

“We need to take experiences of today, learn from what happened, make a few little tweaks to our game. Fundamentally there were some positive moments and we have to carry that through to Friday.

“We’ve got two chances to produce a good performance and get something from it.”

Scotland next face England at Wembley on Friday evening, with the Czech Republic meeting Croatia in the group’s other fixture the same day.