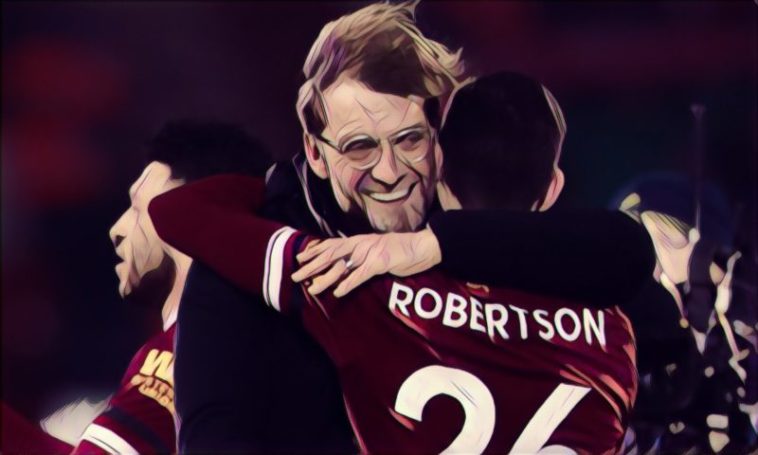 Yesterday’s announcement by the SFA that Liverpool left back Andy Robertson is to be the new captain of Scotland, was met with universal acclaim and congratulatory declarations from across the football community and social media.

The Scottish captaincy marks yet another landmark for the likeable Robertson. It’s fair to say his career has dramatically accelerated since an £8 million transfer took him away from relegated Hull City, across the M62 to Liverpool last summer.

Liverpool had long been linked with a number of left-backs and many sources across the continent were certain a move for German international Jonas Hector was imminent. The rumors remained rumors though as Liverpool turned to The Tiger’s left back and a fairly below the radar signing. In many sections of the fan base, Robertson’s signing was met with shrugs and confusion.

His career under Jurgen Klopp’s guidance was something of a slow burner to begin with as well. Despite Alberto Moreno’s catalog of errors, the Spaniard remained first choice for a big chunk of games in 2017-18, eventually dropping out after picking up an injury in Seville. Robertson’s initial fleeting appearances did leave many frustrated and perplexed, however the plan from Klopp was clear and measured, and began to make a lot more sense as last season progressed.

Once given an extended run and showing the fans, as well as his manager, what he could do, Robertson never gave his Spanish colleague a look in. His ability to overlap at will, distribute with growing conviction and ability to offer solid defending where a massive hit with the Kopp after almost a decade of woeful options in that position.

What was more encouraging though, was the gradual, piece by piece, improvement in Robertson. Game after game, and especially in The Champions League, the Scot was a sensation. Bombing forward and making brave, valuable forays into opposition territory, he would often deliver a beautifully weighted ball, begging to be gobbled up by the forward line. He also showed real hunger and commitment, something any fan base laps up, unsurprisingly, the Anfield faithful took him as one of their own. He’s still improving as well, a testament to wonderful work being done behind the scenes, on the training ground.

Van Dijk’s arrival and impact on Liverpool’s defensive improvement is rightly lauded. However, Robertson’s installation at full back and the options he provided going forward after the New Year, arguably softened the blow of Coutinho’s departure. He has gone from something of unknown entity, to one of the best players in his position, in the league.

It cannot be over stated how important a role Jurgen Klopp has had in Robertson’s development. The German took his time with the then twenty-three year old, allowing him coaching and valuable education as he adapted to the demands of playing at a superior level.

The difference in the player just twelve months on is truly astonishing.  It’s a testament to Klopp and his coaching team, that he can improve a player so dramatically.  He has a pedigree of getting the best out of the vast majority of the players he works with and has now got a portfolio of work at Liverpool that is bound to impress potential future targets. Many are likely to have sat up and taken notice already.

At present, it would be very easy to say that whomever throws the most money at a player wins. It is still very much the case for some players, but for others, the allure of improving as a player will be very strong. Klopp can point to examples like Andy Robertson, Roberto Firmino, Sadio Mane and even senior players like James Milner, who have no doubt come on massively since working with him.

This may well tip the balance when it comes to attracting the very best players in future transfer windows. Liverpool are no longer getting blown out of the water financially, and if they can offer the chance to work with such a great team, then the hope will be for more future success stories in the transfer market.