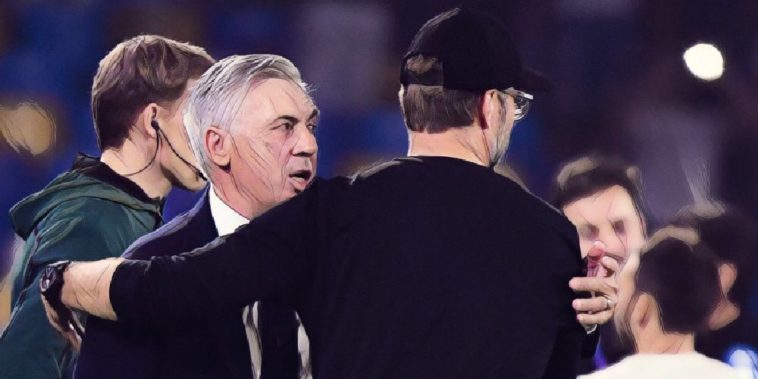 Carlo Ancelotti still believes Liverpool are ‘the best side in Europe’ despite the holders 2-0 Champions League defeat to Napoli on Tuesday night.

Liverpool‘s defence of their crown began with defeat in Naples, goals from Dries Mertens and Fernando Llorente seeing Jurgen Klopp’s side beaten in the first fixture of this season’s group stage.

The Group E clash looked to be heading for a goalless draw until the host’s were awarded a controversial penalty, Andy Robertson adjudged to have brought down Jose Callejon despite replays appearing to show minimal contact, much to the dismay of Klopp.

Belgian international Mertens converted from the spot, before former Tottenham forward Llorente capitalised on a mistake from Virgil van Dijk to seal the win in injury time.

The Reds were also beaten by the Italians in last season’s group stage before going on to lift the trophy in Madrid, and Napoli boss Ancelotti has revealed he reminded Klopp of the two side’s previous during a post-match chat with his opposite number.

“Why did we smile at the end when we shook hands? Because I told him: ‘Don’t you worry, if you lose in Naples, then you end up winning the Champions League!”

Ancelotti was full of praise for his side following their performance, with the former Real Madrid and Chelsea boss believing his side had begun their European campaign by beating ‘the best team in Europe’.

“It’s always tough against Liverpool, from the first minute to the last. We had to sacrifice ourselves, but without losing our identity,” said Ancelotti.

“The strategy was to play a complete game. High pressure if possible, but also defending deeper if needed. We did everything well.

“We have to get used to the different moments of the game. When Liverpool were in control we did well in defending and then took our chances.

“It was a very balanced game. So we did well, because I consider them the best team in Europe.”