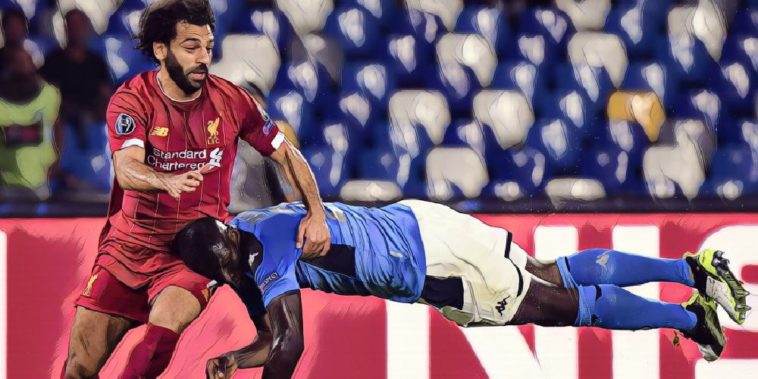 Liverpool fell to a Champions League defeat away to Napoli for the second season in a row, losing 1-0 in Southern Italy.

Carlo Ancelotti’s side edged the first half which had few opportunities but Fabian Ruiz – Napoli’s impressive young Spanish midfielder – called Adrian into action with a quickfire double save early on. Roberto Firmino had Liverpool’s best chance of the first 45, glancing a header just past the post from a well-worked short corner.

The second half was fairly even, with Dries Mertens forcing Adrian into an excellent save before Mane squandered a brilliant opportunity to break the deadlock, the Liverpool man overhitting a simple pass to Salah when two-on-one following a swift counter-attack.

However, just as the Merseyside club looked to be taking control, Napoli broke and Roberston left a leg dangling that Callejon tripped over. Contact was minimal but VAR didn’t overturn the referee’s decision and Merten’s slammed home the resulting penalty.

An uncharacteristic late error from the often imperious Virgil van Dijk compounded the defeat as his misplaced pass put former Tottenham striker Llorente through on goal and he exacted a small amount of revenge for last year’s final defeat.

Let’s see how the players fared…

Two comfortable saves from Mane and one great save low to his left-hand corner from Mo Salah.

Very rarely ventured forward but stuck to his defensive duties admirably, tackled Mane well at the back post before putting in a good challenge on Matip.

Looked good for the most part, tackling well and getting round on the cover several times. Had a nervy spell mid-way through the second half after an awful skewed header presented Salah with a great chance that Meret saved well.

A real rock at the back for Napoli all night long, looked good and composed on the ball, headed everything away and outmuscled Firmino in the box to dispossess the Brazilian.  Salah got the better of him once in the first half but other than that held the Italian defence together very well.

Looked very good in the challenge and made a vital interception to prevent Salah from scoring. Got forward more than Di Lorenzo with some success, putting in a great cross to set up Mertens for a brilliant chance.

Had a relatively quiet game but threatened with some dangerous crosses.

Partnered Ruiz well in midfield before being substituted in the 74th minute for Elmas. Dispossessed the Liverpool midfielders well before playing good, simple passes to start Napoli attacks.

Played very well, dictating the tempo in the middle of the park for large parts impressing with his passing. Had two good shots that were well saved by Adrian early on and put a dangerous ball across the face of goal that Van Dijk cleared.

Chose the wrong pass after good work to get past Fabinho, found the pockets really well, subbed off 65 mins for Zielinski

Made very little impact on his Napoli debut in the Champions League, as he struggled to deal with the physicality of Matip and Van Dijk.

Put in some dangerous crosses and worked hard defensively. Was unlucky not to score as Adrian made a great stop to deny the Belgian at the back post but took his penalty well, smashing the ball low and hard.

Only Diego Maradona and Marek Hamšík have more goals for the club. pic.twitter.com/1GnMvJjCXN

Made little impact after coming on but didn’t do anything wrong.

Cleared from an Alexander-Arnold cross before scoring late on to seal the victory after pouncing on Van Dijk’s loose pass before tucking it home past Adrian.

Unlucky to be on the losing side on his Champions League debut after making two good saves from Ruiz early on and then made a world-class stop to deny Mertens at the back post pushing the ball over his bar. He got a hand to Napoli’s penalty but there was nothing he could do to stop it.

Did well defensively on the cover several times and was pretty solid without threatening in the final third as we have become accustomed to.

Looked solid and comfortable on the ball, often getting his head to crosses or intercepting Napoli passes. Could do nothing about either goal.

Was imperious in the air, heading away at least four Napoli corners and several other crosses. Did well when one-on-one with Lozano, before making a very uncharacteristic mistake late on, gifting Llorente a goal after a loose pass on the edge of his own box.

Booked for off the ball tug back on Callejon and was very rarely a threat going forward. Harshly adjudged to have given away a penalty but gave the referee a decision to make after clumsily leaving a leg out for Callejon to go over, just as Liverpool were starting to dominate.

Grew into the game, tackling and passing well. Set up a couple of half chances and whipped in more than one good cross.

Put in a great performance, screening the Liverpool backline, tackling well and playing a range of passes to start off Liverpool counter-attacks.

I run out of superlatives, to be honest. He is what Liverpool need, and he just delivers. Brilliant. pic.twitter.com/AEdBSIgJfc

Worked hard for his side as ever, but skied the ball over the bar from a half-decent chance after Salah’s good run. Played a great ball over the top for the Egyptian and put in a nice cross from a short corner that Firmino headed wide. Booked for a clumsy challenge on Callejon before being subbed off on 65 mins for Wijnaldum.

Looked the most likely to score for Liverpool, was lively and threatening with his pace early on. Was unlucky not to score from a very good shot that was saved brilliantly by Meret.

Got better as the match wore on, glanced a header just wide from a short corner. Linked up well with his strike partners well as always, almost getting Mane in on goal on a couple of occasions but good Napoli defending denied the Senegalese.

Worked hard defensively and had a couple of half-chances saved by Meret. Was guilty of wasting arguably Liverpool’s best chance when he and Salah found themselves in a two-on-one situation following a breakaway from a Napoli corner. Mane delayed the pass too long and then over hit the ball to Salah and the chance was gone.

Had little impact on the game after coming on for Milner on 66 mins.