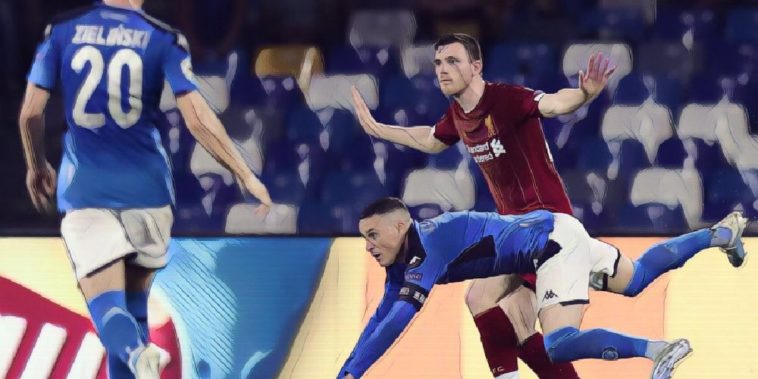 Jurgen Klopp has criticised the decision to award Napoli a penalty during Liverpool’s 2-0 Champions League defeat in Italy on Tuesday night.

The European champion’s defence of their crown began with defeat in Naples, as late goals from Dries Mertens and Fernando Llorente sealed victory for Carlo Ancelotti’s side.

The Group E clash had appeared to be heading for a goalless draw until the hosts were awarded a controversial penalty with just eight minutes remaining, Andy Robertson adjudged to have brought down Jose Callejon in the penalty area despite replays appearing to show minimal contact.

Former Tottenham forward Llorente secured the win after capitalising on a mistake from Virgil van Dijk in injury-time, though Liverpool boss Klopp was left unhappy at the earlier penalty decision awarded to Napoli.

All of this over Napoli’s penalty?

Robertson made an attempt to reach the ball yet he didn’t touch it, while Callejon played it smart (cheap? Yes, but also smart) after that flick to get a penalty.

So even with the VAR check, the ref might still call for a penalty. pic.twitter.com/8HIcQEeHDu

“For me it’s clear and obvious, no penalty, because Callejon jumps before he has any contact,” Klopp said in his post-match press conference. “But we cannot change that so we have to be critical with ourselves.

“We did well in a lot of moments, we played a lot of good football but we didn’t finish off.

“In the second half we had this wild game, we were running, they were running. They’ve killed everybody on the pitch, started controlling again and then we’ve conceded a penalty.

“Of course that doesn’t help and I’ve seen it now, I don’t think that’s a penalty.”