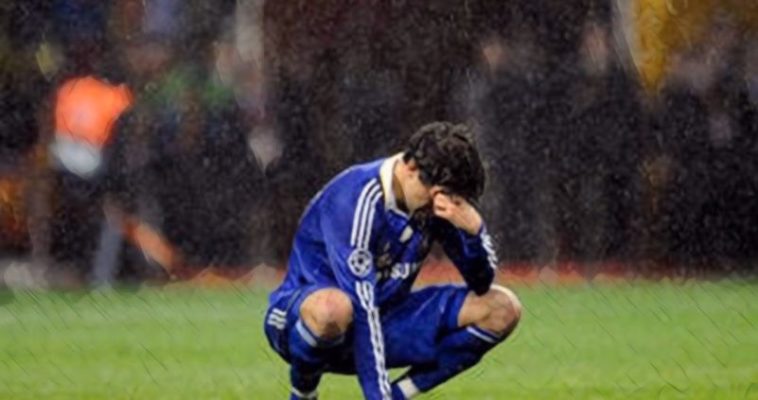 One of the finest midfielders of a generation and an undisputed great of German football, Michael Ballack’s career when revisited is a paradox of much success tainted by an overriding sense of unfulfillment.

Ballack’s collection of silverware includes five domestic league titles won at three different clubs, in addition to almost a century of caps for a German national team for which he long provided inspiration and reigned as his country’s captain.

The former Bayern Munich and Chelsea star’s story will forever, rightly or wrongly, be associated with a series of agonising near misses, Ballack possessing a collection of runners-up medals which makes for remarkable reading.

We’ve decided to revisit the midfielder’s career and analyse the story of one of the sport’s most notorious footballing bridesmaids:

Ballack established himself as a household name during a two-year spell in the first-team at FC Kaiserslautern, helping the club become the first newly-promoted side to win the Bundesliga in 1998.

After two seasons, however, Ballack left for divisional rivals Bayer Leverkusen – turning down an approach from Bayern Munich in the process – with the club having developed a reputation for nurturing young talent.

His first season at the BayArena ended in agony – a theme throughout his career – as Leverkusen blew the title on the final day of the season. Needing just a point to claim the Bundesliga, Ballack scored an own goal in a 2-0 defeat to Unterhaching to hand Bayern Munich the title on goal difference.

Leverkusen’s developing side had shown progress in recent seasons, however, and the fruits of the club’s labour shone through during a memorable 2001/02 campaign, though a season that had promised a famed treble fell apart in devastating fashion.

Leverkusen – who have never won the Bundesliga – led the league by five points with just three games remaining before stuttering over the final fixtures of the season to be overhauled by Borussia Dortmund, later losing the final of the DFB-Pokal to Schalke in Berlin.

The club’s and Ballack’s most memorable loss came in the final of the Champions League, however, when after progressing past both Liverpool and Manchester United in the knock-out stages, Leverkusen lost 2-1 to Real Madrid in Glasgow courtesy of one of the competition’s all-time great goals by Zinedine Zidane.

A season which had promised history unravelled in spectacular style, Leverkusen branded ‘Never-kusen’ after becoming the second club in history – after Barcelona in 1986 – to finish as runners-up in their domestic league, cup and the Champions League in a single season.

After a traumatic end to the season with Leverkusen, Ballack needed to bounce back from his disappointment as he prepared to travel with an unfancied Germany team to the 2002 World Cup finals in Japan and South Korea.

Perennial contenders, Germany had finished behind England in qualification for the tournament and needed a play-off victory over Ukraine to book their place at the finals, with bookmaker’s ranking Rudi Voller’s side as outsiders for the game’s biggest prize.

Ballack and Germany navigated the group stages with minimal fuss before the midfielder proved an inspirational figure throughout the knock-out stage campaign. Ballack scored the only goal of the game in quarter-final and semi-final victories over South Korea and Turkey respectively, but a booking in that latter fixture meant he would miss the final through suspension.

Watching on from the sidelines in Yokohama, Ballack could do nothing as a Ronaldo-inspired Brazil emerged victorious in Japan, securing a 2-0 victory and adding another silver medal to the midfielder’s growing collection.

Shortly after the disappointment of the World Cup, Ballack left Leverkusen for Bayern Munich, turning down interest from the likes of Real Madrid to sign for Germany’s biggest club.

His time in Bavaria, unsurprisingly, was hugely successful as he won three domestic doubles in four seasons with Bayern, but with the club struggling to make an impression in Europe he decided to depart on a free transfer after four seasons in search of the prize he truly craved – the Champions League.

The opportunity to sign one of Europe’s leading talents on a Bosman saw some of the game’s biggest clubs circle, but it was Chelsea who won the race for his signature ahead of Premier League rivals Manchester United.

The west London side had won back-to-back titles under Jose Mourinho and – like Ballack – had their eyes set firmly on winning the Champions League, recruiting the German captain alongside former Ballon d’Or winner Andriy Shevchenko in the summer of 2006.

It seemed the perfect fit.

Chelsea, however, failed to find the dominance of the previous two seasons and finished as runners-up to a Manchester United side inspired by a breakthrough season from Cristiano Ronaldo, though Ballack’s debut campaign was only the start of his near misses in English football.

Mourinho departed in shock circumstances during the midfielder’s second season at Stamford Bridge, before Avram Grant led the club to a succession of runners-up finishes in the 2007/08 campaign.

Beaten by cross-city rivals Tottenham in the final of the League Cup at Wembley, the Blues finished second to Manchester United once more in the Premier League before losing out to the same side in the final of the Champions League – beaten via a dramatic penalty shoot-out in Moscow.

Ballack – for the second time in his career – had finished as runner-up three times in the same season, including in a second Champions League final.

Once more on the back of a devastating end to the season, Ballack headed to a major international tournament with the hopes of a nation upon his shoulders.

Captain of a young German side which had impressed in finishing third during a home World Cup two years earlier, expectations had increased that the national side could deliver major silverware.

Ballack again played an influential role in his side’s success, scoring the vital winner against Austria to secure Germany’s place in the knock-out stages before again finding the net in the quarter-final victory over Portugal in Basel.

Joachin Löw’s side advanced to the final where Ballack had a second showpiece opportunity to lift silverware with the national team, only to see his hopes dashed as Fernando Torres scored the only goal of the game for Spain to start an era of international dominance.

It proved to be Ballack’s final major tournament.

After finishing his Chelsea career on the back of a domestic double under Carlo Ancelotti, Ballack returned to his native Germany and former club Bayer Leverkusen, though it proved an unhappy reunion.

Struggling for both form and fitness, he struggled to make an impact and was marginalised after a fall-out with coach Robin Dutt. He did, however, manage to add one further runner-up medal to his collection, Leverkusen finishing behind Jurgen Klopp’s Borussia Dortmund during the 2011 Bundesliga.

Ballack retired the following summer and his story is indeed one of near misses, the narrative of major failures difficult to shift following his many final defeats.

That should, however, not detract from one of the finest players of his generation and an inspirational figurehead for German football during a transitional period in the country’s proud sporting history.