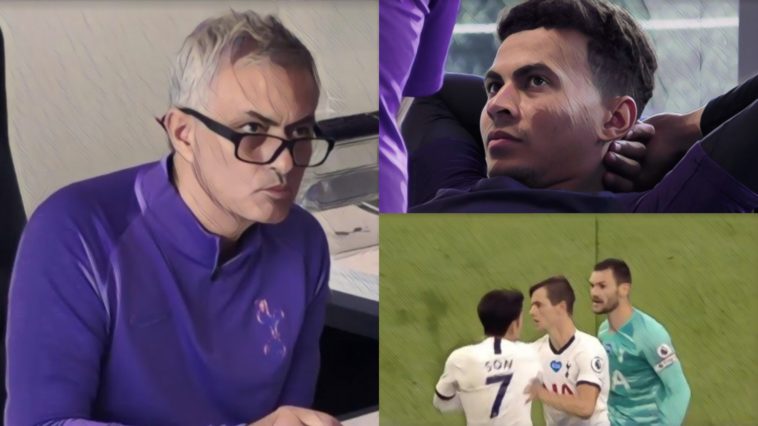 Amazon Prime Video’s fly-on-the-wall documentary following Tottenham Hotspur throughout the 2019/20 season is aptly named All or Nothing, because it promises so much, but fails to deliver on its promises.

Between managerial changes, internal bust-ups, transfer sagas and players rowing with fans, drama seemed to follow Spurs around like a bad smell. And yet this felt like a distinctly watered down version of events. Only on a few occasions do we feel like we are getting a proper sneak peak, a view into something we’re not meant to see.

It also becomes very apparent that this is the Jose Mourinho show. Mauricio Pochettino features for all of half of the first episode, if even, despite the fact he was in charge up until November. The Argentine’s successor is in his element here, taking to the peering cameras with far greater enthusiasm.

Mourinho’s constant need to transmit a carefully constructed image of himself to the public means we never truly know whether we are seeing the real version of himself or just a caricature that is now impossible to separate from the person.

Nonetheless, it was still perfectly cromulent watch that will keep football fans occupied for a few hours, if nothing else. Just don’t expect much from it.

The best moments from the All or Nothing: Spurs documentary:

One clip that was doing the rounds online just before the documentary was released was that of Jose Mourinho working in his office while the television is on in the background. We can hear football pundits discussing his recent appointment as Spurs manager, before he gets sick of listening to their criticisms and says “f*ck off” before turning the telly off.

We're not saying we've done nothing else this morning, but we may have watched this 45 times already. One more sure… pic.twitter.com/QkVh9ETObF

Firstly, the TV isn’t even on when he walks up to it. Secondly, none of the voices are recognisable personalities that you would often hear on Sky Sports, the BBC or on mainstream radio. It sounds just like a group of voice actors reading from a script.

My best guess is that this was filmed as a trailer, but was added into the final cut anyway. Some will find it amusing, but it’s not great to start out a football documentary, which was always going to be accused of selective editing, with such a transparently bogus scene in the opening episode.

Mourinho having a dig at Dele Alli for being “lazy”

In his very first session as Spurs manager, Mourinho cajoles Dele Alli for his laziness in training. 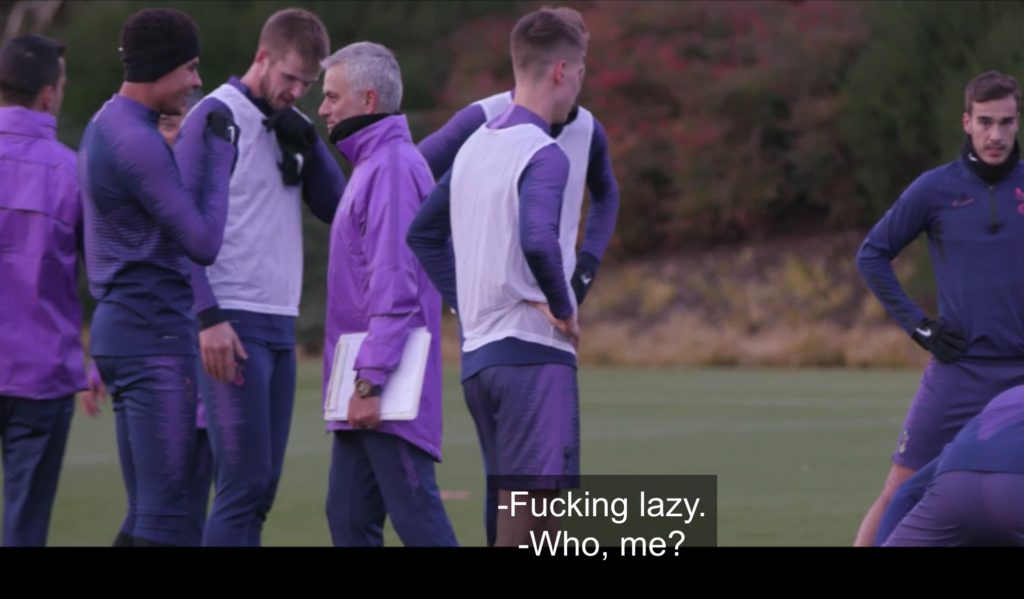 In a team meeting that same week, Mourinho says “I understood already that you are a f*cking lazy guy in training.” We’re not convinced it had the desired effect.

That said, there was a very revealing admission from Mourinho soon after. In a discussion with Daniel Levy about Alli’s decline in recent years, the former Manchester United manager says he only got one piece of advice from the legendary Alex Ferguson during his time there.

“Sir Alex Ferguson gave me only one piece of advice in two-and-a-half years: buy Dele Alli,” he reveals to the delight of a beaming Levy.

“‘That guy, that mentality, the way he plays, the aggression he has in his mind, this guy is a Manchester United player. Buy that guy’,” Mourinho quotes Ferguson as saying. “And he has an eye for players. But he is not a good trainer, we need to find the right motivation for the guy.”

Aurier ruins the gaffer’s runners on day one

If there was one footballer in the Tottenham team you would expect to spill a drink over his manager’s trainers due to miscontrolling a football, nine times out of ten you would say Serge Aurier. And you would be right.

The C U Next Tuesday team talk

A major theme of Mourinho’s time in charge of Spurs thus far has been his mission to turn the squad into a group of “bad guys”. After all, nice guys finish last, right?

An uncensored clip of one of Mourinho’s team meetings was leaked online ahead of the release, but it was seen by many before inevitably being taken down. In the clip the Portuguese manager could be seen encouraging his players to be “c*nts” over and over.

It’s exactly what you would expect from a Mourinho team talk, even if he is probably hamming it up a little bit for the cameras.

There was an extremely humbling moment for the French full-back when Mourinho called him a “shit marker” who is “capable of giving away a shit penalty with VAR” before a big Champions League match.

Ouch. He’s not wrong, though.

One thing we learned about the England midfielder is that he loves to strike up random conversations while on the physio table. One such conversation that got everyone debating on Twitter was his question about tooth brushing routines.

Alli was surprised to learn that his pattern – wet the brush, toothpaste on, then more water – was different to everyone else’s.

Dele Alli was questioning life as he knows it after that toothpaste conversation 🤣#AllorNothingSpurs pic.twitter.com/XBL2Dtlz9W

In his first personal meeting with Harry Kane, Mourinho lays out his vision for turning the striker into one of the game’s best players, and how he can help him do that. All pretty standard fare for a new player-manager interaction, only Mourinho gives off massive Ron Burgundy ‘I’m kind of a big deal’ vibes while doing so.

“The world has an incredible respect for English football, but they still think that the movie stars of football belong to other places. And I think we have to build also your status in that direction,” he tells Kane.

“My profile, I am a little bit that as a coach. The reality is that my dimension is universal. And by being with me, I can help you to – *poof*.” 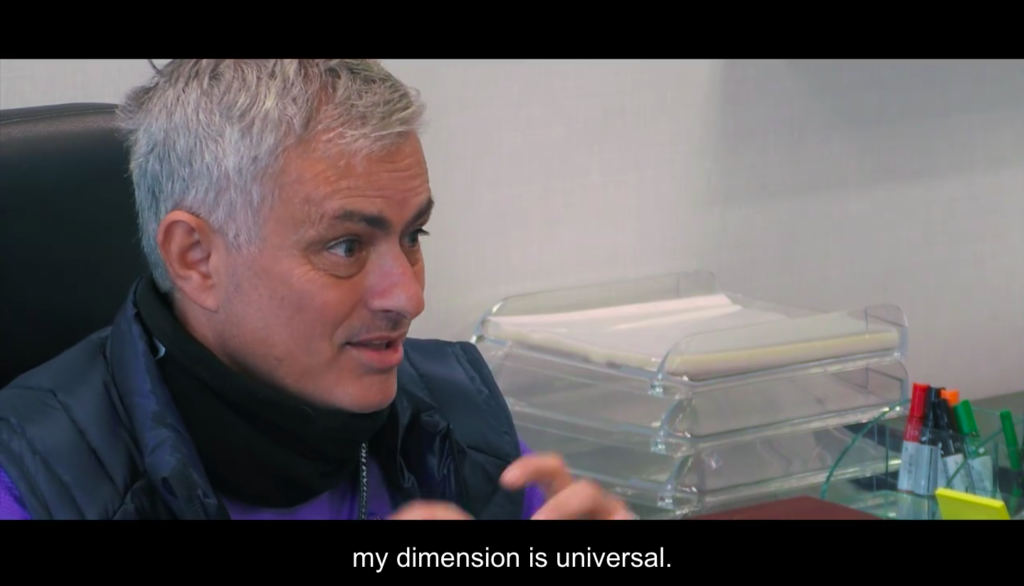 “What I don’t accept, because that is my f*cking nature, I don’t accept to be here… winning nothing. F*cking hell. but I feel that we can. You have better players than I had at Manchester United. So I think the club has a lot to explode.”

Kane calls out the team for “unacceptable” standards

Following their 2-1 defeat to Man United last December, Mourinho criticises the players for their performance in the episode aptly titled ‘No More Mr. Nice Guy’, saying their “attitude was not good enough”.

Kane chips in with his own take on the team’s play that season, admonishing his teammates for not taking enough responsibility. “For me it’s all season, this,” Kane said. “I don’t understand, I don’t know if it is laziness, or just trying to shift blame to other people but it has happened every game and I don’t understand how.

Why David Ginola was a scorer of great goals, but not a great goalscorer

Football often inspires an illogical, inexplicable level of fandom among supporters, as evidenced by the man who has travelled all the way from South Korea to meet his hero, Heung-min Son.

He is seen outside the club’s training base in Enfield with a Son Spurs jersey hanging beside him, bowing and waving at every car that drives by. We know that Son is a national icon in his home country, but flying 8000 miles for a chance to meet him is wild. As far as we know, he did not get to meet his hero. 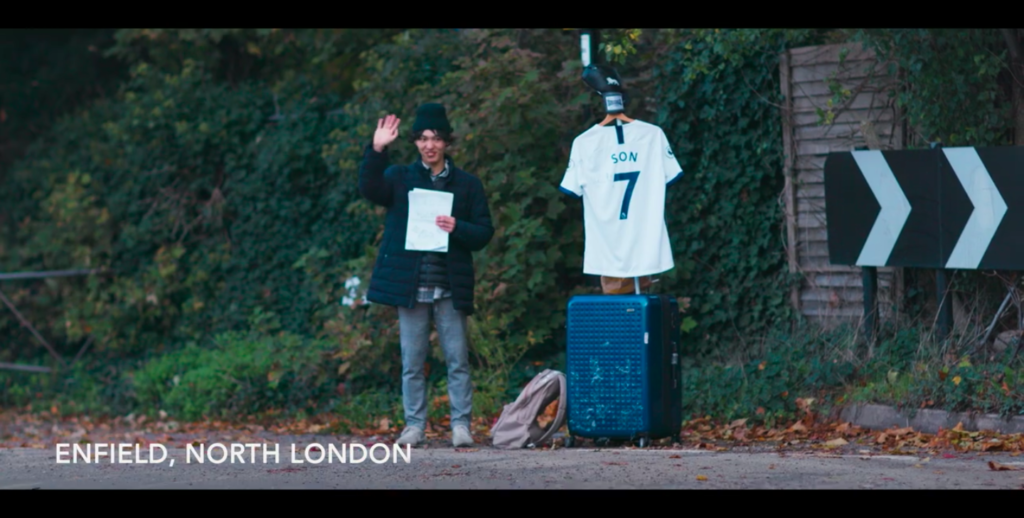 A man never afraid to speak his mind, Danny Rose expressed his displeasure at a lack of game time in a now infamous meeting with Mourinho. The full-back wants to know what the manager’s “problem” is, to which Mourinho asks what he means by that.

“You know exactly what I mean, how I’m being treated,” the 30-year-old said. “I was very excited when you came as manager, but if you don’t want me to play, I’d rather you just tell me now, and I’ll stay at home, and I’ll train at home.

“I respect what you’re saying in that I didn’t play well against Liverpool, which is true. I play one game every four weeks. Do you want me to be man of the match and give my best performance when I play one game and then I don’t play again for three or four weeks?

Unsurprisingly, Rose left the club in a loan deal to Newcastle that January. He is no longer a part of Mourinho’s plans, having not received a jersey number despite being at the club for 13 years.

Following defeat to Wolves, Dele Alli goes on the kind of rant which became a regular occurrence during the 2019/20 season. Sick of hearing the familiar complaints, Eric Dier bites back at his teammate, whom he calls a “spoiled kid”.

“Del, why do you keep saying these comments?” Dier asks. “Put a name on it at least. You keep on sitting there, ‘ah shit goals, ah same problems’.” It results in a tense back and forth between the two players while the rest of the dressing room looks on awkwardly.

Mourinho sits there patiently, allowing the two to get it out of their system until it peters out. The scene was probably music to his ears, as one of his principal methods of management is to purposely create tension in a squad to somehow motivate them to perform better.

We see the two lads in better form later on in the episode, when Alli offers Dier a Haribo while they play video games.

Having coached the French midfielder for several years, Mourinho knows all about Paul Pogba’s strengths and weaknesses. Anticipating that Pogba will make a second-half appearance in the first match of the restart, he warns his players what to expect.

“So I can imagine from a position like that,” Mourinho says while pointing to the right midfield area of the pitch on his tactics board, “to get the ball and to make a beautiful pass for (Marcus) Rashford to go. Pogba will improve the quality of passing, so we need to press him and we need to control what is far from him.”

Lo and behold, Pogba comes on and plays a ridiculous 40 yard pass on the volley to Rashford in the exact space Mourinho presaged. Despite his powers of prediction, the producers made absolutely no reference to the pass in the episode, which feels like a wasted opportunity.

Behind the scenes of Lloris and Son’s big kerfuffle

When Spurs faced Everton after the restart, Hugo Lloris and Son had a furious spat at half-time that continued down the tunnel and into the dressing room. Son had failed to track back after Spurs lost the ball, resulting in a Richarlison shot on goal.

For the first time ever we got to see what happened during the interval, as the two men continued to bite at each other and had to be separated by teammates and staff.

In his half-time team talk, Mourinho spins the incident to show how far the side have come in recent weeks. “If you take it in the right way, you become stronger,” he tells the squad.

“Probably this would be something that wouldn’t happen one month, two months, one year or two years ago. it happened because now you demand more from each other, you feel more the responsibility where you have to give more.”

He concludes: “If you take it in a positive way, for me, it’s perfect.”