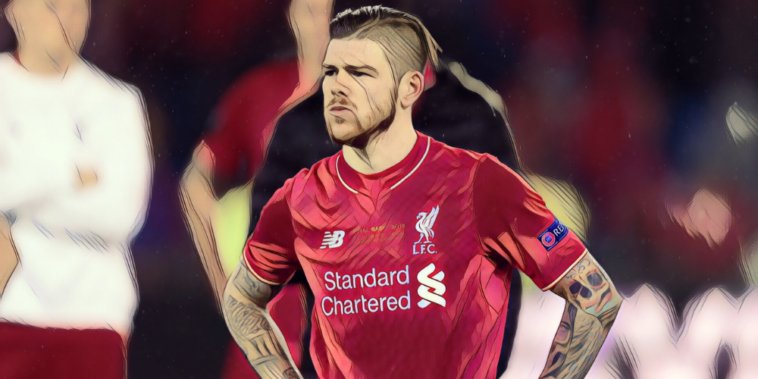 Alberto Moreno has opened up on ‘getting the blame’ for Liverpool’s Europa League final defeat to Sevilla, as the left-back prepares for another final in the competition.

Moreno spent five seasons with Liverpool and endured a mixed period on Merseyside, the full-back’s inconsistent form attracting criticism including following his showing in the 2016 Europa League final.

The Spaniard was targeted by critics as the Reds lost 3-1 to Sevilla despite leading at half-time, and Moreno has opened up on that experience as he prepares to face Manchester United in tomorrow’s final with Villarreal.

“I still don’t understand the amount of criticism,” he told the Guardian. “On the first goal they nutmegged me, sure. But I’m a defender. Players get past Sergio Ramos, the best centre-back in the world. Why can’t it happen to me?

“To this day I don’t understand why I got so, so much criticism when the whole team didn’t play well. The finger was pointed at one player and I don’t think that’s OK. People blame you. Only you. It was like I lost the final. It’s hard. You can’t get it out of your head.

Moreno failed to truly recover from that performance and found himself on the sidelines for much of the following campaign, with Liverpool utilising James Milner as an auxiliary left-back in his place.

The left-back enjoyed a brief return to the side and form the following season, though an ankle injury handed a chance to summer signing Andy Robertson who has since remained a fixture in the Reds’ side.

Moreno has opened up on his treatment by Jurgen Klopp and whilst admitting he had a ‘perfect’ relationship with the Liverpool manager, has suggested the German could have shown more ‘faith’ in him following a difficult period.

“My relationship with Klopp was perfect and, with Unai [Emery], he’s the best coach I’ve ever had,” he said. “He knows how to squeeze the best out of you, what to say at any moment, how to get the group to go out and ‘eat’ the opposition. But protecting me would have meant keeping faith, giving me chances which didn’t happen. I don’t know if that was Klopp or the club.

“After the final against Sevilla, James Milner played left-back. If the coach puts a right-footed central midfielder there, then he doesn’t want me. But the following year pre-season started and he played me. I got back in the Spain squad after three years and just then, I injured my ankle. That was when Andy Robertson had his chance. He played at such a high level and that was it; I didn’t get any more chances.”

Moreno could feature in his third Europa League final against Manchester United tomorrow evening, having won the competition under Unai Emery at Sevilla during the 2013/14 season.

Emery won a hat-trick of Europa League titles with the Spanish side before reaching another showpiece during his time in charge of Arsenal, and will now look to secure his fourth winners’ medal in Villarreal’s first-ever European final.

Moreno has discussed working alongside his compatriot once again and says the Villarreal manager’s success is down to the detailed preparation he conducts.

“Time flies but Emery’s the same,” Moreno said. “Yep [the videos are still as long], but it’s better that way. The players talk about it: ‘Pfff, another video.’ But you play well because you’ve spent an hour watching your opponents. Emery knows everything. By the time we’ve finished preparing, we’ll know how many kids Cavani and Pogba have got.

“The way the team’s playing is testimony to his work. And he’s also special because he gave me my debut and a run in the team when I was just a kid.”