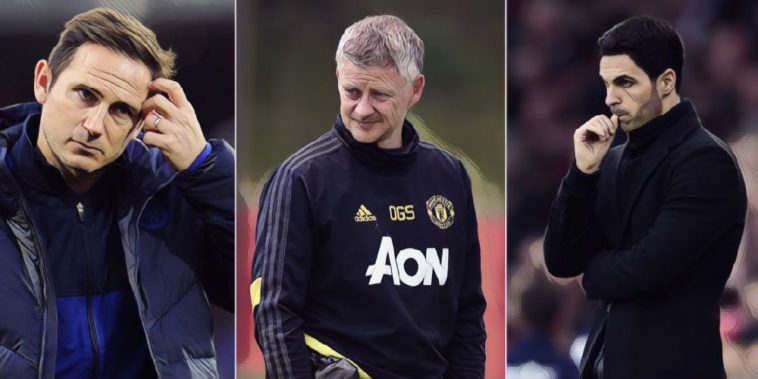 Premier League football makes its return tomorrow evening with the anticipation building ahead of the division’s behind-closed-doors restart.

English football’s top tier is set to be a unique and unprecedented spectacle in the current circumstances but there remains plenty of football to be played before the end of the campaign, with a whole host of intriguing sub-plots ahead of its long-awaited return.

Ahead of the big kick-off, we’ve decided to assess the situations at each of the division’s leading sides, here is one question for each top six manager ahead of the Premier League‘s restart:

The league leaders will arguably be the side most relishing the resumption of the season, Liverpool sitting on the brink of a first league title in three decades ahead of their Merseyside derby clash with Everton on Sunday.

Jurgen Klopp’s side could wrap up the title with victory in that fixture should other results go in their favour, but even if their title celebrations are delayed slightly they remain inevitable given their huge advantage at the top.

Already out of both the FA Cup and Champions League, the club’s final fixtures look set to be a platform for Klopp to experiment or fine tune his side ahead of a title defence next season. Having withdrawn in their pursuit of Timo Werner, Liverpool are not expected to spend this summer and Klopp must now decide which players can step-up next term.

Naby Keita will hope for increased involvement after returning to full fitness, the midfielder having suffered with a succession of injury problems and yet to deliver on his potential since a big-money move from RB Leipzig two years ago.

Mid-season signing Takumi Minamino is likely to be handed minutes as he continues his adaptation to English football, whilst Xherdan Shaqiri will want to stake his claim for a Liverpool future in the run-in, the Switzerland international having been tipped to leave prior to the coronavirus outbreak.

Opportunity could also be handed to teenage talent Curtis Jones, the academy graduate being tipped to replace Adam Lallana in Klopp’s first-team plans with the experienced midfielder set to depart on a free transfer this summer.

The Premier League champion’s defence of their crown is all but over with City trailing Liverpool by 25-points ahead of the division’s restart, whilst their second-placed position means they are unlikely to be dragged into a fight for a top four finish.

Pep Guardiola’s side do, however, remain in contention for both the FA Cup and Champions League, and Europe looks set to be the club’s main priority following their disappointing league campaign.

UEFA are set to announce plans to conclude the current Champions League season in a mini-tournament format held in Lisbon, with the quarter-finals and semi-finals set to be played as one-legged contests.

No announcement has yet been made on outstanding last-16 ties with City currently leading Real Madrid 2-1 on aggregate following the first leg in Spain, but the club will be quietly confident of finally competing for Europe’s biggest prize.

The relative lack of importance for the club’s remaining league fixtures will allow Guardiola to experiment and plan ahead of their Champions League quest, the two-time winner determined to finally end City’s wait for a maiden crown.

Chelsea have been amongst the Premier League’s most talked about clubs during the suspension of the campaign with the west London outfit laying down a statement of intent in the transfer market, the confirmed capture of Hakim Ziyech followed by the announcement a deal has been agreed for RB Leipzig forward Timo Werner.

Those exciting arrivals will be heading to Stamford Bridge amid the expectation of playing Champions League football next season, and Lampard’s priority must be ensuring the club do not slip from their current position within the top four.

Lampard has widely been praised for his work during a promising debut season with the Blues, though their season has not been without indifferent and inconsistent performances. No side in the division’s top seven has conceded more goals than Chelsea, who must eradicate their defensive errors if they are to avoid a late season slump.

Expectations were minimal ahead of the campaign following the club’s transfer-ban and the sale of Eden Hazard, but the Blues have capitalised on poor seasons from many of their traditional top six rivals. With just nine games of the league season remaining, it’s down to Lampard to ensure a second successive Champions League qualification as the big-spending Blues look to attract more marquee names.

Manchester United – Can Pogba and Fernandes play together?

Manchester United saw an 11-game unbeaten run halted by the season’s suspension, and the club will hope to pick up where they left off ahead of their trip to face Tottenham on Friday night.

That fixture is followed by a clash against Europe-chasing Sheffield United, in two fixtures which could prove crucial to the Red Devils’ hopes of securing Champions League football. A return to Europe’s elite may prove crucial in attracting the club’s leading transfer targets, most notably their well-documented pursuit of Borussia Dortmund’s Jadon Sancho.

Continuing the club’s momentum will be pivotal as Ole Gunnar Solskjaer seeks to secure a top four finish, though his hopes will be boosted by the return from injury of both Marcus Rashford and Paul Pogba.

The latter’s return is particularly of note with the midfielder having made just eight appearances in all competitions so far this season, whilst his absence through injury has seen mid-season signing Bruno Fernandes thrive as the club’s creative fulcrum.

Much has been discussed on how the two playmakers – each taking up similar positions and often demanding possession – will fit into the same midfield, and Solskjaer’s ability to simultaneously extract the best from his leading talents will go a long way to ensuring a successful end to the campaign.

Tottenham head into the Premier League’s restart in infinitely better shape than they were in three months ago, with Harry Kane and Son Heung-Min fully fit and ready to add potency to the club’s attack.

Jose Mourinho’s side were winless in six games in all competitions prior to the break and had crashed out of both the FA Cup and Champions League, whilst their woeful form leaves Spurs facing an uphill battle to secure a top four finish and a return to Europe’s elite.

Currently seven points adrift of fourth-placed Chelsea, Mourinho’s side can ill-afford any slip-ups between now and the end of the campaign and face fellow contenders Manchester United and Sheffield United in their first three fixtures.

Mourinho will need leading scorer Kane and Son to hit the ground running if they are to close the gap on the sides above them, with the two players having scored 33 goals between them in all competitions this season.

Spurs looked lacklustre during the pair’s absence through hamstring and arm injuries respectively, but the north London side will be hopeful of a late charge for the top four with a fully-fit forward line.

Arsenal’s season of struggle has shown signs of positivity following the appointment of Mikel Arteta in December, the club unbeaten in the Premier League since the turn of the New Year despite currently languishing in ninth.

The Gunners travel to face champions Manchester City – who have won the last six meetings between the sides in all competitions – in their first fixture back and defeat will likely all but end the club’s already faint hopes of a top four finish.

Much of the positivity of Arteta’s initial impact has been overshadowed by the continued speculation surrounding the future of captain Pierre-Emerick Aubameyang, however, the club’s best player and leading scorer about to enter the final year of his contract at the Emirates.

Those early shoots of growth will need to blossom over the remaining fixtures if the north London side are to convince the Gabon international to remain at the club, the Gunners hierarchy facing the dilemma of whether to cash-in this summer or risk losing the 30-year-old for nothing in 2021.

Only Mohamed Salah has scored more goals than the forward since his arrival in English football two-and-a-half years ago, with the star just two goals behind Leicester’s Jamie Vardy in the race to secure a second successive Golden Boot.

Keeping Aubameyang is the club’s best route back into the top four and missing out on Europe to concentrate on a Champions League push next season may prove beneficial, even if that may be an unpopular opinion amongst supporters.