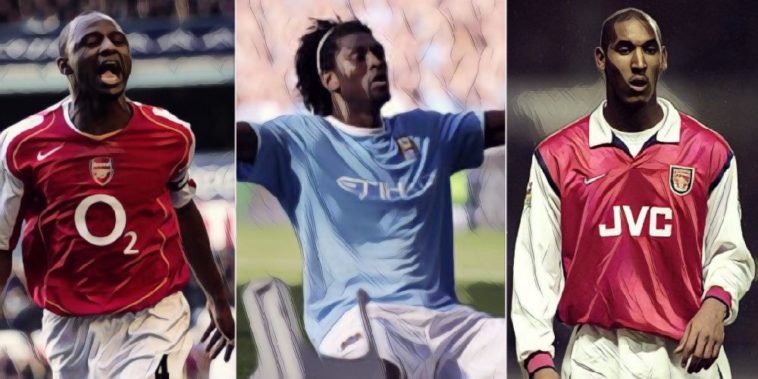 Manchester City face Arsenal tonight as the Premier League prepares to make its return following a 100-day absence, the division restarting with a fascinating battle between two of the league’s ‘big six’ at the Etihad.

The two sides have won seven Premier League titles between them since the division’s inception and played host to a wealth of leading talents, with some fine footballers have also adorned the colours of both sides.

Ahead of tonight’s clash we’ve decided to look at some of the stellar names to have represented both clubs, here are five of the best players to have played for Arsenal and Manchester City in the Premier League era:

No list of the Premier League’s greatest ever midfielders would be complete without the presence of Patrick Vieira, the Frenchman a formidable competitor during a glittering career at the height of English football.

Vieira’s time in the division is most associated with a nine-year spell in north London, arriving in the mid-nineties and playing a fundamental role in the early – and most memorable – successes of the Arsene Wenger era at Arsenal.

Vieira simply had all the attributes required of a complete Premier League midfield player, a technically accomplished powerhouse with a fierce competitive edge and will to win.

He played a hugely influential role in each of the Gunners’ three title triumphs, winning domestic doubles in 1998 and 2002, before captaining the ‘Invincibles’ side during their famed unbeaten season in 2003/04.

Arriving as a relative unknown, he became the heartbeat and figurehead of Arsenal’s greatest Premier League teams, Vieira winning six major honours during his time with the club before departing for Juventus in 2005.

He returned to the Premier League and finished his career with a brief spell at Manchester City, making 46 appearances and scoring six goals in all competitions.

Another French player who would make their name in the colours of Arsenal, Nicolas Anelka was plucked from obscurity by Arsene Wenger before establishing himself as one of the most exciting young talents in English football.

The £500,000 fee to prise the teenager away from Paris Saint-German would prove one of the club’s best bargain buys, Anelka making an instant impression as he scored nine goals in all competitions during the Gunners’ double-winning campaign in 1997/98.

The following year saw the teenage forward thrive further, being named as the PFA Young Player of the Year after scoring 17 league goals to narrowly miss out on the Premier League’s Golden Boot.

Quick, powerful and with a nerveless finishing ability, hopes that Anelka would fire the club to further success proved to be short-lived, however, the forward leaving in acrimonious circumstances that summer to join Real Madrid in a £22.3m deal.

That move failed to work out and after short stints at PSG and Liverpool, he moved to Manchester City in a club-record deal. Anelka’s signing represented somewhat of a coup of a City side who had just returned to the Premier League, and the Frenchman would enjoy a hugely productive stint in the blue half of Manchester.

He scored 45 goals in just 103 appearances during a two-and-a-half-year spell at City before continuing his nomadic career, later having spells at the likes of Fenerbahce, Bolton and Chelsea, winning a Premier League and FA Cup double and a Golden Boot during his time at Stamford Bridge.

Toure played alongside the aforementioned Vieira during Arsenal’s historic ‘Invincibles’ campaign, the Ivorian making 326 appearances for the Gunners in all competitions and establishing himself as a formidable defender.

The centre-back reportedly impressed Arsene Wenger by hilariously slide-tackling the Frenchman during his trial period in north London, though it was that determination and competitive edge that saw Toure thrive at the very highest level.

Toure’s emergence helped fill the void left by the retirements of the defensive greats Wenger inherited at Arsenal, forming part of the side which kept a record 10 successive clean sheets to reach the Champions League final in 2006.

The powerful defender’s displays later attracted the attention of newly rich Manchester City, who made the Ivory Coast international their latest marquee arrival in the summer of 2009, Toure linking up with brother Yaya at the Etihad.

Toure spent four seasons with the club and formed a key part of the side which won a maiden Premier League title during the 2011/12 season, making 102 appearances and scoring three goals in all competitions before later spells at Liverpool and Celtic.

Arsenal’s period of transition, coupled with the emergence of billionaire-backed Manchester City as a major force, saw several players swap north London for the North West, with Samir Nasri amongst those to travel the well-trodden path.

The French playmaker arrived in the Premier League from Marseille and quickly established himself as an important player in a new-look Arsenal side, Nasri’s technique and creativity flourishing in an attack-minded side alongside the likes of Cesc Fabregas and Robin van Persie.

Nasri’s performances saw the midfielder score 15 goals in all competitions to be named in the PFA Team of the Year during the 2010/11 season, but the Gunners’ inability to compete for major honours saw the France international leave in search of silverware.

Ambitious Manchester City secured his signing in a £24m deal, with Nasri souring his relationship with the Arsenal supporters further with a series of ill-advised parting comments, including criticising the Gunners’ support and the clubs inability to compete for the game’s biggest prizes.

The move to Manchester would prove vindicated as the playmaker helped City to two Premier League titles and the League Cup, scoring 27 goals in 176 appearances in all competitions.

Nasri’s best moments were fleeting, however, and despite glimpses of genius in a City shirt his career at the Etihad ultimately fizzled out, a talented but temperamental player who perhaps failed to reach his full potential.

Emmanuel Adebayor will forever be associated with his defection from Arsenal to Manchester City, the forward seemingly doing all he could to ensure he will always be a wholly unpopular player in north London.

The Togo international signed for Arsenal from Monaco and after a period of adaptation began to thrive in England’s top tier, filling the void left by the departure of Thierry Henry to Barcelona with a prolific period as the Gunners’ focal point.

His finest hour came with a 30-goal campaign during the 2007/08 season, the forward’s performances seeing him finish as runner-up for the Golden Boot and named as African Player of the Year.

Another impressive season followed before his controversial move to Manchester, Adebayor signing for the ambitious Etihad side in a £25m deal. His spell with the club began brightly as he scored in his first four fixtures, including a goal against his former side that prompted a memorable celebration in front of the travelling Arsenal support.

He scored 19 times in 45 appearances for City but a dip in form – alongside increased competition for places – saw him deemed surplus to requirements, spending a short spell on loan at Real Madrid before further damaging his reputation with Arsenal fans by signing for north London rivals Tottenham.