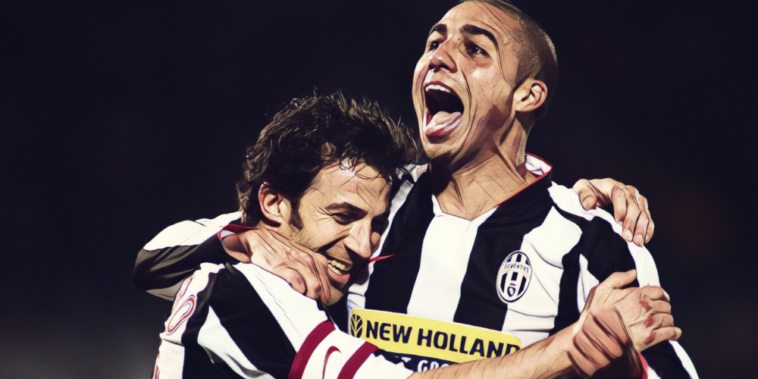 Criticism, injury and relegation – iconic Juventus duo Alessandro Del Piero and David Trezeguet stuck it out together through thick and thin.

At face value the nickname was flattering, but the eccentric Agnelli – a descendent of the founders of the Fiat motor company – often spoke in riddles.

The industrialist later explained that the club’s talisman, Roberto Baggio, played with the masterful artistry of the renowned painter Giotto – while Del Piero was simply Baggio’s progeny, a student of the ‘The Divine Ponytail’s’ craft.

Three years later, Del Piero proved his worth to Agnelli by scoring a career high total of 32 goals in all competitions. In doing so, the 1998 Italian Footballer of The Year fired La Vecchia Signora to their second successive scudetto.

Disaster struck shortly after, with Del Piero rupturing the anterior and posterior ligaments in his left knee. He spent the remainder of the 1998/99 season on the treatment table and, over the following seasons, struggled to reproduce his stellar form.

Of course, his reproval in the media didn’t help – especially when it came from within his own camp.

In a 2000 interview, an increasingly impatient Agnelli poked fun at Del Piero, derisively naming him ‘Godot’ – a reference to Samuel Beckett’s play, where an expected character (Godot) never shows up.

As Del Piero misfired, Juve were heavily outscored by 2000/01 Serie A champions Lazio, prompting manager Carlo Ancelotti to bolster his attacking options. With 62 goals to his name over the previous three campaigns, Monaco’s David Trezeguet was top of his shopping list.

The lure of the famous black and white stripes and the opportunity to follow in the footsteps of Michel Platini, Zinedine Zidane and confidante Thierry Henry – it was a dream move for Trezeguet.

However, after an ironic twist of fate, the World Cup winner arrived in Italy to a contemptuous reception.

Having sealed his move to the Turinese giants earlier that summer, Trezeguet went on to break Italian hearts, scoring the decisive golden goal against the Azzuri in the Euro 2000 final.

Trezeguet began his debut season on the bench, with Ancelotti favouring the established strike partnership of Del Piero and Filippo Inzaghi. While the Frenchman adapted to his new life off the pitch, Del Piero’s torrid time on it continued.

Hampered by a lack of self confidence, the former prodigy simply couldn’t rekindle his spark. In February, with the Bianconeri struggling to keep pace with their title rivals, Del Piero had a watershed moment.

Days after the death of his father Gino, a grieving Del Piero harnessed his anguish and produced an exquisite moment of virtuosity. His late winner against Bari – a mazy solo run capped by a delicate chipped finish – was followed by a bittersweet outpouring of emotion.

In the final weeks of the season, the reinvigorated Del Piero forged a potent relationship with Trezeguet, as a resurgent Juve finished runners up to Roma by a narrow two-point margin. When Marcelo Lippi took the helm that summer, he immediately installed Del Piero as Juve’s new ‘capitano’.

The Del Piero and Trezeguet partnership flourished under Lippi, with the pair cultivating a close friendship. As Trezeguet would later remark, “He [Del Piero] was a serious professional and a unique player – we understood each other in an instant.”

To the casual Gazzetta Football Italia viewer the duo may have embodied the classic ‘big man, little man’ combination – but their partnership was far more complex.

Although the 6’2” Trezeguet was excellent in the air, his deft touch and ability to score with both feet made him a versatile threat. Similarly, Del Piero was lauded for his technical proficiency and creativity – and yet he was deceptively strong for a man of his stature.

An enthralling end to the 2001/02 Serie A campaign saw Lippi’s men exact their revenge over Roma, pipping the Giallorossi to the scudetto by one point. Serie A Footballer of the Year ‘Trezegol’ netted 24 times – a tally that saw the Frenchman share the Capocannoniere with Piacenza’s Dario Hübner.

Sadly, that season would prove to be Del Piero and Trezeguet’s last uninterrupted campaign together for years.

Trezeguet missed the majority of the following season with tendinitis, but returned to play a bit part in the Bianconeri’s run to the 2003 Champions League final (which they lost to rivals AC Milan). The following season, the duo’s fortunes were reversed, with Del Piero enduring another injury ravaged campaign.

When capitano returned to fitness he struggled to hold down a place under new manager Fabio Capello. With summer arrival Zlatan Ibrahimović ahead of him in the pecking order, the crestfallen Del Piero alluded to a move abroad, saying, “one thing I would never do is play for another Italian side.”

A gripping title race ensued that season, with Juve and Milan neck and neck throughout. When the sides met in May, Capello reunited the tried and tested Del Piero-Trezeguet partnership to devastating effect.

With one of the iconic Serie A assists, Del Piero launched himself into the air and executed an acrobatic bicycle kick from the corner of the Milan box. Finding his strike partner expertly, the onrushing Trezeguet duly headed home the winner, silencing the partisan San Siro crowd.

That goal was key to Juve’s 2004/05 Serie A triumph – a title they retained the following campaign. With four scudetti in five seasons, The Old Lady appeared to be ushering in an era of dominance reminiscent of club legend Giovanni Trapattoni’s first trophy-laden stint at the club.

However, all was not as it seemed.

In the summer of 2006 the Calciopoli scandal exploded. Along with Lazio, Milan, Fiorentina and Reggina, Juve were implicated in a shocking match-fixing scandal that saw their two previous scudetti revoked and the illustrious club relegated to Serie B.

A mass exodus of players ensued, with Fabio Cannavaro, Ibrahimović, Lilian Thuram and Patrick Vieira among the many to leave for pastures new.

Among the luminaries to stay were Pavel Nedved, Gianluigi Buffon, Giorgio Chiellini and captain Del Piero. Pledging that he would return La Madama to glory, Del Piero explained that, “the Agnelli family deserve this, as do the fans.” Trezeguet stayed too, firing the club back into the top flight at the first time of asking.

Del Piero opened the scoring against Sampdoria early on, before winning a penalty just minutes later. In a classy gesture, Juve’s captain (and designated penalty taker) handed the ball to his dear friend Trezeguet. The grateful but sheepish Frenchman slotted the spot kick home, drawing the pair level once again.

Fittingly, Del Piero’s selfless act was later rewarded. Juve won a third penalty in the second half, which Del Piero duly converted. In doing so, he clinched his second Capocannoniere. As the back of the Blucerchiati’s net bulged, the expression on Trezeguet’s face was one of sheer delight for his pal.

Unfortunately, their playing partnership would deteriorate thereafter. As the ageing stars’ fitness began to wane, Trezeguet called an end to his time in Italy in 2010.

In a letter penned to his departing friend, Del Piero wrote:

“An average of seventeen goals a year, like the number on your jersey: it’s more than enough to prove what kind of bomber you are. But I, who played by your side, don’t need numbers. I’m honoured to have played in a pair with, no doubt, one of the world’s greatest forwards.”

Despite the many obstacles they faced along their storied paths, the pair overcame all to become a truly iconic duo.