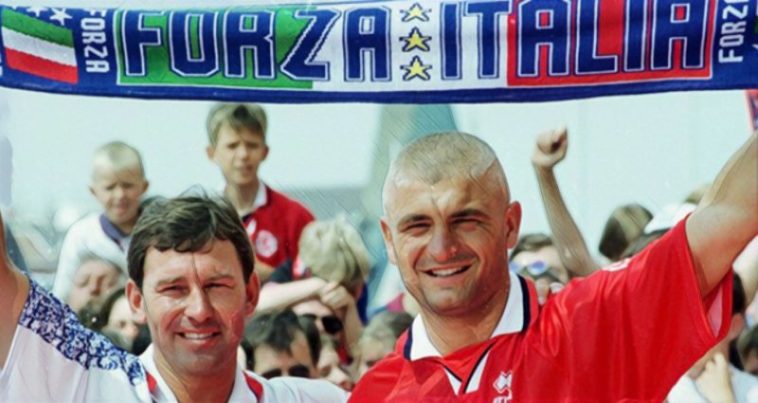 With the benefit of hindsight we can see now that the 1990s were a schizophrenic decade.

So fearful were we of the heavy symbolism and futuristic unknowns of an approaching millennium that we all went a little mad, creating a global paranoia that a computer glitch by the name of Y2K was going to end civilization as we knew it and the dread of this brave new world was so very real that we looked back for reassurance.

In fact, it could be said that towards the end of the century we collectively picked a favourite decade from those hundred years and revisited it for a good while. It was safe there. Familiar and comforting.

So it was that a Beatles tribute act from Manchester were enthusiastically embraced with the same hysteria that greeted the Fab Four while elsewhere jangly guitar music enjoyed a huge resurgence in popularity. A couple of years later we openly attempted to recreate the Swinging Sixties by proclaiming our small isle to be the epicentre of cool.

The past pulled at our sleeve, the future lurched us forward, and unsurprisingly this caused an identity crisis to take hold. We didn’t know who we were anymore nor did we have the faintest idea what awaited us. Therefore, we settled for replaying a highlights reel before the robots took over.

And from the great many brilliant, effervescent and energizing football teams that era produced no side better encapsulated this stick-or-twist duopoly than Bryan Robson’s Middlesbrough of 1996/97.

On this day in 1994, @bryanrobson was appointed #Boro’s player-manager. An iconic era in the club’s history, Robson oversaw two promotions and three cup finals and attracted the likes of Juninho, Emerson & Ravanelli to the club. Not a bad unveiling either! #OnThisBoroDay pic.twitter.com/wEhfcxQMVx

They too, like society around them, had one foot poised to step into the 21st century while the other was rooted in the mud of a bygone age. Indeed, again, with the benefit of hindsight, we can now see they resided at the absolute apex of what English football used to be and what it would soon become.

Take their dressing room, that had the shirt of Juninho – the Premier League’s most ornate and cosmopolitan playmaker – hanging just a couple of pegs away from Phil Stamp, a player of limited standing who bore an unfortunate resemblance to Butch Dingle.

Their captain was Nigel Pearson, a defender so thoroughly English that if you cut him he’d bleed the ink of a Shakespeare tragedy and just ahead of him on the pitch was Emerson, a holding midfielder not averse to a step-over, who was on a one-man mission to introduce Samba carousing to Teeside’s nightlife.

Throw in the fiery melodrama of Fabrizio Ravanelli linking with Robbie Mustoe and what we have here is a culture clash experiment that perhaps could have worked when we recall Arsene Wenger’s home-grown back five bolstering his Gallic va-va-voom, but in this instance did not. Robson’s Boro were nicknamed the ‘United Nations’. In reality, they were all over the place.

That does not mean however that they should not be loved, for that team was a wonderful mess of contradiction. According to club lore, 1997 was their greatest ever season with vast swathes of locals rejoicing an open top bus ride in May. Yet it was also a season that saw them relegated and finishing as the losing finalists in both domestic cup competitions. Their greatest campaign ultimately amounted to heartbreak and disappointment.

If that confuses, when trying to determine how this came to be, it only leads us further away from reason. Juninho that year was sensational, voted the Premier League Player of the Year courtesy of some outrageous football. Ravanelli meanwhile pulled his shirt over his head in celebration 31 times across all comps and possessing a forward so potent would usually ensure mid-table safety at the least. Yet they dropped.

When broadening this out it just gets weirder. All told, Middlesbrough scored 51 times in the league and that would normally be plenty. In fact, in the next five seasons 44 clubs would score less and maintain their top-flight status while three years after Juninho slumped to the Elland Road turf in tears Liverpool also scored 51 goals and finished fourth. Yet Boro dropped.

It must have been their defence then that contributed to their downfall, a backline largely staffed by run-of-the-mill Brits while the cultural revolution was taking place upfield? Not so. Throughout the course of 1996/97, Pearson, Steve Vickers and co conceded 60 goals, making them not especially porous by any stretch.

No, what did for Middlesbrough was being neither one thing nor another; a mish-mash of traditional conformity and continental aspiration that meant on their day, when these conflicting values synched they were utterly resplendent and a joy to watch. There simply weren’t enough of those days.

If this inconsistency was at odds with the grindstone nature of the league it did make them dangerous opposition in the knockout tournaments and this memorably came to pass two-fold. In the Coca Cola Cup they prevailed in a North-East derby and dispensed with Liverpool on route to their first ever Wembley appearance.

Martin O’Neill’s Leicester stood between Boro and their first ever piece of silverware. Sadly though the Foxes equalized in the dying embers of extra-time then struck a winner in extra-time of the replay. To lose one final late on may be regarded as a misfortune; to lose both looks like carelessness.

#OnThisDay in 1997, @EmileHeskeyUK scored in the final minute of extra-time to secure a replay in the League Cup Final against Middlesbrough 🗓 pic.twitter.com/23SZhBPUwq

Perhaps this was at the forefront of their minds when they faced Chelsea in the FA Cup final, a feat made possible thanks to the fiery Ravanelli being on fire in the preceding rounds. A week earlier Boro had succumbed to relegation and with this representing their last chance to crown their historical zenith with some glory, perhaps the prospect of being deprived again at the death was too much to bear. So instead Roberto Di Matteo scored for the Blues after 42 seconds which at the time was the quickest cup final goal ever scored and that was Boro’s season concluded, save for an Eddie Newton strike that wrapped matters up.

Back to the league, if Middlesbrough’s flawed experiment to embrace the future was central to their demise what featured just as prominently were two dates that essentially sealed their fate.

The first of these occurred just prior to Christmas when an injury crisis was compounded by an outbreak of flu and this meant Robson had 17 players unavailable for a trip to Blackburn. With just 24 hours’ notice Boro’s chief executive Keith Lamb informed the Premier League that the game would have to be postponed and the authorities – not to mention their opponents – took a dim view of the lateness of this decision, believing also that it was not conducted via the appropriate channels.

A fifty thousand pound fine followed along with the far more substantial punishment of having three points docked. It was a penalty that stood even after appeal and Boro went down in May two points adrift of safety.

The second date is easy to identify – 21 September 1996 – but to extrapolate why it’s so key it is necessary to travel back twelve months, to the arrival of a little Brazilian superstar and a transfer that stunned one and all.

Six thousand fans skived off work or bunked off school in October 1995 to welcome Juninho Paulista to the recently constructed Cellnet Stadium. To many it defied belief that the 22-year-old magician had chosen Middlesbrough over the numerous suitors chasing his signature because though the club was in fine financial fettle under the governance of chairman Steve Gibson – with promotion under former England legend Bryan Robson and a spanking new stadium all suggesting Boro were going places – this was still a time when overseas players typically headed to London when lured over by the glamour of the Premier League.

Middlesbrough, with the best will in the world, was not glamourous. It was a club embedded in an area brought to its knees by high unemployment amidst a somewhat bleak industrial landscape of steel and chemicals. So bleak in fact that it directly inspired the dystopian panorama of Blade Runner, with director Ridley Scott regularly walking home as a teenager past Teeside’s Wilton Chemical Plant.

Nine years earlier the club had brought in the receivers. They were bust and so nearly out for the count. Now they had signed a superstar.

A season of consolidation followed, with Juninho forging a decent relationship with fellow newcomer Nicky Barmby even if he was still so unaccustomed to the weather he stuffed his boots with newspaper, and then the next summer came Emerson along with a £7m purchase of Ravanelli from Juventus. The latter – an arch hit-man of international renown – really made detractors sit up and take notice.

An opening day 3-3 draw with Liverpool stands out in the memory. Indeed it remains an iconic game in the Premier League archives as the Italian bagged a hat-trick and the locals went wild over Boro’s new exciting dawn, but just as pertinent are the two subsequent home games. First West Ham were demolished 4-1 then four were put past Coventry too with Ravanelli and Juninho dove-tailing brilliantly. These were sides that would normally be viewed as rivals and now they were getting turned over with relative ease.

An impressive three points at Goodison took Boro into the heady echelons of a title challenge before Hereford were walloped in the League Cup for good measure.

Then came Arsenal at the Cellnet. On September 21st.

There is no shame in losing to the Gunners, plenty did, but that first defeat of the season sent Boro spiralling into a sustained and worrying death-spin that had them entrenched in the bottom three by Christmas. Their next win was in the corresponding fixture with Everton on Boxing Day and though a brief recovery took place in March Robson’s rom-com had turned into a horror just a few scenes in and we watched through our fingers for the duration.

To avoid defeat in their final three crucial games revealed that his mish-mashed Middlesbrough side had fight in them. To not win even one of them showed that maybe, ultimately, they just weren’t good enough.

These disparate things so strongly evoke the 1990s that just thinking of them now brings on a second flush of Y2K paranoia twenty years after its non-appearance.

And perhaps the uplifting sight of Ravanelli wheeling away in triumph, on scoring once again against Liverpool under an August sun should be included here. It was an iconic day. A meaningful one full of hope.

But then Juninho left for Atletico Madrid and though Gazza and Paul Merson joined and Boro enjoyed all manner of fun hijinks in the Championship any aspirations to immerse themselves in the elite were gone.

For the club that refused to die and dared to dream it was back to the drawing board, back to the future.