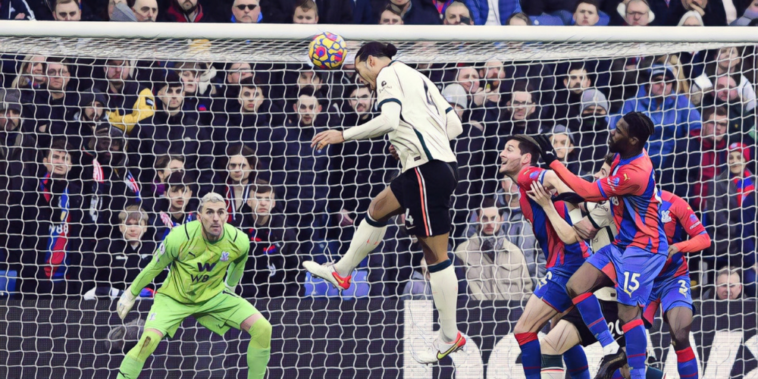 Centre-backs are crucial components of any successful Premier League side, providing the steely resistance at the heart of the defence.

Whilst the main focus for central defenders is to defend their own goal, it certainly helps when sides have centre-backs capable of influencing games at the opposite end.

Last weekend’s fixtures saw Thiago Silva and Virgil van Dijk rise highest to meet set-pieces, the defensive duo finding themselves on the scoresheet during wins for Chelsea and Liverpool.

Following their goalscoring contributions, we look at five Premier League centre-backs who are lethal at attacking set-pieces.

Each of Silva’s goals this season have come from headed efforts, his three headed goals the joint-most in the Premier League alongside Diogo Jota, Danny Welbeck and Callum Wilson.

The veteran centre-back may be into the twilight of an incredible career, but his leap and sense of timing remain as strong as ever with Silva amongst Chelsea’s leading threats at set-piece situations.

The Brazil international has also become the first Chelsea defender to score home and away against Tottenham in a Premier League season this term, his aerial ability having aided his rise fans’ favourite status at Stamford Bridge.

The question marks regarding his age, speed and ability to feature in a back four have all been answered and Silva – even at 37 – remains one of the division’s best in both boxes.

Van Dijk is a colossal presence and often the man who garners the most attention from opposition defences, with the Dutchman a fine attacker of set-piece deliveries.

The 30-year-old is the leading scorer amongst Premier League defenders since his arrival at Liverpool in January 2018 (12), despite missing the majority of last season through injury.

Virgil Van Dijk with a bullet header to put Liverpool in front! 💥 pic.twitter.com/ssIWP0r0g7

Liverpool – who lead the league for goals scored from corners this season – have also developed a healthy habit of winning when Van Dijk scores, boasting a 100% win rate from the 12 games in which the Dutch defender has found the net.

West Ham secured the signing of Kurt Zouma from Chelsea last summer, sealing a £29.8m deal for the France international.

Zouma has improved the Hammers’ defence since crossing the capital, with David Moyes’ side looking more assured with the 27-year-old at the heart of their backline.

Zouma also brings considerable aerial threat in the opposition box and netted his first goal for the Hammers with a headed effort against Liverpool in November.

The Frenchman has a huge leap and with the dead-ball ability of Aaron Cresswell and Jarrod Bowen can expect to find himself the target for set-piece deliveries over the second half of the season.

Lewis Dunk was level with Zouma for headed goals scored last season (4), with Brighton having missed the presence of the club captain at both ends during his recent absence through injury.

Dunk’s height and willingness to attack the ball has made him a regular target for the Seagulls’ set-pieces and last season’s return of five league goals was the best haul of the defender’s career to date.

The 30-year-old returned to the substitutes’ bench during the draw at Leicester last weekend and his return to fitness will be a major boost for Graham Potter and his side across the remainder of the season.

Teammate Shane Duffy also deserves a mention following his renaissance at Brighton this season, the Republic of Ireland international’s 15 headed efforts on goal ranking behind only Liverpool’s Joel Matip (19) among all centre-backs in 2021/22.

James Tarkowski has just one league goal so far this season, but the centre-back is a dominant force in the air at either end of the pitch for struggling Burnley.

Tarkowski ranks fourth in the Premier League for aerials won so far this season, whilst he is eighth overall for headed efforts on goal and fifth amongst all Premier League centre-backs.

The 29-year-old is aggressive in the air and the very best aerial threats need a genuine desire to rise highest and meet crosses from set-piece situations.

Having been a crucial cog in Burnley’s side for several seasons, his future appears to be away from the Clarets with his contract set to expire at the end of the campaign.