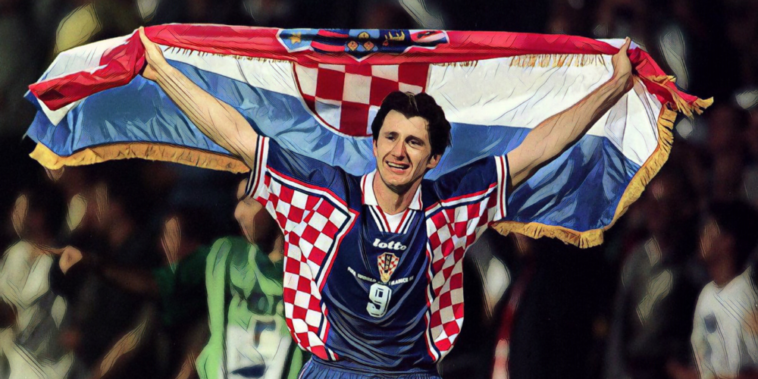 Croatia boast some of the most recognisable colours in international football, the infamous chequerboard red and white having lit up several major tournaments since their independence.

The nineties saw Croatia become a new footballing force after the breakup of Yugoslavia, with their first independent appearances in international football living long in the memory.

Luka Modric has since become the nation’s most famous footballer, a Ballon d’Or winner and one of the great midfielders of the modern era. Before his emergence, however, it was Davor Suker who became the face of a new flag flying high.

Throughout history there have been several instances of footballers becoming more synonymous with their national side than in club colours and Suker is one for who the fondest memories are often recalled in a Croatia kit.

For club and country, however, Suker’s career included goals and plenty of them.

Suker first came to prominence with a prolific period at hometown side NK Osijek, an impressive goal record and his instinctive finishing ability prompting Dinamo Zagreb to snap up his services.

He scored 34 goals in 60 league appearances across two seasons with Dinamo, whilst his performances for Yugoslavia at youth level – including winning the Silver Shoe as the u20 side finished as runners-up at the FIFA World Youth Championship – attracted interest from across Europe.

Suker’s move to a major European league came in Spain, as he signed for Sevilla in 1992. He scored twice on his first start for the club in a 2-2 draw with Real Sociedad and ended his debut campaign with nine goals in all competitions, winning the Croatian Footballer of the Year accolade for the first time.

Across the following seasons he developed into one of La Liga’s leading forwards, possessing a lethal left foot that made the art of goalscoring often appear effortless.

His second season began with a hat-trick against Albacete and Suker – now a teammate of Diego Maradona in Andalusia – continued to enhance his reputation.

Suker finished as runner-up for the Pichichi Trophy in 1993/94, his 24 league goals trailing only Barcelona’s Romario among the league’s leading scorers.

He reached 20+ goals in each of the following two campaigns in all competitions, before a star showing at that summer’s European Championship earned him a big move away from Seville.

Euro ’96 was the first tournament that Croatia competed in as an independent nation, arriving in England with somewhat of a point to prove. Suker had been prolific in qualification, finishing as the leading scorer in Europe as Croatia topped their group ahead of Italy.

He had scored twice in a crucial 2-1 win over the Azzurri in Palermo and arrived at Euro ’96 in confident mood. Croatia became the cult side the neutrals soon fell in love with, securing a late win over Turkey in their opening fixture before beating holders Denmark in convincing fashion.

Suker scored twice in the win over the Danes, including one of the tournament’s most iconic goals with a wondrous chipped finish to embarrass Peter Schmeichel.

It was a goal that perfectly captured the clinical genius of Suker. The first touch was perfect as he collected a crossfield pass in his stride, before a second nudged the ball just inside the area. Faced with the intimidating frame of the world’s best goalkeeper, his third lifted the ball up and over the helpless Schmeichel, the ball dropping gracefully into the goal as Suker wheeled away to soak in the Croatian celebrations.

Which current international striker has this in their locker? #TBT #ThrowbackThursday pic.twitter.com/R4d2knmkRh

Suker finished the tournament with three goals, second only to Alan Shearer. His third of the tournament came in the 2-1 defeat to Germany in the quarter-finals, a bruising encounter that brought an early end to Croatia’s first major tournament campaign.

Even given their elimination it was a tournament of success for both Suker and his side, the forward becoming the face of a nation reborn.

Real Madrid had taken notice of his exploits and secured his signing from divisional rivals Sevilla earlier that summer, with Suker forming a fine forward line alongside Raul and Predrag Mijatović.

He scored 29 goals in all competitions during an impressive maiden campaign in Madrid, his goals enough to help Los Blancos to the La Liga title.

Suker was less prolific over the following two campaigns, but was a valuable contributor as Real ended their long wait for success in Europe.

Not since the famous teams that had dominated the first two decades of the European Cup had Real Madrid been crowned as the continent’s finest, but a win over Juventus in Amsterdam earned the side Champions League success after a 32-year wait.

Suker had contributed four goals to the cause in Europe, though was a late substitute in the final as his second season saw him compete with Fernando Morientes for a starting spot.

Despite his reduced status at club level, he headed to the 1998 World Cup as Croatia’s leading threat. Miroslav Blažević’s side were no longer a surprise package following their performances two years earlier, but it made little difference to their hopes as the nation once again impressed.

Suker, in particular, was outstanding. He scored in group stage wins against Jamaica and Japan as Croatia progressed to the knockout rounds, before scoring the game’s only goal as Romania were beaten in the last 16.

The quarter-finals brought a rematch with Euro ’96 conquerors Germany, but an exhilarating performance saw Croatia thrash the European champions 3-0 in Lyon with Suker putting the finishing touch on the win with his fourth of the tournament.

Croatia met host nation France in the last four and took the lead through Suker’s composed finish, but their lead was cancelled out just seconds later by Lilian Thuram.

Thuram became the unlikely hero for the eventual world champions after scoring a second, as Croatia’s dreams of a final appearance ended at the Stade de France.

Suker scored again – his sixth of the tournament – as Croatia beat the Netherlands in the third-place play-off, a return which won the clinical Croat the tournament’s Golden Boot award, whilst he also claimed the Silver Ball as the second-best player at the finals behind Brazil’s Ronaldo.

That summer saw Suker shine as one of the world’s finest finishers, but what proved his zenith was also the last we witnessed of the forward as an elite talent.

He scored just five goals after falling out of favour at Real Madrid the following season, before a move to Arsenal saw him again struggle to command an automatic place.

He reached the UEFA Cup final during a single season in North London that delivered 11 goals, but missed the crucial first kick in the club’s shootout defeat to Galatasaray.

Suker moved on to short spells at West Ham and 1860 Munich, though was a shadow of the player who lit up both Spanish football and major international events at his peak.

His retirement has since seen the Croat become no stranger to controversy, but his career at the summit of the sport was goal-laden and pioneering for a new nation.

He scored 241 goals in 523 games at club level, whilst he was named as Croatia’s greatest ever footballer in 2003 after retiring with an international record of 45 goals from 69 caps – it is a landmark that remains yet to be beaten.

Cool and cold around goal, Suker’s flawless first touch and technique afforded him the half-yard he needed. When given just a glimpse of goal, the outcome was often predictable.

Suker’s left foot possessed laser-like precision and his repertoire of finishing made him one of the finest finishers of his generation, the face of a fledgling Croatia and a talent who inspired the early successes of a new football force.