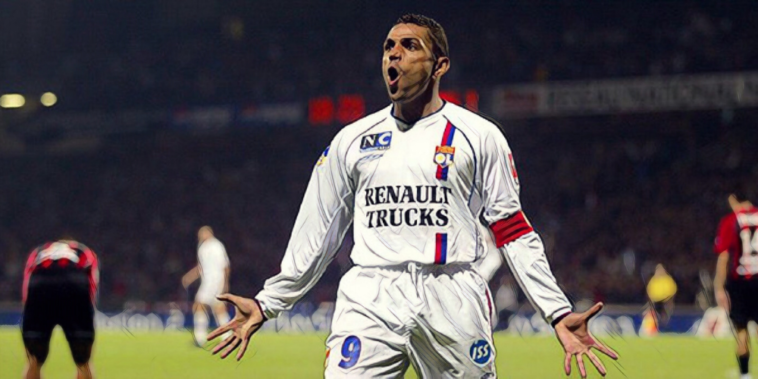 The greatest era in the history of Olympique Lyonnais came in the first decade of the new millennium, a period of unprecedented domestic dominance in France.

Lyon’s sustained success as French football’s superpower was built on a wealth of talent who passed through in the club’s colours, with arguably the catalyst for their success having been the statement signing of Sonny Anderson.

Anderson’s tale was written largely in Ligue 1, scoring goals for Marseille and Monaco before reaching the crescendo of his career at the Stade de Gerland.

Born in Goiatuba, Brazil, his early career saw Anderson fail to make an impression domestically with spells at Vasco da Gama and Guarani, before a move to Europe and Switzerland provided the first glimpse of what was to come.

He signed for Servette in a rather anonymous deal, though scored 20 league goals during an impressive debut season in which he finished as the league’s leading scorer in 1992/93.

Suitably settled in Europe and firing in goals with regularity, he crossed the border to sign for Marseille. It was a huge move for the Brazilian, given Marseille had been crowned as winners of the Champions League the previous season.

Anderson acclimatised well at the Stade Veldrome and scored 16 goals in just 20 appearances, but he was soon on the move once more following Marseille’s relegation as a result of a bribery scandal.

The goals continued to arrive following his switch to the principality, with Anderson’s second season with Monaco seeing him finish as Ligue 1’s leading scorer.

He was named as the division’s finest footballer the following season as Monaco won the title, a talented team featuring Emmanuel Petit and Thierry Henry finishing comfortably clear of nearest challengers Paris Saint-Germain.

Anderson’s standards made a noticeable impression on an emerging Henry, who later revealed his trademark high socks were in tribute to his former teammate.

“At Monaco, when I didn’t cross a good ball in front of goal for Sonny Anderson or Mickaël Madar, they kicked it high above the wire fence of La Turbie [Monaco’s training ground]. And guess who had to go and fetch the ball? David Trezeguet and me.”

Anderson scored 66 goals in just 116 appearances across three seasons with Monaco, a record which saw Barcelona spend €17 million on his services to fill a Ronaldo-shaped hole in their attack.

Anderson and Rivaldo arrived in big-money deals as Barcelona reinvested the world-record fee received for their illustrious compatriot, who had signed for Inter Milan after a stunning single season in Catalonia.

The Brazilians formed a burgeoning partnership during their first season together in tandem, scoring 38 goals between them in all competitions as Barcelona won a domestic double.

Anderson reached double figures again the following season, but the arrival of Patrick Kluivert had forced him out of the side and he was used sporadically across his two seasons at the Camp Nou.

Perhaps prematurely he was made available for transfer by Louis van Gaal and a return to Ligue 1 beckoned.

Lyon spent €18m to bring Anderson back to France – more than triple the club’s previous transfer record – and it proved a match made in heaven between the forward and an emerging footballing force.

Jean-Michel Aulas has purchased Lyon in the late eighties with the club in the second tier, but an overhaul of the infrastructure had increased hopes that the side could challenge for trophies. Successive Champions League qualifications a little more than a decade later had strengthened those ambitions.

The arrival of Anderson proved a huge hit and the first real leap on the path towards the title, with the marquee arrival scoring 28 goals in all competitions to finish as the division’s top scorer in his maiden season.

Comfortable off either foot and with the intelligence of movement to leave defenders blindsided, he often celebrated goals with a gun-slinging shooting motion – perhaps fitting given his killer instinct around the penalty area.

There was an explosiveness to his game, whilst his shooting was unerringly accurate. He would drive at defences with his pace a potent weapon, before unleashing efforts that flew straight and true beyond opposition goalkeepers.

‘Sonnygoal’, as he became christened, repeated the feat the following season to again lead Ligue 1 for goals, as Lyon edged ever closer to an elusive first title with a runners-up finish to Nantes.

Lyon’s search for success was boosted with the arrival of Juninho Pernambucano that summer, the arrival of Anderson’s creative compatriot providing the poacher with an ever-increasing supply of ammunition.

Lyon again found themselves in the race for the title, with their hopes resting on a final day winner-takes-all showdown with Lens. Second in the division heading into the crucial clash against the league leaders at the Stade de Gerland, it was win or nothing for Jacques Santini and his side.

Anderson’s decisive goal at Bordeaux in the penultimate round of fixtures had set up the occasion and whilst the club’s leading scorer failed to score against Lens, he contributed to a 3-1 win that saw Lyon crowned as champions of France for the first time.

It was a euphoric eruption of long-awaited success, as decades of frustration poured out in the celebrations. Anderson had been at the heart of the triumph with 18 goals in all competitions and led the club’s scoring charts again in 2002/03 as the title was defended.

Lyon finished just a single point above Monaco in another tightly-contested race for the championship, in what proved Anderson’s final season with the club.

He departed with a record of 94 goals in 161 appearances for Lyon, whilst he left France having won the league title on three occasions and as a three-time winner of the division’s leading scorer accolade.

Anderson’s arrival was arguably the catalyst for the greatest spell of sustained success in Ligue 1 history, as Lyon recorded seven consecutive titles despite continued changes in personnel as Europe’s elite plucked their finest talent.

Anderson – who was awarded a modest return of just six caps for Brazil despite his exploits – saw his career wind down with short spells at Villarreal, Al-Rayyan and Al-Gharafa. He hung up his lethal boots for the final time in 2006, before later returning to Lyon for a fond farewell with a testimonial fixture a year later.

Some of French football’s most notorious names turned out in tribute to Anderson, the penalty-box predator that led Lyon into their golden age.