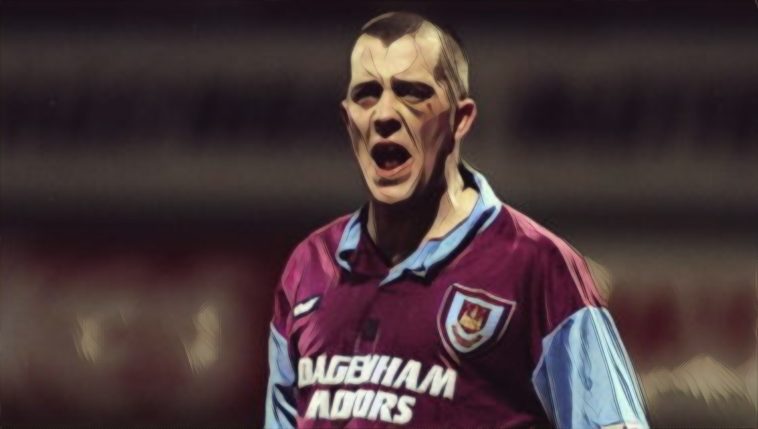 Listen to the latest episode of our brand new podcast, the 90’s Football Hall of Fame!

There has never been a footballer like Julian Dicks – a hard-as-nails bastard, set piece specialist with a peach of a left foot who played at full-back. And we’ll never see another like him again, not at the highest levels of the game anyway.

Dicks was a West Ham United legend in the nineties, helping the London outfit reach the Premier League and creating some iconic memories at Upton Park. The Bristol-born defender was a tough nut who got into his fair share of scraps, but he also scored some cracking goals during his career, becoming the club’s joint-18th all-time goalscorer during his career.

“The Hammer From Hell” made an ill-fated move to Liverpool in 1993 and an England call-up was always just out of reach, so in this episode of the podcast we ponder whether he reached his full potential as a footballer, what made him so unique as a player, and why he’s the quintessential Brit.

This podcast is hosted by Ste McGovern, Peter Henry and Anthony Kelly and is available on all platforms including Spotify and Apple Podcasts – just search ‘The Football Faithful’ on whatever podcasting app you use. You can avail of a £20 bonus when opening an account with Football Index by using the code “FF20”.

Read: Faustino Asprilla – The Newcastle legend who could win matches on his own